U.S. and Sweden in Cold War Era. Part I

The period after the end of World War II was a time when European countries had to rebuild damaged economies. Nonetheless, the Swedish economy was soaring as the country’s authorities continued to trade with both sides for most of the war. A stable economic policy was followed since the early years of the twentieth century despite two world wars. 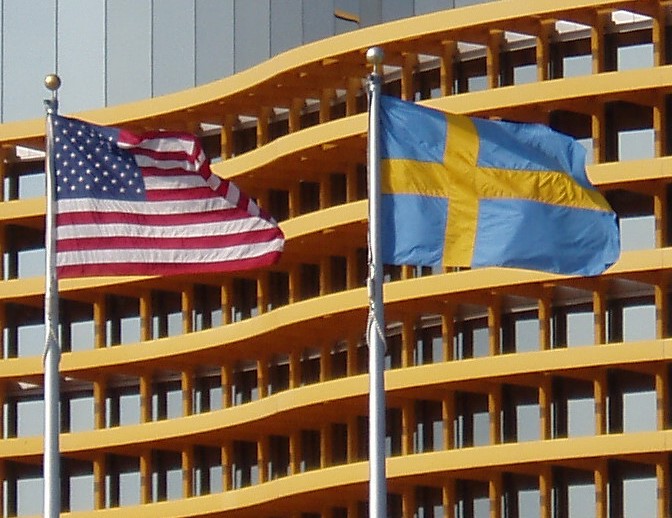 The nineteenth century brought a new meaning to neutrality in international relations. In addition to political neutrality, a state rooted in an economic or maritime policy planned well in advance that favored one of the sides, people expressed a desire to avoid wars. Neutrality emerged as a response to lengthy wars the world saw in the late eighteenth and the early nineteenth century, combined with spiritual renewal and social commitment, a behavior pattern that gave rise to religious peace movements, notably in the United States[1]. In Sweden, an increasingly liberal society took on an added importance. Two world wars voided peace efforts and the Cold War-era tension ensued. Sweden was a rare example of a country following and sticking to the policy of non-alignment. It was a tough challenge, though, especially in the face of the dynamic situation on the geopolitical chessboard. Sweden had to alter its already flexible foreign policy to attain its goals.

The period ending World War II was marked with political tension. It quickly became apparent that Europe would be torn into two conflicting blocs––the Soviet Union and its Communist client states and U.S.-led capitalist countries. The division was then sealed by the creation of the North Atlantic Alliance in 1949 and the Warsaw Pact in 1955. Significantly, countries of Scandinavia adopted a distinct foreign policy. The idea of cooperation in the Scandinavian defense bloc––born back in the nineteenth century––reemerged right after the war ended. At that time it was essential to defend these countries against possible Soviet aggression while forging military and political ties. Intense cooperation talks began in 1948, sped up by a Communist coup in Czechoslovakia. Nonetheless, the idea was ditched because of simmering tensions between the United States and the Soviet Union and distinct views on the alliance and its future goals[2].

In consequence, Norway, Iceland, and Denmark were among the founding states of NATO while Sweden continued to pursue the policy of non-alignment. Just a year before the military bloc was created, Finland signed a friendship treaty with the Soviet Union amid the situation in Europe and its location, becoming a de facto neutral state.

The period after the end of World War II was a time when European countries had to rebuild damaged economies. Nonetheless, the Swedish economy was soaring as the country’s authorities continued to trade with both sides for most of the war. A stable economic policy was followed since the early years of the twentieth century despite two world wars. Ravaged European economies unveiled a growing demand for Swedish raw materials, notably iron. Furthermore, a new post-war economic order was designed to foster both economic growth and peaceful interactions between states. It was established at the Bretton Woods Conference in 1944, where the United States was a top decision maker and guarantor. According to Jakob Tanner, “the two main institutional pillars of the new order were fixed exchange rates and – in the long term – free currency markets based on current account convertibility. In order to meet these two contradictory goals, the architects of the Bretton Woods System decided to introduce a gold-dollar standard[3].” The United States took most of the new system yet its stable position was to guarantee the development of all the countries involved. Sweden––just like other Western countries––agreed to follow it. This yet does not mean the new arrangements were unfavorable for Sweden––the country joined the system relatively quickly. Sweden also shared the benefits of the Marshall Plan.

After 1945 the country was in a good economic situation and welcomed bright development prospects. In 1946 Per Albin Hansson, Sweden’s long-standing prime minister, died unexpectedly. His efficient policy made Sweden retain its sovereignty during World War II and maintain economic growth. Sweden skilfully switched sides in the conflict––a somewhat ambiguous statement in face of its policy of neutrality and non-alignment––which sealed its friendly ties with other Western countries. An imminent U.S.-Soviet war was obvious by that time. The descending Iron Curtain––prophesied by Goebbels in a speech and then Churchill at the Fulton conference––slowly became apparent. Sweden was away from the boundary. However, its top threat was possible Soviet invasion. Soviet troops were in Finland a year before the end of the war, thus Finland was forced to sign a ceasefire deal and make some considerable concessions. Nonetheless, the country’s skillful diplomats prevented it from becoming a Soviet satellite state. Having experienced German occupation and deprived of any assistance from Sweden, Denmark and Norway could not rely on a spirit of Scandinavian unity or joint military defense. The UK-occupied Iceland was not drawn into the Scandinavian defense bloc. A top victor of World War II, the United States devised a defense policy plan for Europe. Sweden was aware of Washington’s influence and awaited tough talks. These fears were not unfounded––as Swedish foreign officials would soon find out.