John Bolton’s two-day visit to Kyiv concerned not only U.S.-Ukrainian bilateral relations, but also the Donbass problem and certain issues of Ukraine’s domestic politics. It can only be assumed that the U.S. President’s National Security Advisor agreed on an agenda for the upcoming meeting between Donald Trump and Volodymyr Zelensky, who are both to participate in the 80-anniversary celebrations of the outbreak of the Second World War in Poland. Other issues discussed included: Kyiv-Moscow relations, tasks for Ukraine’s new parliament and government as well as Chinese plans to purchase Motor Sich, a Ukrainian arms company of high strategic importance. 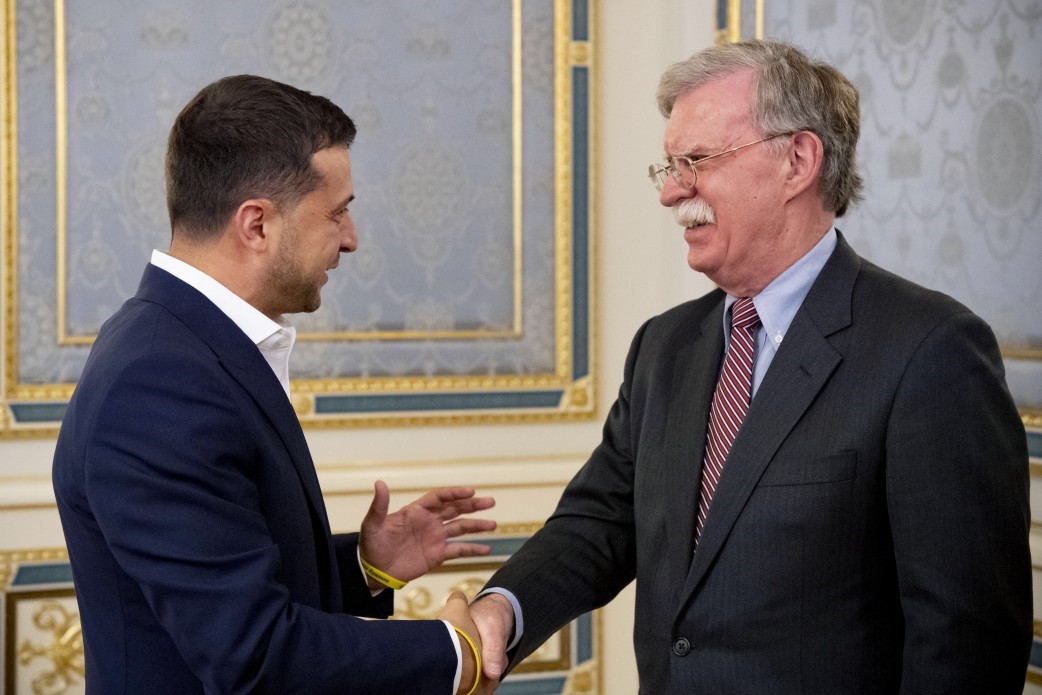 During his visit to Kyiv (August 27-28), John Bolton said in a press interview that there is no need for Volodymyr Zelensky “to rush” into taking action on Russia’s involvement in supporting separatist forces in the Donbass region. The U.S. President’s National Security Advisor stated that after forming a new government, the Ukrainian president should choose his words “very carefully” when talking with the Russians. Bolton also added that he does not think that Europeans have any obvious solutions in this matter. This was a clear reference to the Normandy format. It seems as if Washington has expressed concern over a major revival of Russian-French relations in the Ukrainian context. There is a danger that Paris (and perhaps also Berlin) will exert stronger pressure on Zelensky to give way to Russia on the Donbass.

Since winning the presidency in April 2019, Zelensky has regularly talked about calling a summit meeting of the Normandy Four and resuming talks with Russia. The Kremlin often replied that it did not oppose the idea, but it also did not set any specific date. Now, however, things have changed. Exactly one week after Macron’s meeting with Putin at the Fort de Brégançon on August 19, the French president announced that a meeting of the leaders of France, Russia, Germany and Ukraine will be held in September. Macron said that “conditions for a useful summit” have emerged. The question is what the said “conditions” actually mean. Unfortunately, this looks like a policy of making concessions to Moscow. Otherwise, the Kremlin would not agree to the meeting. It is highly probable that while in his summer residence, Macron presented Putin with some draft proposals previously consulted with Zelensky.

On August 28, after meeting with Bolton, Zelensky expressed hope that the USA could be more involved in negotiations over the Donbass. The Ukrainian president said that Kyiv would be pleased if the USA joined the Normandy format. Zelensky first mentioned the idea of expanding the format – by including not only the USA, but also the United Kingdom – already on July 8. When asked the day before the meeting with Zelensky if Washington intends to take part in the Normandy format, Bolton did not answer directly, but stated that there is a “significant American interest” in the issues between Kyiv and Moscow. What will be the end result? The upcoming Warsaw meeting between Zelensky and Trump may turn out to be a decisive factor. Nonetheless, the chances of expanding the Normandy format by including the USA are little due to the opposition of Paris and Berlin.

Bolton stated in Kyiv that what Ukraine needs most today is a determined fight against corruption. As for Ukraine’s domestic politics, he expressed hope that the new parliament will be ready to carry out significant reforms. However, it is said that Bolton’s most urgent task during his visit to Kyiv was to prevent the Ukrainians from selling the Zaporizhia-based Motor Sich company to the Chinese holding Beijing Skyrizon Aviation. It is one of the largest engine manufacturers for military transport airplanes and helicopters worldwide. The Americans fear that the transaction would allow Beijing to gain access to new defence technology. Finishing his visit to Ukraine, Bolton warned the state authorities against cooperation with China.