The Polish president arrived in the United States to pay what was called the best visit for many years, marking yet another significant step in cementing the alliance between the two countries. What was agreed by Trump and Duda bolstered Poland’s position as Washington’s key partner on NATO’s eastern flank and one of its few important allies across Europe. Importantly, this is a multilateral alliance that embraces something more than just the army and aircraft. Thanks to the United States, we build our energy security. And this cooperation benefits both sides. 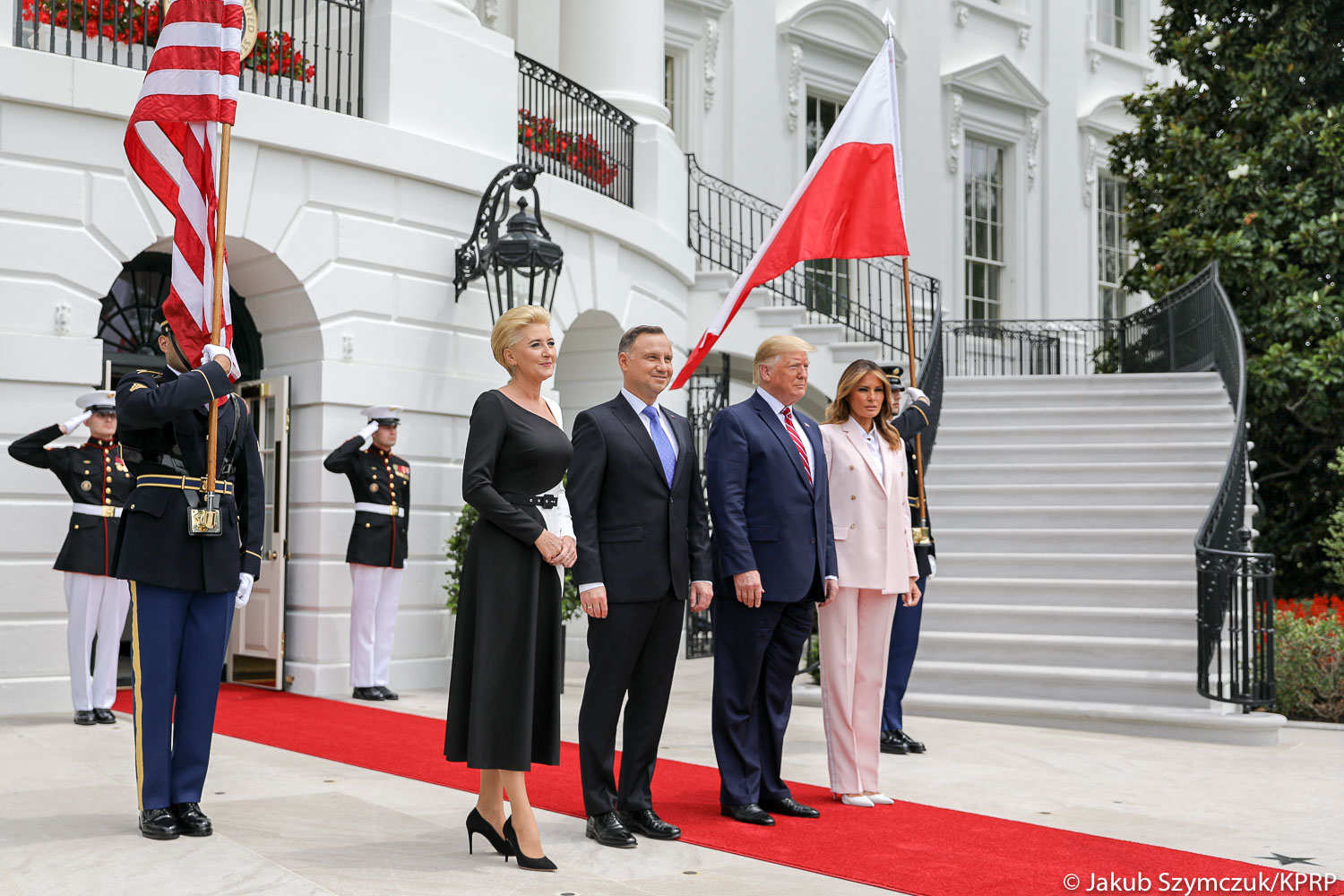 Poland has courted the United States for a large military base, but Washington’s military presence will, at least for now, not come in the form of army barracks. As jointly agreed by the two leaders, Washington will soon send an additional 1,000 soldiers to Poland, all of whom will arrive in the country as almost 4,500 U.S. servicemen already deployed to Poland. What is most significant is that the military presence of the U.S. ally on Polish soil will facilitate further deployments, both swiftly and efficiently. The key is to increase the quality of a contingent being sent to Poland rather than its size.

As the Polish President Andrzej Duda visited the White House on June 12, the United States officially declared its plan to establish a forward-deployed division headquarters in Poland. For its part, Warsaw has confirmed its willingness to buy over 30 fifth generation F-35 fighter jets. But a batch of flying unarmed MQ-9 Reaper surveillance drones is expected to be delivered sooner to the country under a joint declaration on defense signed by the American and Polish leaders. Reports on purchasing MQ-9s and F-35s raised the ire of Russia and its „useful idiots” in Poland and not incidentally, most criticism centered on how purposeless they considered Poland’s plans to buy U.S.-made weapons. And this is no coincidence as F-35s are not to be equated to any other warplanes while MQ-9s, by some dubbed „deadly”, have long been spreading terror. Both are poised to limit Moscow’s offensive capabilities in our region while boosting our security and that of other countries.

Trump’s decision to boost the number of U.S. troops in Poland was welcomed by Baltic and NATO officials, with NATO Secretary-General Jens Stoltenberg at the forefront. Foreign or defense ministers of Lithuania, Latvia and Estonia rushed to congratulate on the U.S.-Polish military deal as, in their eyes, Poland and allied forces stationed on its soil are the main guarantee of their security. „This is an important step and display of U.S. commitment to European security and deterrence. Estonia wholeheartedly embraces this decision that goes to further strengthen the transatlantic bond and cooperation between NATO allies,” Estonian Foreign Minister Urmas Reinsalu said in a tweet. Lithuanian Foreign Minister Linas Linkevicius echoed the viewpoint in a tweet, saying the decision contributes to the „Alliance’s deterrence and defense posture and benefiting the security of all NATO allies.”

What was concluded during the Trump-Duda meeting was viewed differently in two capitals, Moscow and Berlin, the latter of which is, interestingly, the capital of a NATO member state. Officially, an additional 1,000 troops will be sent to Poland, but Trump said that 2,000 U.S. soldiers will be „shifted from another country”, which prompts transferring them out of neighboring Germany, with the U.S. President rejecting an idea of boosting the number of American troops in Europe. Unlike Germany, Poland is among seven NATO countries to have elevated defense expenditure to NATO’s benchmark of 2 percent of the country’s GDP. Trump has been known for slamming his European allies for their unwillingness to bolster their defense spending. Following the NATO Wales Summit in 2014, the Alliance’s member states committed themselves to allocate 2 percent of their GDP by 2024.

This will not put an end to an idea of housing an extra U.S. battalion, instead of marking yet another significant, also symbolically, step for cementing the alliance. Trump weighed his words so as not to criticize Russia too much and avoided overt declarations of adding more troops abroad. But the fact remains that Poland has attained its goal, with Washington’s clear message that Warsaw is the best and the closest partner of the United States in Europe.

Louisiana instead of Siberia

As President Andrzej Duda visited the United States, Poland’s state-owned gas giant PGNiG signed a new contract that would extend the volume of liquefied natural gas (LNG) deliveries. Under the agreement, the Polish gas firm would purchase an additional 1.5 million tons of LNG per year from the planned Plaquemines LNG export facility, owned by Venture Global LNG. The contract has been concluded for 20 years. U.S. Energy Secretary Rick Perry joined the Polish leader in the Sabine Pass LNG terminal who arrived there to tour the gas facility, from where LNG deliveries had in the past been shipped to Poland. Earlier on, Andrzej Duda had paid a visit to America’s oil capital of Houston, meeting with the representatives of American energy corporations.

U.S.-Polish LNG contracts, either planned or inked, will in fact shut down Russian gas supplies to Poland in their current form, with a predetermined number of deliveries. After the Yamal agreement expires in 2022, Poland will be able to buy fewer gas volumes from Russia, or completely deny such transactions, on the basis of short-term flexible contracts. Two years have passed since the first tanker carrying American liquefied natural gas came to the LNG terminal in Świnoujście, with Poland making attempts to dispel the myth that U.S.-sourced LNG is much more costly that Russian gas pumped through the Yamal gas pipeline. This is not true. All experts and politicians lied, claiming that importing gas from the United States is by no means profitable while saying that Russian-sourced energy is cheaper. On the contrary, it is expensive and Poland, by boosting its LNG imports from overseas, increases its energy security and gains substantial financial profits. Although indirectly admitted by Donald Trump, the new energy deal will cost Poland less that its hitherto gas contract with Russia.

The outcomes of Duda’s six-day trip to the United States bring considerable benefits both for bilateral ties between Poland and the United States while exerting a positive impact for our region. Not incidentally, our Baltic neighbors warmly greeted Trump’s decision to send more troops to Poland. And boosting gas shipments may safeguard energy security of Poland, its peers from the Visegrad Group and Ukraine. In the future, we may be capable of importing so much liquefied natural gas, added to that raw material pumped through Baltic Pipeline and our increased domestic output, that Poland could re-export some of its supplies elsewhere, including Ukraine. In May, the chief executive of Ukraine’s state-run gas company Naftogaz visited Washington where he held talks on importing U.S.-sourced gas through Poland to Ukraine.

Importantly, speaking of the two major areas of the U.S.-Polish alliance, we can observe that not only one party is interested in tightening economic and military bonds. Warsaw is not a petitioner begging for more U.S. troops or seeking to overpay for Washington’s military assistance or its LNG deliveries. This arrangement benefits the United States, giving greater confidence in adhering to the principle of pacta sunt servanda („agreements must be kept”). U.S. energy business, mainly based in Louisiana and Texas, shows a lively interest in developing its LNG exports to Europe and enjoys the full support of the presidential administration, all the more so that Donald Trump runs a state policy in the same way he ran business. Under Obama’s term in office, hydrocarbon exports from the United States were hindered. Świnoujście may emerge as Washington’s gateway to Central and Eastern Europe. Adding more U.S. troops also pays off for the same reason because Washington has many times seen that withdrawing its forces from Europe leads to catastrophic consequences, after which the U.S. Army comes back to the Old Continent. Prevention is better than cure.

It seems that Poland’s alliance with the United States is primarily targeted at Russia, with Warsaw aiming to show Moscow that it can correctly do without its gas supplies and will not feel intimidated by Russian missiles, as went Trump’s message in a great extent directed to Germany. Naturally, this is about the Nord Stream 2 energy pipeline and gas shipments, as the American leader has long emphasized. But it is noteworthy that Berlin could be frightened with an idea of transferring some of the American troops out of Germany further to Poland. And Germany does not like as such a plan triggers financial losses and weakens its status. The post-Cold War era is over, with no division into Russia and the West. Today, we have the United States, Poland, the Baltic States or Ukraine on the other hand, while Russia and Germany on the other.