A Thaw in Relations Between Warsaw and Beijing?

In 2021, we may observe a gradual improvement in relations between Warsaw and Beijing. This is indicated by a number of factors, most notably the increasing frequency of talks and high-level meetings, during which more openness to cooperation and the maintenance of current joint initiatives was expressed. However, this is not synonymous with a change of course in Poland’s foreign policy. 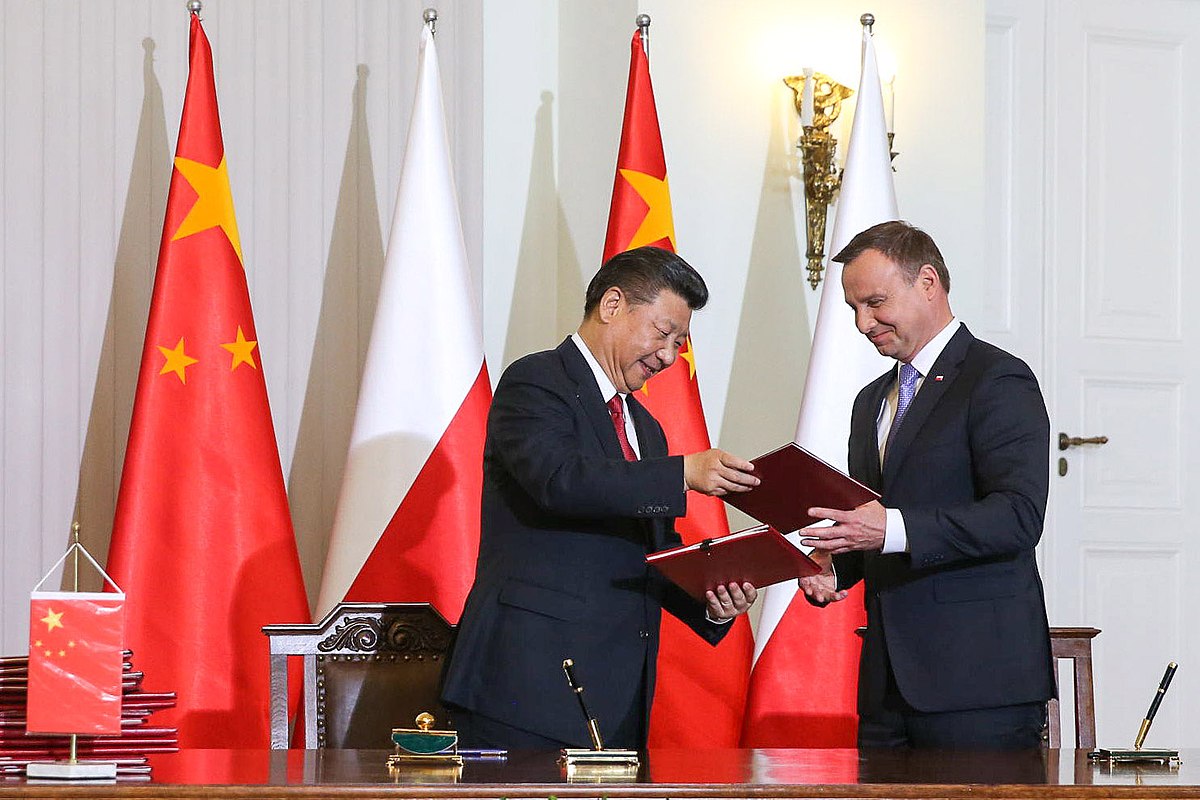 On January 22, the Polish Minister of Foreign Affairs Zbigniew Rau held a telephone conversation with his Chinese counterpart Wang Yi. The discussion was devoted to plans to activate bilateral and multilateral cooperation in 2021. Rau pointed out that pragmatic economic cooperation remains the foundation of the Polish-Chinese strategic partnership and expressed hope for liberalized access of Polish products and services to the Chinese market. This was the first, still tentative, beginning of an increasingly frequent, as it later turned out, contact between Warsaw and Beijing.

On February 9, a several-hour long virtual summit of the leaders of the states belonging to the 17+1 initiative, i.e., China and Central and Eastern European Countries (CEECs), was held. The Chinese side was represented, for the first time in the history of the format, by the President of the People’s Republic of China (PRC), Xi Jinping, while the Polish side by President Andrzej Duda, i.e., one of the top-level officials (which was not the rule to date). Although the list of agreements published by the Chinese Ministry of Foreign Affairs after the summit did not include any trade agreements with Poland, the very fact that the President took part in the summit indicates Poland’s interest in this initiative.

Nearly a month later, on March 1, Polish President Andrzej Duda held a telephone conversation with the President of the PRC Xi Jinping. President Duda congratulated the Chinese leader on the organization of the 17+1 summit and emphasized that his participation in the meeting was a confirmation of the willingness to maintain intensive relations with the PRC. The leaders discussed economic issues and the importance of the Polish transport infrastructure, especially railroads, for the development of trade between Europe and China, as well as the matter of the EU-China investment agreement. President Xi invited the Polish President Andrzej Duda to pay a state visit to China. The most interesting passage, bolded on the website of the President’s Chancellery, was the following: “at the request of Prime Minister Mateusz Morawiecki, the president also raised the question of Polish-Chinese cooperation in the fight against the coronavirus pandemic, including the possibility of Poland purchasing vaccines produced in China.” This was a public indication of interest in Chinese COVID-19 vaccines.

Xi Jinping told Andrzej Duda that the two countries should strengthen strategic communication “to deepen pragmatic cooperation to jointly deal with every risk and challenge.” According to a statement of the Chinese Ministry of Foreign Affairs, Xi also promised to share the Chinese experience in the fight against the pandemic and provide vaccines “according to the needs of Poland and within the limits of China’s capabilities”.

On March 9, Minister Zbigniew Rau spoke on the telephone with the Foreign Minister of the PRC Wang Yi. According to information from the Chinese Ministry of Foreign Affairs, the conversation was initiated by the Polish side. The Ministers referred to the recent talk between the President of the Republic of Poland and the President of the PRC as well as to the summit of the leaders of CEECs and China (17+1), which took place on February 9. Minister Rau noted with satisfaction the declaration of the Chinese partner to make Chinese vaccines a global public good and appreciated the cooperation with Beijing in the fight against the pandemic.

The head of the Chinese Foreign Ministry said that it is necessary to diligently plan and actively expand exchanges and cooperation in various fields in the times of the pandemic, so that the relations between China and Poland become an impetus for China-Central and Eastern Europe collaboration. He reminded that China is initiating international partnership in terms of vaccines due to other countries’ needs, without any political conditions or own interests.

Wang Yi also briefed the Polish side on China’s position on Hong Kong and Xinjiang issues, stressing that non-interference in the internal affairs of other states is enshrined in the UN Charter.
On March 24, Polish President Andrzej Duda spoke on the telephone with President of the PRC Xi Jinping. According to the Chancellery of the President, the conversation lasted 45 minutes. Andrzej Duda expressed interest in the Chinese proposal to hold a videoconference with medical experts from Poland, China and interested states. It was then mentioned that a special plane was to fly from Warsaw to Beijing, and return on March 26 with medical equipment donated by the Chinese side.

Xi Jinping pointed out that Poland is a crucial Central and Eastern European country, an important member of the European Union and a comprehensive strategic partner of China in Europe. The CCP authorities are also ready to provide Poland with COVID-19 vaccines, within their capabilities and according to the country’s demand. Moreover, Xi Jinping mentioned the great potential of economic and trade cooperation between the two sides, promising to increase imports of high-quality agri-food products from Poland by establishing relevant mechanisms under the China-CEECs cooperation. According to a press release of the Chinese Foreign Ministry, Andrzej Duda said that he is looking forward to visiting China again after the pandemic ends. According to it, the President said “I am willing to maintain close and friendly exchanges with President Xi Jinping to jointly lift Poland-China relations to a new level.” Such statement was not included in the Polish communiqué.

On April 22, Wang Yang, a member of the Politburo Standing Committee and Chairman of the Chinese People’s Political Consultative Conference (CPPCC), attended a video call with Tomasz Grodzki, Marshal of the Polish Senate. The conversation took place at the initiative of the Chinese side, as stated on the website of the Polish Senate. A more extensive press release about the meeting was prepared by the Polish side. During the meeting, Wang Yang said that activities aiming to raise the level of strategic partnership between Poland and China can be planned.

Chairman Yang stressed the importance of over 70-year-long history of diplomatic relations between Poland and the PRC, assessing their current state as good. He drew attention to the cooperation during the pandemic and the potential of bilateral economic partnership, resulting from the data. According to him, Poland and China should put emphasis on new areas of collaboration – medicine, new technologies, digital economy and environmental protection. In his opinion, “in these areas Poland is a priority partner for China in Europe.”
Senate Marshal Tomasz Grodzki expressed concern over Poland’s high trade deficit with China, which currently stands at over $33 billion. He pointed out the need to ease travelling for Polish entrepreneurs, which would significantly facilitate business contacts, to which Yang expressed openness. Similarly to Chairman Yang, Senate Marshal Tomasz Grodzki expressed his willingness to cooperate on environmental protection. Moreover, he shared Poland’s concern about the situation in China’s Xinjiang region, Hong Kong, and Tibet (this passage was missing in the Chinese media).

On May 29, a meeting between the Minister of Foreign Affairs of Poland Zbigniew Rau and Minister Wang Yi took place in Guiyang (Guizhou Province) in China. At the same time, the Foreign Ministers of Serbia, Hungary and Ireland arrived for talks in the same location. According to a concise communiqué of the Polish Foreign Ministry, the discussion included: the agenda of Polish-Chinese relations, the future of the 17+1 initiative and the prospects for EU-China cooperation. The Ministers confirmed that the third meeting of the Poland-China Intergovernmental Committee will be held in the second half of 2021. The communiqué of the Chinese Ministry of Foreign Affairs mentioned the synergy between the 14th Five-Year Plan and the recently announced Polish Deal.

China was the first Asian country visited by Minister Rau after taking over as the head of the Polish Foreign Ministry. Possible reasons for inviting the Polish Minister to Beijing include consultations on 5G technology legislation or the trial of former Huawei’s sales director, accused of spying for China.

It is also worth mentioning that in April 2021, the Chinese Ambassador to Poland Liu Guangyuan ended his mission. In May, he was appointed a Commissioner of the Ministry of Foreign Affairs in the Hong Kong Special Administrative Region (HKSAR). A nomination to such an important position indicates that he has proven himself in Poland and has done good work for the CCP. New Chinese Ambassador to Poland has not been appointed to date.

Although the meetings and talks were not groundbreaking, their intensity was very high, indicating that both sides are actively trying to improve partnership. The Chinese press releases that followed the meetings were more optimistic, but this type of embellishment is common for the diplomacy of the CCP.
An information about a possible purchase of Chinese vaccines by Poland seems to be a diplomatic maneuver of the Polish side, since the Polish government has managed to purchase a sufficient number of jabs from Western manufacturers to satisfy the domestic demand. Poland’s mere intention to do so put Beijing in a better light in terms of the vaccine diplomacy, which it could use in its media coverage.

Furthermore, China is trying to sustain the 17+1 format. Lithuania had already announced that it will leave the initiative and other countries in the region are still looking for tangible reasons to remain in the group. The 17+1 format has so far been unanimously assessed as an initiative that has failed to meet the hopes and expectations of the states in the region. Hence the increased activity of Chinese diplomacy. Poland, however, has given a clear signal that it would remain committed to the initiative.
A sign of a rapprochement in relations between Beijing and Warsaw is the deterioration of Polish-American ties during Joe Biden’s presidency. The Polish side may be sending a message to the US that it can and will seek cooperation also with the adversaries of America. Given the central role of the US in Europe’s security architecture, the rapprochement may be mainly, if not exclusively, economic. According to China Customs, in 2020, for the first time, trade between Poland and China exceeded $30 billion, with a year-on-year growth rate of 12%.

However, the political thaw described above does not mean that the course of Polish foreign policy would change. It is still pro-American. Poland has already rejected the possibility of greater Chinese involvement in the construction of the Solidarity Transport Hub Poland (Central Transportation Port, or CPK) and has taken initial steps to restrict Huawei’s access to 5G infrastructure development. China has also failed to appoint a new ambassador to Poland. The deepened strategic cooperation between Beijing and Moscow is also a concern for Warsaw.