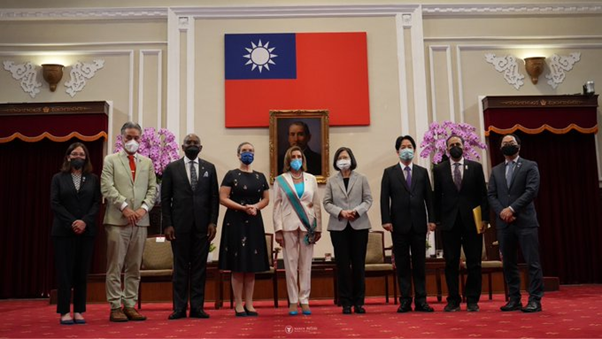 The “one China ” policy has had two different connotations historically constructed after 1949. The One-China policy of the United States is not the same thing as the One-China principle of the People’s Republic of China (PRC). Whilst the PRC definition of the ‘One-China’ principle for international consumption is that, “there is only one China in the world, Taiwan is a part of China and the government of the PRC is the sole legal government representing the whole of China.”[1] Since 1949, the U.S. One-China policy has addressed the existence of two rival governments: the PRC in Beijing and the Republic of China (ROC) in Taipei.[2]

The U.S.House of Representatives Speaker Nancy Pelosi departed on Sunday the 31st of July to the Indo-Pacific region. The congressional delegation she’s leading has scheduled visits to Singapore, Malaysia, South Korea and Japan, with a “focus on mutual security, economic partnership and democratic governance in the Indo-Pacific region.”[3] The delegation’s first official stop took place in Singapore on Monday the 1st of August and although not explicitly mentioned within the official list, her recent landing in Taiwan on Tuesday has magnified the already existing tension between Washington and Beijing.

Pelosi was supposed to visit Taiwan in April but the trip was postponed after she contracted Covid-19. Days before the commencement of the Indo-Pacific tour, Chinese foreign ministry spokesman Zhao Lijian warned on Monday the 25th of July that China would take “firm and resolute measures” if Ms. Pelosi went ahead with her visit. It is without surprise that these warnings were raised days prior to Ms. Pelosi’s beginning of her tour as her congressional career has spanned over 35 years as a vocal critic of China’s domestic and foreign policies.[4] Almost 31 years ago, in 1991, Pelosi visited Tiananmen Square to render homage to the protesters who died during the demonstrations against the Communist regime two years prior. Since then, Pelosi has extended numerous concerns to the regime in China through several means including the denied ‘Letters to Hu’, ‘The Olympic Manoeuvres’ – whereby, “Ms. Pelosi has opposed China’s bids to host the Olympics Games as far back as 1993 on the basis of its alleged human rights abuses.”[5]

Pelosi’s stop in Taiwan marks her visit as the latest highest-ranking elected U.S. official to visit the island since then-speaker Newt Gingrich (R) went in 1997. However, the visit of the US House Representative Speaker is differentiated from other Congressional delegations due to her standing in the presidential line just after Vice-president Kamala Harris.  During her visit, Pelosi vowed U.S. support for Taiwan. According to Pelosi’s  congressional delegation,  the visit “honors America’s unwavering commitment to supporting Taiwan’s vibrant democracy.”[6] During the upcoming days, her agenda will encompass several visits to historic sites and receptions with high-level officials. For the U.S., “Taiwan is the eighth-largest trading partner, and the United States is Taiwan’s second-largest trading partner.”[7] But the economic remarks are equally important to the geopolitical concerns at times when the transpacific tensions have hit the lowest. As an important strategic geographical mark in the Indo-Pacific, Taiwan geopolitical well-being has become an American priority.

Early this week, Beijing warned of a ‘military’ reaction if U.S. House Speaker Nancy Pelosi visits Taiwan. On its counterpart, the U.S. has deployed ships and planes near Taiwan.[8] Despite Beijing’s warming, the visit took place, and upon Pelosi’s landing in Taipei “the People’s Liberation Army announced plans for extensive joint air and naval drills and long-range live fire shooting exercises in six large areas around Taiwan, which extend into the country’s territorial waters and airspace near Kaohsiung and Keelung, its largest and third-largest ports.”[9] According to the progressive attitude towards Pelosi’s visit, analysts believe that President Xi would want to show “a strong response to any sign the U.S. is moving to support Taiwanese independence, in part because he is seeking a norm-breaking third term in office this fall”[10]  The expectations revolve around the use of propaganda to dominate the media narratives and the use of official statements to signal discontent. However, diplomatic and economic coercion is to be expected in the days to come.