Syria. No prospects for ending the civil war

The ongoing war in Syria is nothing like the revolution that took place 10 years ago. Parts of the country’s territory are controlled by the armed forces of Russia, Turkey, the USA, the Iran’s Islamic Revolutionary Guard Corps, jihadists and Afghan, Pakistani, Lebanese and Iraqi mercenaries. An agreement between President Bashar al-Assad and his opponents seems impossible to reach. In the perspective of the next few years, the war will continue and the price for the actions of foreign troops in the country will be borne by the Syrian people. 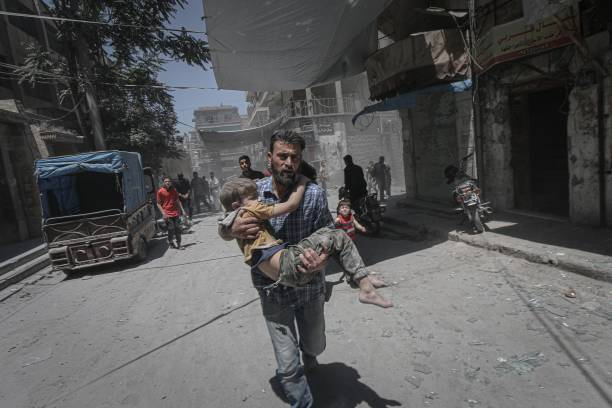 The conflict, which began in 2011, has had considerable repercussions for the countries of the Middle East and continues to affect the international situation[1]. The uncontrolled influx of Syrian refugees fleeing al-Assad’s regime has destabilized Syria’s neighbors, polarized Europe and caused conflict between the United States and Turkey.

The ongoing struggle can be divided into three areas: efforts to defeat the Islamic State, battles between the government and opposition forces, and Turkish military operations against Syrian Kurds.

The UN has estimated that more than 400,000 people have been killed in Syria since the start of the war[2]. Since January 2019, more than 5.6 million Syrians have fled the country and 6 million have been internally displaced. Refugees have sought shelter in Jordan and Lebanon straining the already weak infrastructure of these countries and limited aid resources. More than 3 million have fled to Turkey and hundreds of thousands have migrated to Europe[3]. In 2017, the cost of rebuilding the devastated country was estimated at $250 billion[4].

Diplomatic efforts to end the fighting have failed. Geneva peace talks supported by the UN Secretary-General’s Special Envoy for Syria Staffan de Mistura failed to produce the expected result and a political solution was not reached[5]. In May 2017, a new round of talks came to a standstill. In the same year, Russia initiated negotiations in Astana with Iran, Turkey and members of the Syrian government and seconded opposition leaders. The ongoing talks led to a ceasefire and the establishment of four de-escalation zones[6]. The cessation of fighting did not last long, shortly after the agreement was signed government forces resumed attacks on rebel positions.

The destabilization of Syria has provided a safe haven for Salafi jihadists, allowed Russia to build a foothold in the Middle East, enabled Iran’s regional expansion and escalation of its conflict with Israel, and undermined the sense of international law on weapons of mass destruction. The international community has done little to mitigate the damage caused by the war in Syria or to create the conditions for its resolution. Continued external intervention offers no prospect of a quick end to the ongoing war.