On Tuesday, 15.10.2019, The Warsaw Institute Review (WIR) held a “Strategy Duologues on Geopolitics” meeting at Embassy of the Republic of Turkey in Warsaw. It comes at a particularly important time, during recent developments pertaining to Turkey’s role in northern Syria. 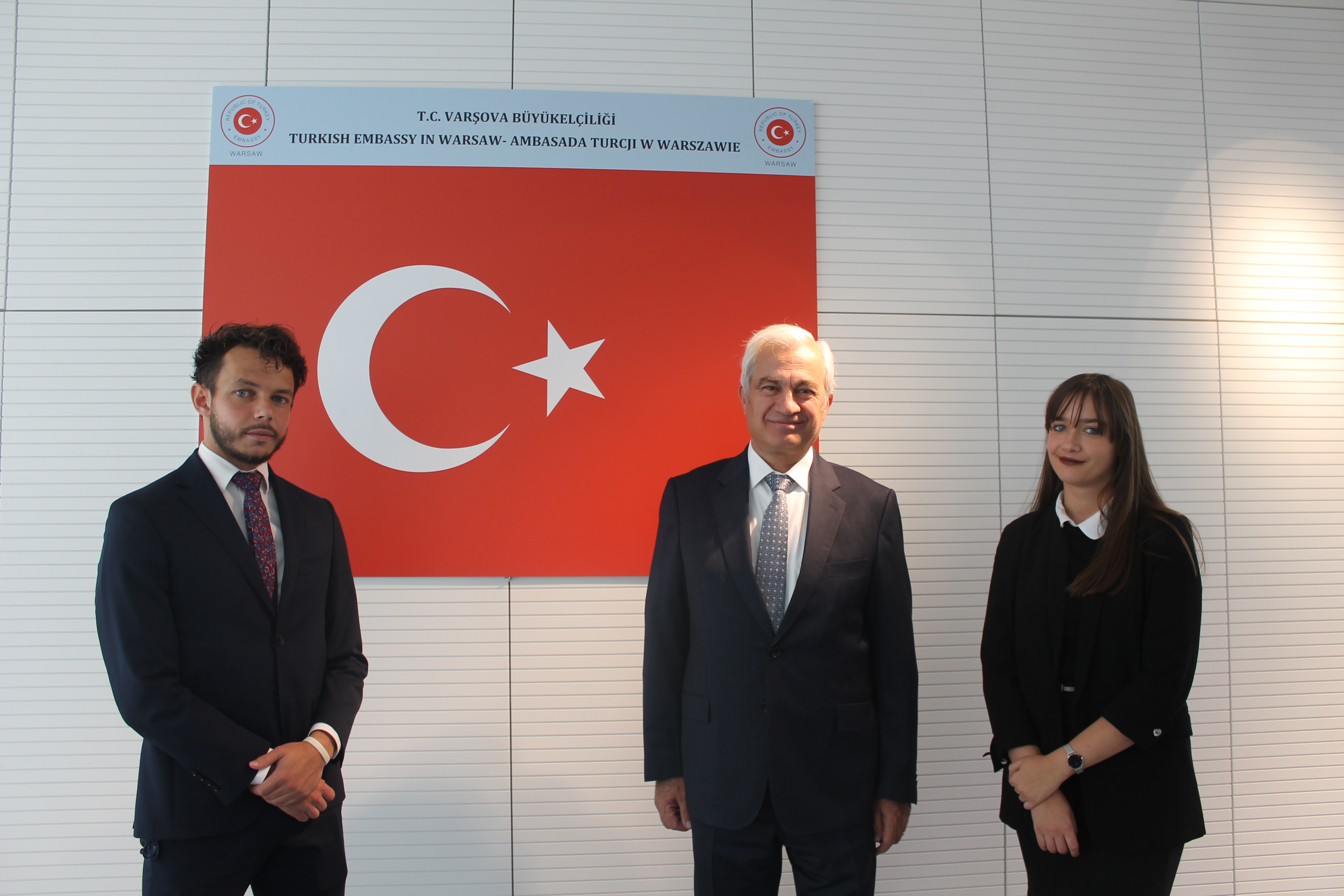 Leading the discussion from the side of the Embassy was the Ambassador Extraordinary and Plenipotentiary of the Republic of Turkey to the Republic of Poland HE Mr. Tahsin Tunç Üğdül, alongside other colleagues.Representing the quarterly and think tank were Warsaw Institute (WI) Events Coordinator Ms. Julia Grzybowska, WIR Advisor Mr. Alexander Wielgos, and WIR Communications Specialist Mr. Łukasz Biernacki.

Putting the meeting into context, the discussion first went over the remarkable bilateral relations of Turkey and Poland, formally dating back at least since 1414. This is the longest standing bilateral relations of Poland. These 605 years have been marked with continuous respect between both nations, demonstrated time and time again on various occasions. In these 605 years, only 25 years have been in conflict, relevant to great power geopolitical dynamics. Even then, the incredible respect for one another was maintained e.g., especially after the Battle of Vienna of 1683, it was the Turks who called Jan III Sobieski the ‘Lion of Lechistan’.

Further attesting to this mutual respect was the fact that, after the partitions of Poland, culminating in the third partition of 1795, it was refuted by the Ottoman Empire, which refused to recognise it. Moreover, during negotiations between representatives of states in the Ottoman Empire, at the table there would be one symbolic, empty seat. In front of it, a flag of Poland. Turkish representatives would insist the Polish representative was still on the way. This custom remained all the way until Poland regained independence in 1918.

In 1920, diplomatic missions were re-formalised. After the Republic of Turkey was founded 29.10.1923, and the subsequent reforms followed, in 1930, the diplomatic missions were elevated to the rank of legation, from which Ambassadors have been present in both capitals. Furthermore, during World War 2, German officers went to Turkish authorities, demanding entry into the Polish Embassy in Ankara. The Turkish authorities incessantly denied these demands, and refused to give up the keys to the Embassy.

Interestingly, there is a Polish village in Turkey called Polonezköy, or Adampol, close to Istanbul, founded in 1842. It features restaurants with traditional Polish cuisine, architecture, churches, and Polish festivals. The mayor is traditionally a Pole or from Polish descent. Furthermore, there is also a historic house museum in Istanbul dedicated to Adam Mickiewicz called “dam Mickiewicz Müzesi”, located in a house in which Adam Mickiewicz lived after he came to Turkey in 1855 to organise Polish forces under the Ottoman army, and also subsequently died. He befriended Michał Czajkowski, or Sadık Paşa, who was active in what became Adampol.

It is also worth noting, that Turkey declared a National Day of Mourning after the April 2010 Smoleńsk tragedy.

Naturally, all these things, amongst many others, which highlight the historic and respectful relations between Poland and Turkey, ought to be recalled, most particularly when discussing a sensitive and complex topic, on which there is much disagreement from many actors around the world.

For context, the US had withdrawn their forces 06.10.2019 from north-eastern Syria and green lighted Operation Peace Spring, beginning 09.10.2019, igniting clashes between the Syrian Democratic Forces (SDF) and the Turkish military, as well other state and non-state actors involved in this part of the conflict.

Thus, this ‘Strategy Duologue’ meeting was pertinent to hearing the perspective of Turkey, and get a better understanding of the reasons behind the actions undertaken, and why the perception of Turkey differs from those who criticise it.

In the meetings, as colloquially referred to in short, “Strategy Duologues”, or simply “Duologues”, both sides discuss previously agreed upon topics pertinent to geopolitics and ‘geostrategic’ themes. They examine in which ways the understanding is similar or different from the perspective of the Embassy and from the perspective of think-tanks/quarterlies in general, and of course, specifically that of WIR.

Strategy Duologues are small meetings between representatives of WIR and representatives of Embassies which are pertinent to Poland and her partners. In these meetings, participants discuss geopolitical developments which are relevant to both their countries, the bilateral relations between these countries, and finally, exploring means of cooperation on the think-tank/quarterly and Embassy levels to further enhance ties between the two countries and regions.

Hence, the Strategy Duologue with the Embassy of the Republic of Turkey in Warsaw was the seventh Duologue in this initiative, and the second with an Embassy of a country in the Middle East North Africa (MENA) region.