Sechin Invites India to the Arctic

The huge Vostok Oil project was a key issue of discussion when India’s oil and gas minister sat down for talks with Rosneft’s Igor Sechin. Shri Hardeep S Puri arrived in Vladivostok to take part in the Eastern Economic Forum. He made a stop-over in Moscow to meet Sechin before heading to the Russian Far East. 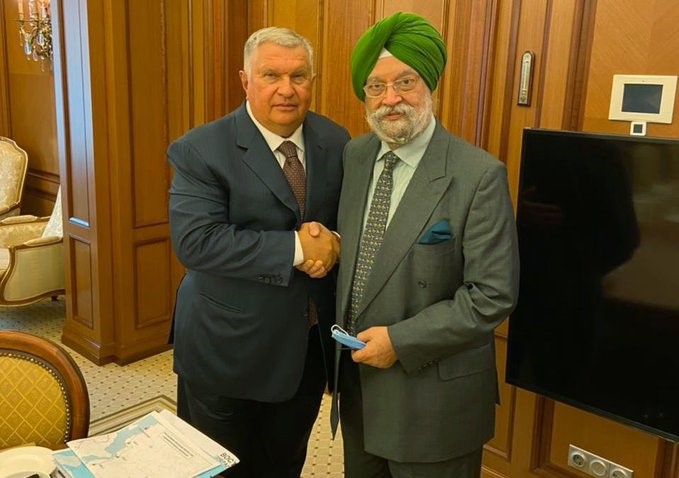 Sechin and his Indian guest discussed mainly Rosneft’s flagship project in the Arctic, Vostok Oil. “We held very productive discussions on further strengthening our strategic partnership with Russia in the energy sector,” Minister Puri said in a comment after the meeting. It is known that Igor Sechin had prepared a major presentation of his company’s new top priority project, the Vostok Oil. According to the oil company leader, Vostok Oil is one of the most prospective oil production projects in the world. It includes 52 license areas with a resource base of more than 6 billion tons of oil. “By 2033, extraction is projected to reach a level of 115 million tons,” Sechin said, adding that Vostok Oil can simultaneously supply resources from the fields in two directions, both to the European and Asian markets. Rosneft counts on India’s involvement in the project. In early 2020, it was made clear by the former Indian energy minister. Vostok Oil was on the agenda also during the meeting between Vladimir Putin and Indian Prime Minister Narendra Modi in 2019. Rosneft’s project is being developed in the country’s far northern Taymyr Peninsula as the Yenisey River flows into the Kara Sea. According to the company, the project will include the building of 15 new industry towns, three airports, about 800 kilometers of new pipelines, and 3,500 kilometers of new electricity lines. In May this year, the first ships loaded with construction materials sailed into the Yenisey Bay. Vostok is what the Kremlin––and thus the government––sees as its priority. It is not only about Sechin’s cordial ties with Putin, which gave Rosneft some outstanding tax reliefs. Vostok Oil is set to become a key element for industrial facilities in the Northern Sea Route as the link is one of the priorities of Vladimir Putin. Sechin convinced Putin that without Vostok Oil’s massive production, there would not be enough crude for sea exports from the Russian Arctic to develop the Northern Sea Route.