Russia’s Offensive On Donbas Has Begun

The Russian military command launched an operation in Ukraine’s Donbas while not waiting for the fall of Mariupol. The aggressor’s top mission is to smash the best-equipped Ukrainian units and seize at least the whole Donetsk and Luhansk regions, which would be what the Kremlin meant while recognizing the so-called “people’s republics” in Donbas. 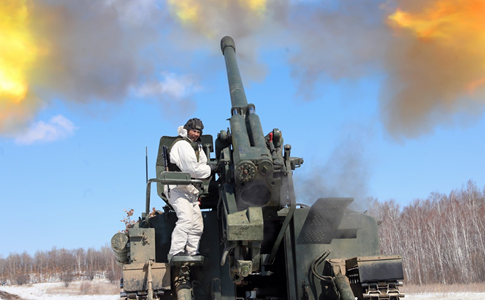 Russian forces have started the battle for Donbas, Ukrainian President Volodymyr Zelensky said in a video address late on April 18. The Ukrainian president said the aggressor was mounting a more rational assault than before. Russian forces are looking for the weakest spots of the Ukrainian military to hit them fully. Since the morning of April 18, Russian troops have started “an attempt” to break through Ukrainian positions around Donetsk, Luhansk, and Kharkiv. Russia is mounting the biggest attack from the town of Izium towards Sloviansk. “The second phase of the war has begun,” the Ukrainian president’s chief of staff, Andriy Yermak, wrote earlier. What might hint at the beginning of the Russian offensive is more air raids in many spots around Ukraine. Fighting has intensified in Kyiv and Chernihiv. Russian rockets smashed into the western Ukrainian city of Lviv and the Zaporizhia and Dnipro regions. Russian forces have intensified air strikes by 50 percent in recent days. Several Ukrainian units are still fighting the Russians in Mariupol, including the Marine Brigade and the Azov Regiment. Their holdout is at the city’s Azovstal steel plant. Ukraine’s fierce resistance in the biggest Kyiv-controlled city in Donbas past 2014 stalls several thousand Russian soldiers that cannot join the main offensive in the north of the Donetsk and Luhansk regions. Although the Ukrainian president and the military say Russia has started an offensive in Donbas, it now seems far from the main strike. Russia has not massed its second-round troops from Crimea and the Rostov region that borders Donbas. They will not be ready until next week, according to Ukrainian’s general staff.