Russian Strategic Bombers In Syria Are A Problem For NATO

Russia said it had the ability for the first time to operate long-range strategic nuclear-capable bombers from its air base in Syria. The Hmeymim airfield was upgraded allowing Russia to manage long-range aircraft from the base, also Tupolev Tu-22M3 bombers. Three long-range bombers of that type had flown to Hmeymim. They would hold training exercises in new geographical areas over the Mediterranean Sea before returning to their permanent airfields in Russia. 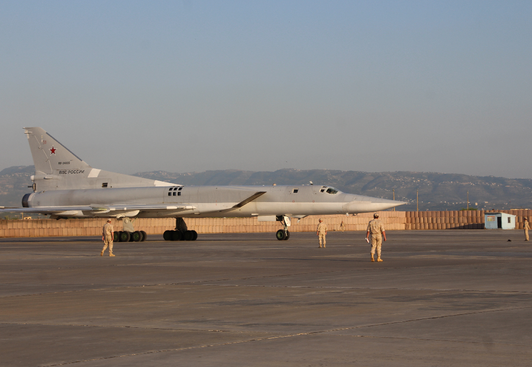 At the Hmeymim military base, works were completed to reconstruct the second runway and install new lighting and radio equipment. Runways at the base had been made longer by some 300 meters and are now 3,200 meters long so that the base could manage large aircraft. Russia now can handle aircraft of all types from the base, according to the country’s defense ministry. Naturally, the Hmeymim base is essential for Russia not only for the Syrian civil war as other aircraft are doing well there. From the airfield Russian strategic bombers can make long-haul flights in many directions. Russian nuclear-capable aircraft are thus having a bigger range, notably in the Middle East and the Mediterranean. Also importantly, as the base has been upgraded, Russian air forces can now give some rest to light aircraft, in the past often used for combat operations in Syria. Now Russia can use heavy bombers that are designed for such missions. By enhancing the capabilities of the Hmeymim base for strategic bombers, Russia now presents a threat to NATO’s southern wing. It is to be expected that Russia intensify its often-provocative patrol flights over the Mediterranean Sea and North Africa, as so far it has done in the Black Sea, the Baltic Sea, the Arctic, and near Alaska.