Putin’s Appetite For Rapid Success: If Not Donbas, Then Mariupol

Russian forces are slowly regrouping to double down on their attacks in Ukraine’s Donbas despite heavy losses they had sustained in the country’s north and some personnel shortages. But these issues are unlikely to make Moscow scrap its plan to attack southeastern Ukraine. Faced with a total failure, Russia can only make an effort to seize a portion of Ukrainian territory and then give its go-ahead for ceasefire and talks before the conflict is frozen. 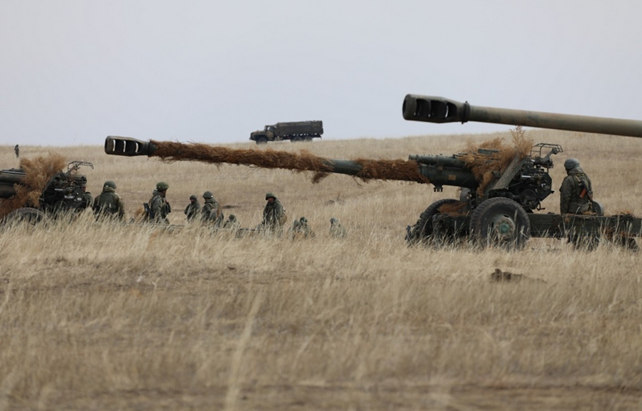 The Kremlin’s failed plan to disband the Ukrainian military, remove Ukrainian authorities from power and impose its conditions made Russian officials rethink their initial strategy. Withdrawing troops from Ukraine’s north and northeast (Zhytomyr, Kyiv, Chernihiv, and Sumy) means that Russia’s top military brass is unable to mass enough forces to start an offensive to break the Ukrainian military group in southeastern Ukraine––the strongest in the whole war theater. It is clear where Russia is going to strike next. Russian forces are likely to advance nearby the town of Izium southwest, towards Sloviansk, and from the south through Volnovakha towards Sloviansk. The third means Russian forces advancing northwards in the Luhansk region. Once successful, Russian forces could seize whole Donbas region of Ukraine and a chunk of the Kharkiv region while cutting off the major Ukrainian troops. But this is unlikely to happen as Russia would not surprise anyone with such a move. Much has been said about that while Russian forces took more time to regroup than initially expected. Ukrainians could therefore brace themselves for a possible assault. It is doubtful whether Russia is capable of concentrating enough troops for that. One obstacle is heroic resistance in Mariupol. But Russia will continue to seize the southern city for many days to come. This is damaging to morale and prevents forces from launching an attack northwards. Perhaps Moscow will deploy chemical, biological, or nuclear weapons to break resistance in Mariupol. Civilians, who are still trapped in the city, now remain hostages. The Kremlin’s minimum goal is to capture Mariupol––the goal that must be accomplished before May 9. In general, Russians are seeking to tighten their grip on a strip of land stretching between Kherson and the mouth of the Dnipro river in the southwest and whole Donbas and southern lands of the Kharkiv region, through the southern chunk of the Zaporizhia region that borders the Sea of Azov. As Russian forces struggle to occupy Donbas, they are also unlikely to seize Kharkiv. Having achieved its goals, Moscow will possibly agree to sign a ceasefire deal to consolidate control of some Ukrainian regions and mass new forces to resume military operations.