Since Donald Trump came to power, Russia has striven for reaching a U.S.-Russian bilateral agreement on the world’s most significant issues in which Moscow seems to hold particular interest. If possible, Kremlin officials would undoubtedly intend to reset bilateral ties between the two countries, marking an Obama-era solution. Vladimir Putin has, however, experienced a series of disappointments, the greatest of which was what had happened in the aftermath of the Helsinki summit. Initially expected to represent a diplomatic breakthrough in bilateral ties with Washington, the July meeting eventually deteriorated relations between the two countries. On the one hand, Putin keeps terrifying the United States with various types of Russian “super weapons” while, on the other, hoping for any signal that could possibly announce warmer ties between the two states, examples of which have been particularly visible over the past few days. 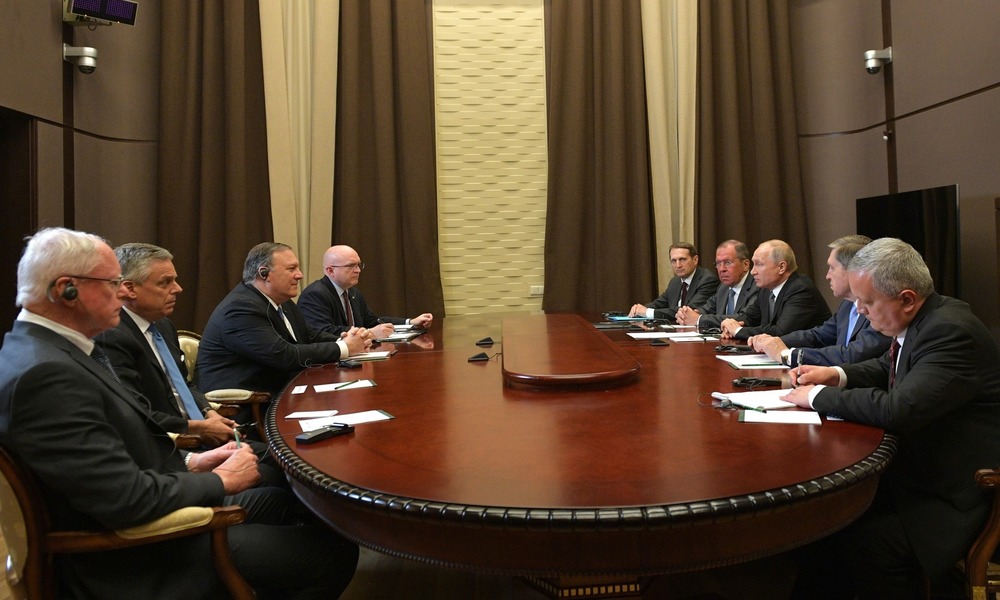 On May 3, Putin and Trump held a telephone conversation while U.S. Secretary of State Mike Pompeo paid a visit to Russia just several days later. While Washington’s reaction can be referred to as much more reserved about further results of the negotiations, Moscow has insisted on the plausible breakthrough in relations with the United States. And yet, the Kremlin’s expectations are doomed to fail due to Moscow and Washington’s divergent interests and too many common conflicts worldwide.

U.S. Secretary of State arrived in Sochi on May 14 for talks with President Vladimir Putin and Foreign Minister Sergei Lavrov. The circumstances of Pompeo’s visit to Russia, including the behavior of the Russian leader along with final remarks made by main participants of the talks, have yet shown Moscow’s considerable efforts made to warm ties with Washington. However, there appeared some elements of Russian provocation. While Pompeo was actually holding talks with Lavrov, Putin, who was en route to Sochi, made a stopover in a military research and development center based in the town of Akhtubinsk. During the inspection, which was broadcast in Russian state television, Putin took a look into military work on developing the hypersonic missile, a modern type of weaponry which the Russian president has boasted about over the past few months to intimidate the West. The Russian leader was two hours late for the meeting with Pompeo. Neither his pit stop in Akhtubinsk nor making the American guest wait for the meeting was as a coincidence, with both events fitting into Russia’s psychological game.

Following Pompeo’s talks with Lavrov and Putin, also attended by Director of the Russian Foreign Intelligence Service Sergey Naryshkin, Moscow and Washington issued different comments on the same meeting. For his part, Putin declared Moscow’s eagerness to restore relations with Washington. Also, he said his May 3 phone call with Trump created the impression that the president intends to “restore Russian-American connections.” A turning point in what Moscow considered a change in Washington’s foreign policy might have been the Mueller report on the Trump-Russia investigation. Lavrov clearly referred to the document, saying that bilateral channels of communication had been frozen “due to a wake of baseless accusations” against Russia “in attempts to influence American elections and certain collusion of high-ranking officials of the incumbent administration.” Putin said that the report had found “the absence of any collusion between the US administration and Russia.” Moscow seems to be aware that Trump will enter into cooperation with the Kremlin as he no longer needs to pursue a sharp anti-Russian policy to show himself in a good light. These hopes may be illusory, though. It was only recently that the FBI director has warned anew about Russia’s continued meddling in American elections. Sitting across from Lavrov and Putin during the Sochi meeting, Mike Pompeo warned them about Russian interference in U.S. elections in 2020.

The agenda of the Sochi summit also included the issues of Venezuela, Iran, Syria, and North Korea. Furthermore, the officials discussed restriction regarding the arms race. Nonetheless, U.S. Secretary of State reiterated Washington’s official standpoint in all these domains, saying at a press conference that the United States would have no intention to recognize the Kremlin’s annexation of Crimea of 2014. As for all critical topics, no breakthrough was achieved, though. No rapprochement has been noticed, either, a situation that is unlikely to change even as a result of the Trump-Putin meeting at the G20 summit in Osaka in June this year. Also, it remains unclear whether the event will finally take place; though Russia said that Trump had held interest in taking part in the meeting, Russian Deputy Prime Minister Sergey Ryabkov admitted that the issue had not yet been formally discussed. According to the best traditions of Russian diplomacy, Moscow has continuously mentioned the theme of the meeting, claiming that Washington should submit a formal request if it is in fact interested in taking part in the summit. But, in fact, it is Putin who plays the role of the client.