This year, on April 4, during the Chinese day of the dead (Qingmingjie (清明节)), national mourning was established in honour of thousands of people who died in the coronavirus pandemic. This was a decision of the State Council of China, the highest executive body in the People’s Republic of China (PRC). 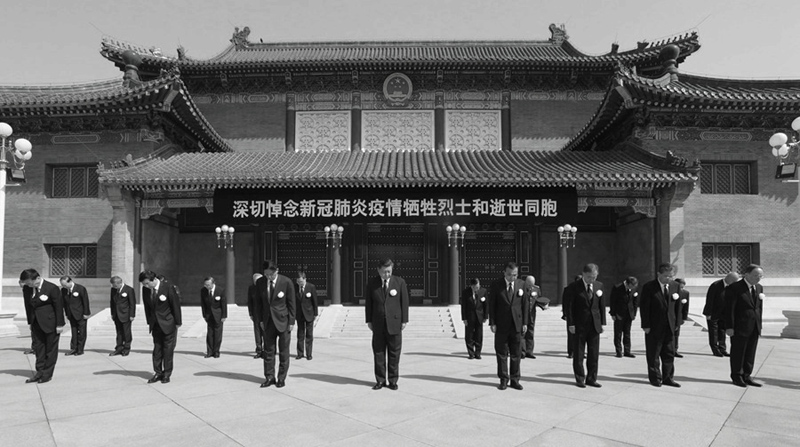 SOURCE: THE STATE COUNCIL THE PEOPLE’S REPUBLIC OF CHINA

At 10.00 a.m. in Beijing in the Zhongnanhai government complex, the deceased were paid homage by the highest-ranking leaders of the Communist Party of China (CPC), headed by President Xi Jinping (Li Keqiang, Li Zhanshu, Wang Yang, Wang Huning, Zhao Leji, Han Zheng and Wang Qishan were also present). They had white flowers attached to their jackets (the white colour is a symbol of mourning in China). A black flag with white signs “we deeply mourn martyrs and compatriots who died because of the COVID-19 outbreak” hung above the door.

The whole country commemorated the victims with three minutes of silence. The sounds of sirens, car horns, trains and ships were also heard and traffic was stopped. The flags of China were lowered to half mast. Many such pictures from Chinese diplomatic outposts around the world were published on pro-government portals. The articles about national mourning are still in grey. Game developers such as Tencet and NetEase, by the decision of the Chinese authorities, have shut down the servers for the day of mourning. Entertainment venues have been closed for the day.

Interestingly, among the materials commemorating the deceased medical staff (at least 46 people), there was a picture of Dr Li Wenliang, who was one of the first people to report the coronavirus problem. At first, he was persecuted by the authorities and then died of the infection, which caused outrage in Chinese society. When the situation became impossible to hide (despite numerous censorship attempts) due to the increasing number of people infected with the coronavirus, the police in Wuhan apologized to Li’s family and some of the officers were punished. The CPC tried to distance itself from this case, but apparently, because of the popularity of the doctor, it was forced to commemorate the deceased.

According to reports of the National Health Commission of China, until April 4, 81,639 confirmed COVID-19 cases on the Chinese continent were reported and 3,326 people died because of the disease. However, unlike most countries, Chinese statistics do not include asymptomatic cases. According to many Western experts, these data are understated and could be estimated to be up to 2-3 times higher.

Despite the media coverage about China’s victory against the coronavirus, there are still limitations and events are being postponed. Due to the threat of the virus in Wuhan, the authorities have banned visits to cemeteries until at least April 30. In other cities, entry into the cemeteries is restricted. Another example is the Gaokao exam, or Chinese baccalaureate. The Ministry of Education announced at the end of March that the exams will be held on 7 and 8 July, one month later than usual. The ministry also suggested that the exams in Beijing and Hubei Province might be postponed to a later date depending on the status of the pandemic. This year, around 11 million students are planning to take the exams.

New cases of the disease are still appearing. Chinese institutions and the media report that the vast majority of the infected are people returning to China from other countries. For example, on Monday, April 5, 39 new cases were confirmed, 38 of which did not come directly from China. This is to show that the threat in China itself is small, but it may come from other countries that are not coping with the pandemic. In the case of the second wave of the disease, it will probably be rhetoric used by the CPC.