The speakers who took part in this event were: Jan Hernik, editor-in-chief in Warsaw Institute and Finn – Ole Albers associated fellow at the Warsaw Institute. Finn – Ole Albers have written a report about military capabilities among Antarctic climate states. He mentioned the numbers of transport planes, tanker ships, destroyers that he used in his comparison. It is important which weapon system could be engaged in Antarctica. Finn – Ole Albers In his work used global firepower index and available database from 2015-2022 as his source of information. Machines from sea and air are essential for this report. Tactics, technology ,and firepower of single weapon systems as well reconnaissance capabilities gave Finn a broad view on a states’ position in the region. He measured, which country has the biggest chance in conquering Antarctica with their military resources. 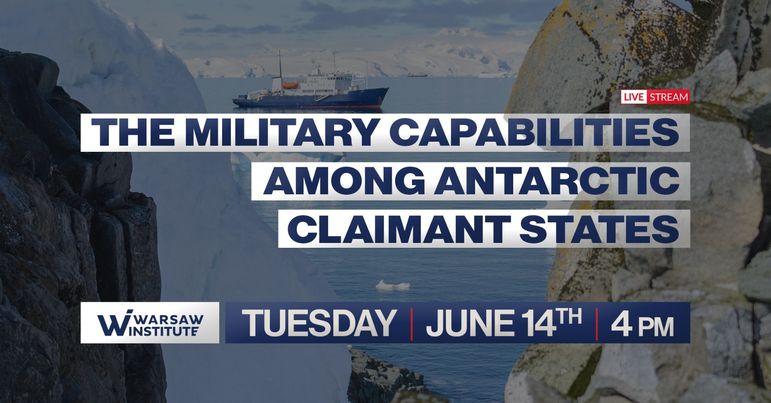 The entry of the event started with the current political situation in Antarctica region. Ole Albers mentioned, that the document from 1959 (signed by seven states: USA, France, UK, Norway, Argentina, Chile, New Zealand and Australia) bans any military maneuvers in the area. On the other hand, scientific expeditions are legal. However, any exploration of resources (there was a newly discovered coal in Antarctic mountains) is not allowed.

As for capabilities of particular states: UK, France and Australia have the greatest number of weapon systems that would help them in achieving their goals because these systems can reach Antarctic coastline. There are states with limited capabilities like Argentina and New Zealand. Worth mentioning is that Argentina does not have 3 submarines anymore, which were on the equipment of their army. New Zealand has no fighter aircraft. As for Norway, they do not own any overseas territories. Norway claims for Antarctic coastline could be a difficulty in accomplishing any goals in the region. Oslo can only engage in replenishment operations (in buying new machines). UK and France have overseas territories closer to the Antarctica than Norway and have military bases in the region. British Falkland Islands are 1. 3 thousand km far from Antarctica. French New Caledonia is on Pacific Ocean and is 5 thousand kilometers far from Antarctica. Jan Hernik mentioned, that China is expanding their influence in Pacific and Indian Ocean region. The newest Solomon Islands and their treaty with China could help Beijing in conquering the land of Antarctica. China could create a military base there, but still it’s a big distance to the main island. Finn – Ole Albers thinks that, It will bring Chinese navy even closer to the southern continent because it’s a chance to increase their naval presence in the waters in southern Pacific.

The modern geopolitical situation, and the one before the treaty from 1959, has not changed as much. There are still territorial claims from UK, Argentina and Chile for the same territory. Other states like US, Russia, and China didn’t make any claims before the treaty, so only a small part of the land left in Antarctic region that wasn’t claimed by any state. When China, Russia, and USA will appear with their military presence in the region of Antarctica, there can be a conflict initiated by these three states and the rest of the countries could join in the quarrel. There might be an alliance, created for these purposes, in order to divide the land by force.

As for summary, the strategic value of small islands in Pacific and Indian Ocean will rise. Finn pointed out that South African and French islands are still not inhabited. They might be used as military base in the future. As for the conflict in the past between Argentina and UK, it is still relevant. The Falkland Islands are the key to for Great Britain to achieve their goals in Antarctica.