On 03.10.2019, The Warsaw Institute Review (WIR) hosted the second event in the series “Spotkania z Geopolityką”, which translates to “Meeting with Geopolitics”, with the theme of “USA – EU – Russia Geopolitical Update”. 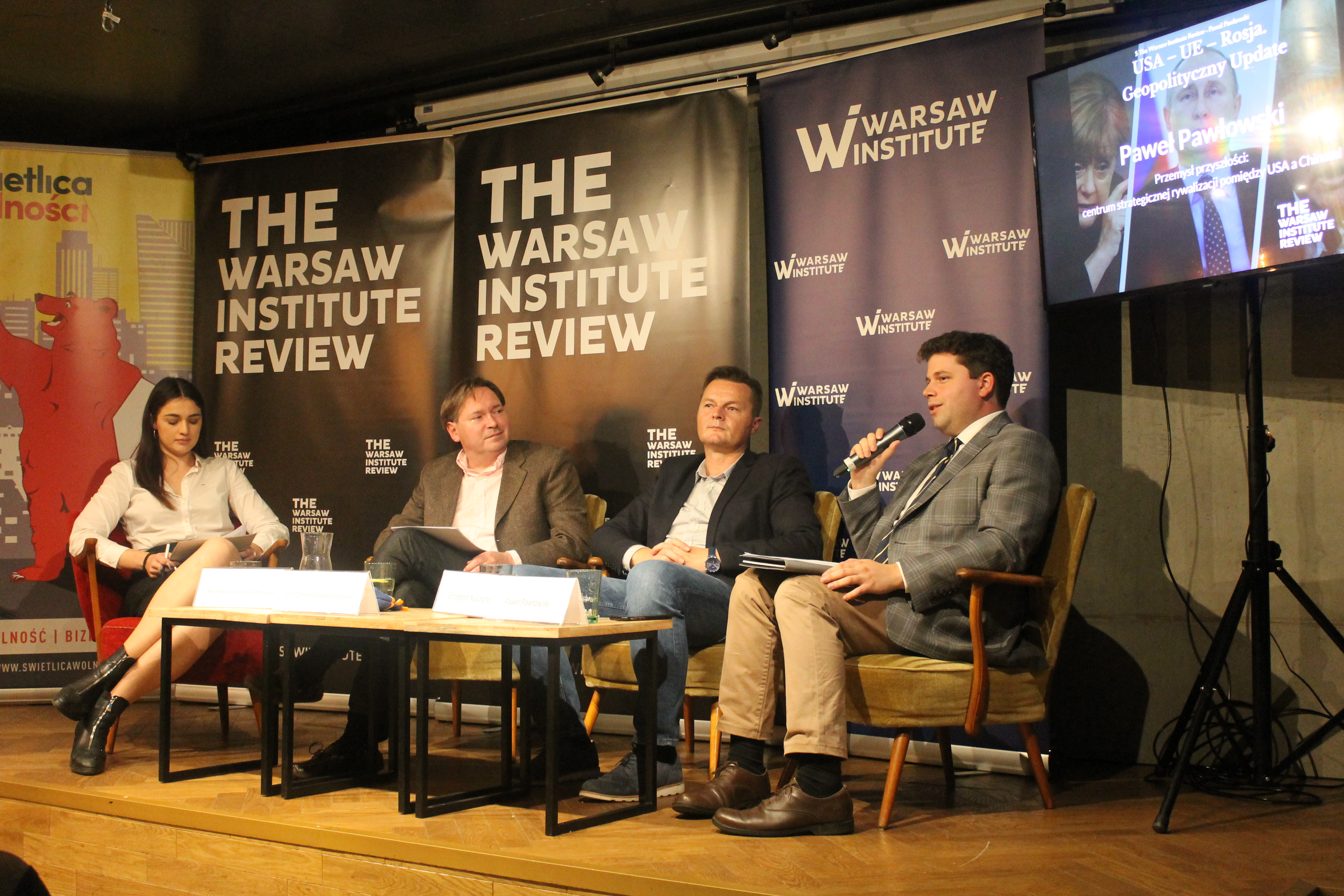 The public event, having taken place at Świetlica Wolności in Warsaw, Poland, for this round similarly featured an expert debate with distinct specialisations on developments pertinent to the geopolitical dynamics of the world, with attention to how Poland finds, or may wish to find, her place on this chessboard.

It aptly follows the first of ‘Spotkania z Geopolityką’ events, which pertained to post-electoral changes in context of EU member states, including the one soon-to-be ex-member state. 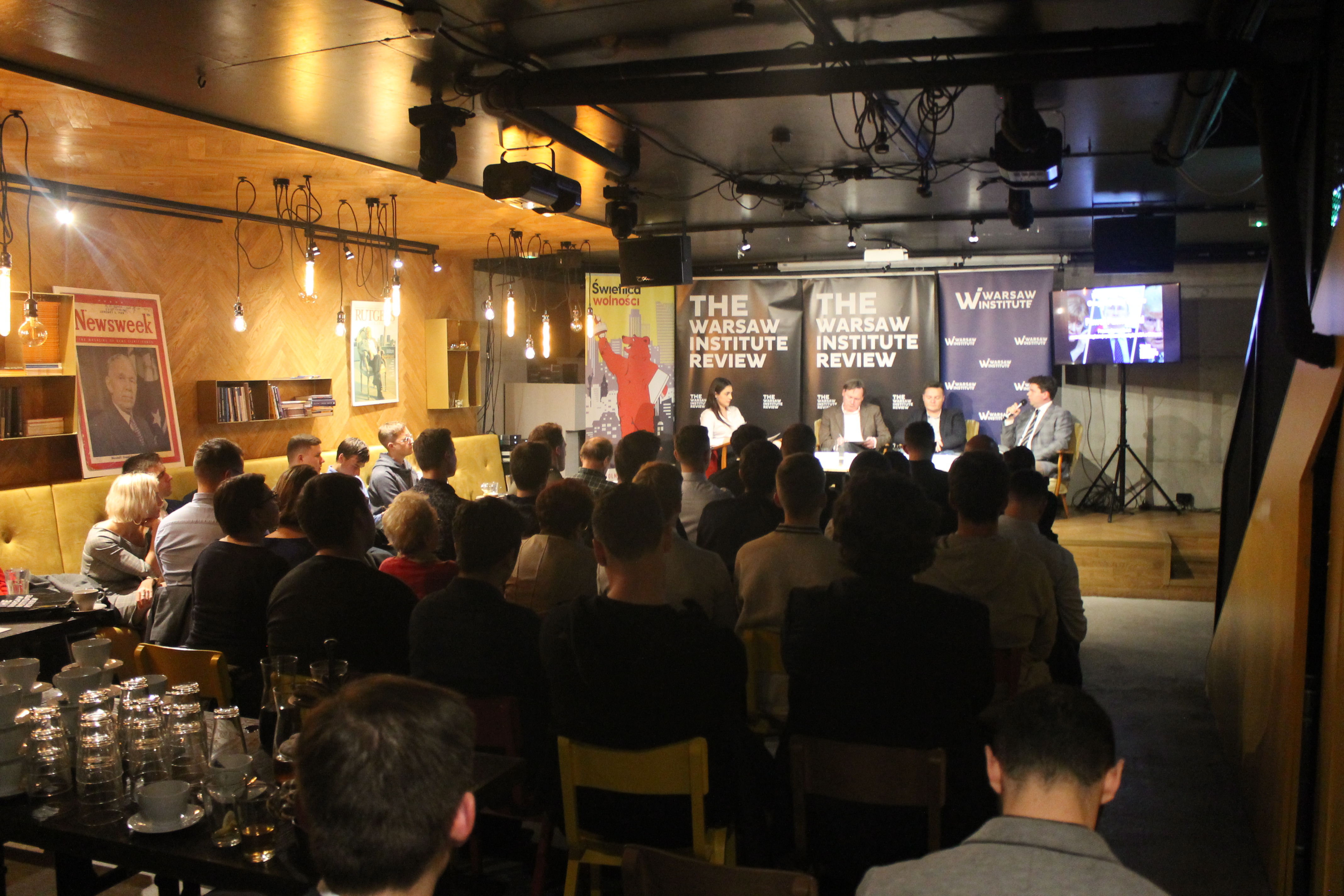 As the entirety of the room had filled up, the WIR Editorial Secretary, Ms. Berenika Grabowska, who moderated the session, welcomed the audience, and introduced the panellists: Prof. Tomasz Grosse, Mr. Grzegorz Kuczyński, and Mr. Paweł Pawłowski.

The format of this session entailed in the first stage a roughly 15 minute lecture-style address to the audience from each of the panellist speakers regarding a specific topic.

Prof. Tomasz Grosse opened with an elaborate explanation on the ‘dilemmas the EU is facing in regard to a changing world’.

He underlined, amongst others, that it is conceivable that at the end of the day, Brexit will occur sooner or later, and it will be definite. Albeit, regardless of when it occurs, it will do so in a manner which is uncomfortably chaotic. Quite likely, this would mean at first a Brexit without an agreement. Upon realising the adverse effects this causes and could potentially cause, both the EU and the UK could return to the negotiating table and finally devise a Brexit with an agreement framework, which in essence would just be a description of the changed state of affairs, and in that, a formalisation of them. It would be rational to think that the UKs return to the negotiating table with the EU would be weakened further should this scenario unfold. 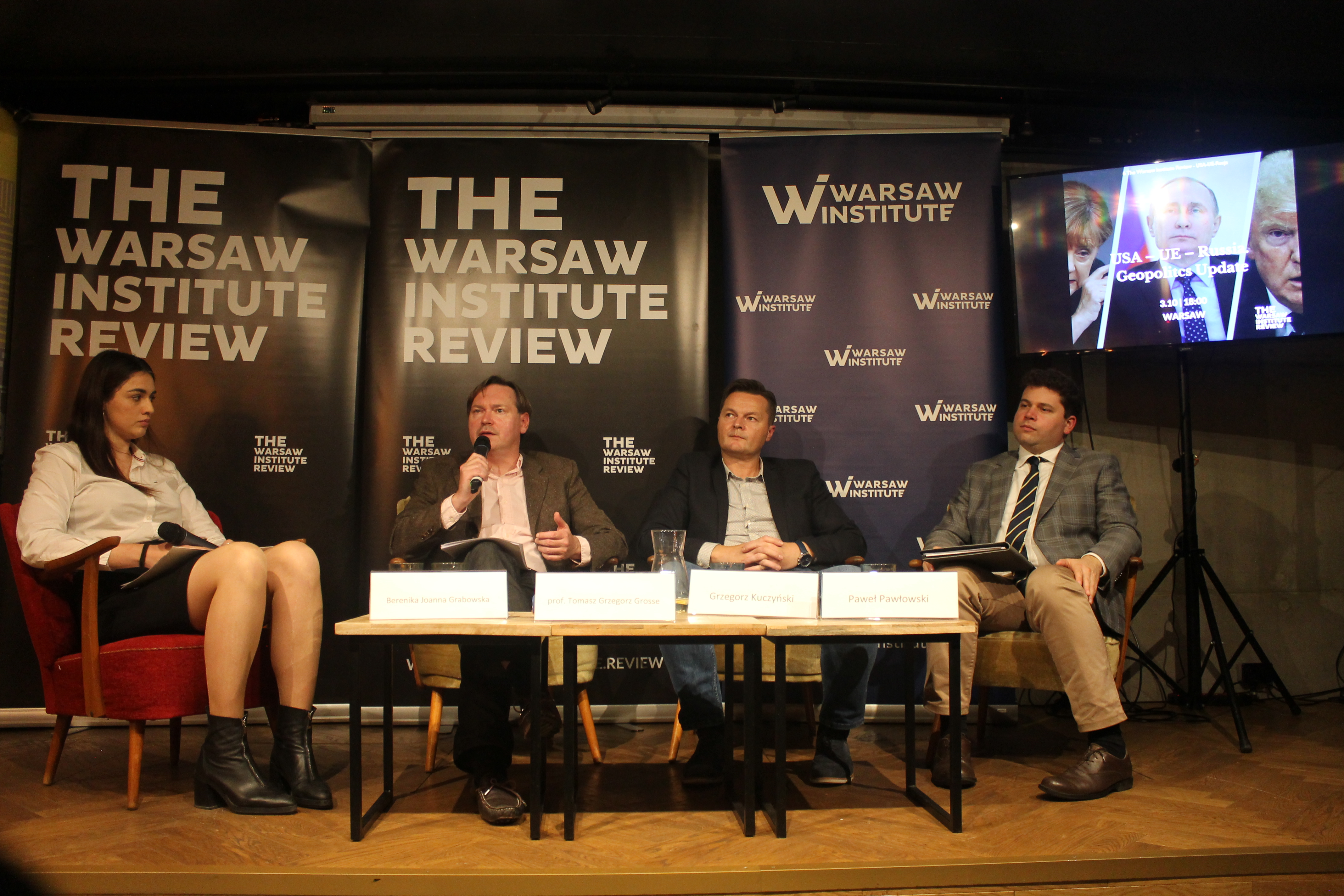 Following this, Mr. Grzegorz Kuczyński opened his delivery with a banger, translated roughly as something along the lines of the following:

“As can be reflected in a way in Russian literature ‘War and Peace’, one would wonder whether the actions of Russia can be perceived or interpreted as an intent for peace or for war. I believe that Putin wants peace, albeit he wants it too much, and unbendingly on his conditions, to the extent that he is likely to be willing to go to war for it”. 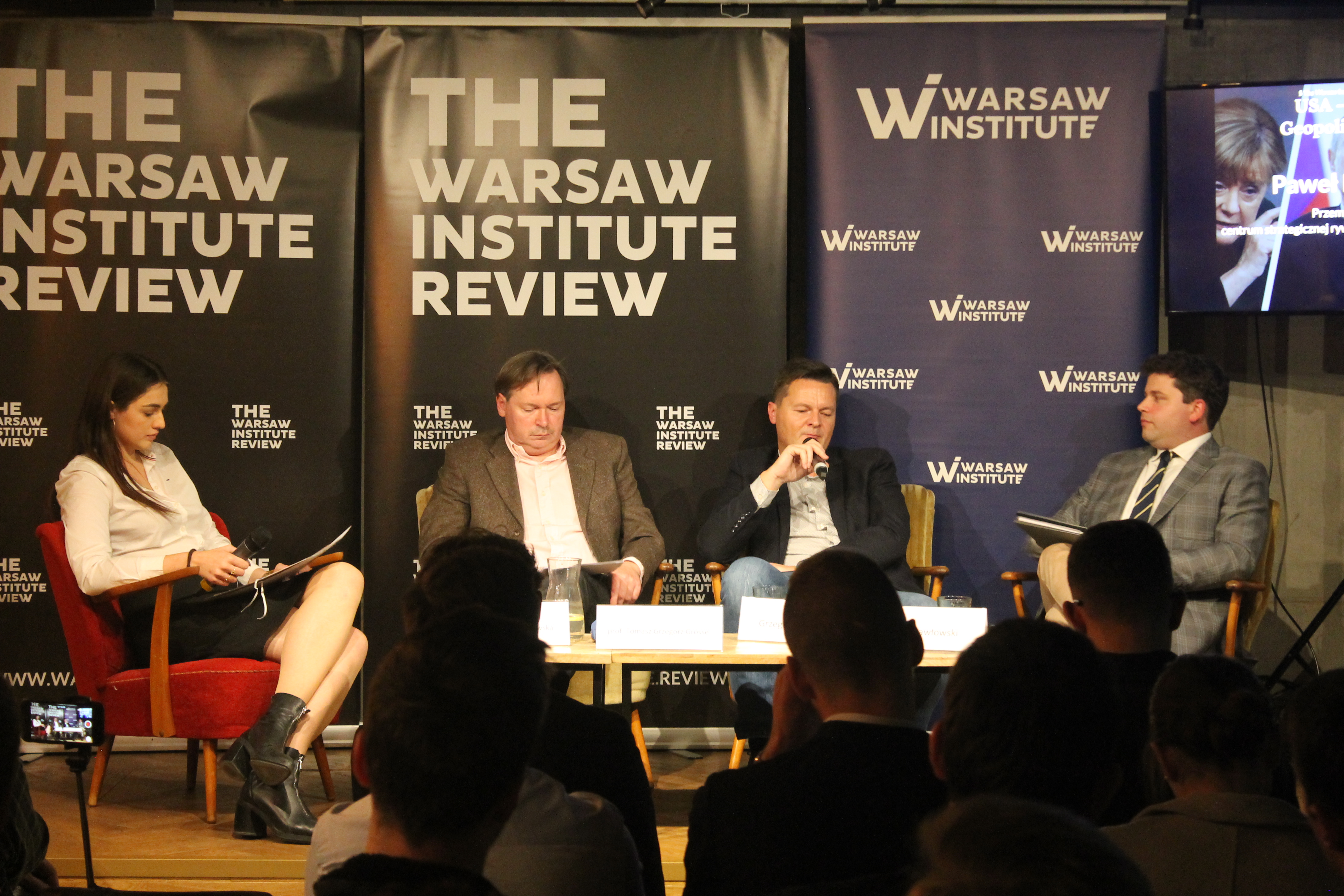 Thus, the topic of discussion, ‘rest or arms race? Russia’s policy towards the US and the EU’, which followed his memorable opening, entailed a change in attitude from the side of Russia, “putting down the carrot, and picking up the stick”.

Bringing the attention of the audience to Ukraine as a frontier for the geopolitical contentions, particularly as it borders both Russia and the EU, Mr. Grzegorz Kuczyński noted how it is difficult to perceive that the peace process for the War in Donbas can take steps further without excessive concessions from the side of Ukraine to the side of Russia. This is reflected in the recent attempts and building relations via the recent exchange of prisoners, yet with an indefinitely rescheduled Normandy format meeting, essentially puts Ukraine back in square one. Furthermore, indications of an exceeding business-like approach from the incumbent US administration could render Ukraine unhealthily reliant on France and Germany for steps in this direction.

Consider, Russia’s foreign policy here is effective, as it was Zelensky’s promise to end the war in Eastern Ukraine as one of the key campaign elements but also an unfortunate result of political inexperience, which, albeit, can be overcome. Returning to the negotiating table, one ought to consider also the energy factor, and Ukraine as a transit country, as an element which adds to the equation. With savvy diplomatic footwork, this can be pursued. However, Russia, has a long continuity in its foreign policy, reflected in the lack of change in power, and is willing to wait out its opponents and mitigatable negative effects, as displayed since its actions in both 2008 and 2014. 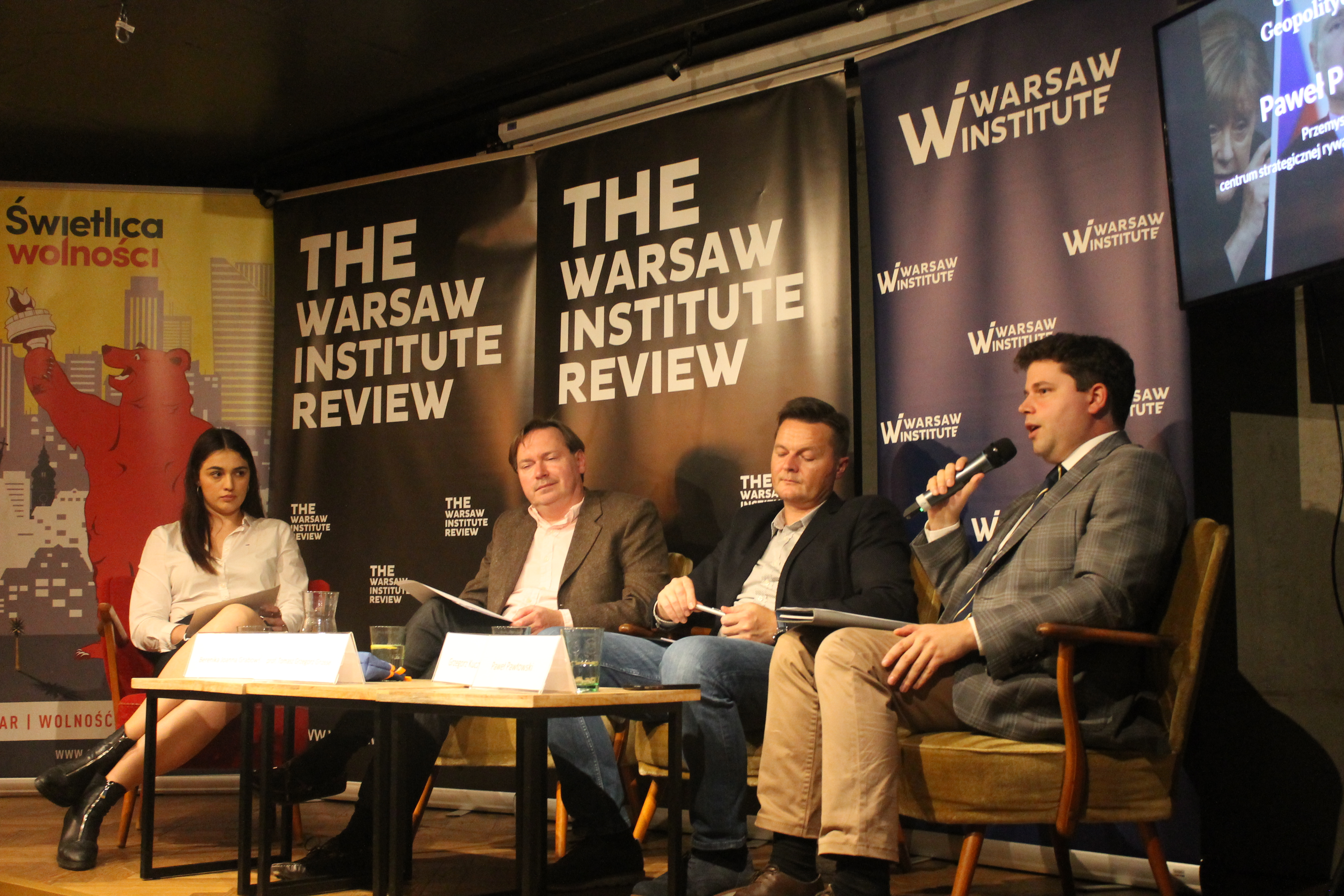 The third and final speaker, Mr. Paweł Pawłowski, had a slightly different tone when approaching his topic, with hints of tasteful and well-placed humour whilst maintaining an acute professionalism. This aptly suited his topic ‘the industry of the future: the centre of strategic rivalry between the US and China’.

It is a generally agreed upon concept that having an advantage in technology will give a side an edge over its opponent in the geopolitical chessboard of the world. Yet, the ways in which this is exhibited is astoundingly complex and with a wide variety of possibilities, as Mr. Paweł Pawłowski illuminated for the audience with his coherent explanations and diplomatically-savvy commentary.

To give perspective of races in advancement of technology, Mr. Paweł Pawłowski put it this way with reference of what we can learn from the experiences of the Cold War, which could be roughly translated as the following:

“Though the USSR had indeed put Laika, the dog, into space, and then Yuri Gargarin, the first man ever in space, at the end of the day, the first language to be spoken on the moon is English”

And American English at that.

Note: Australian satellites were instrumental in the video recordings of the moon landing, partly due to its technological capabilities, its geographic position, as well as, notably a rational, strategic alliance and good relations between the US and Australia. 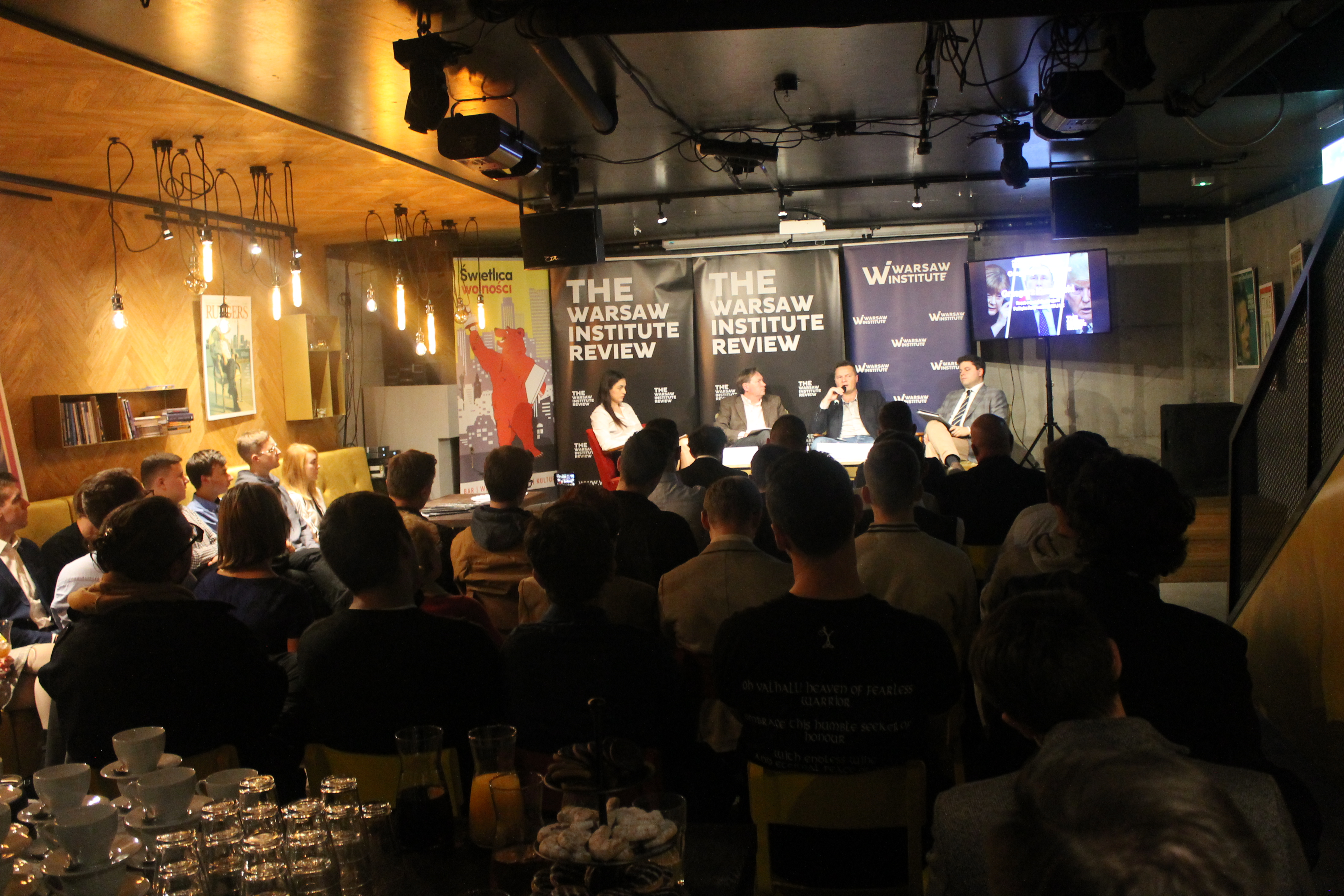 It is worth noting here, Mr. Paweł Pawłowski was also the WIR affiliated expert who gave crucial input to the ‘Strategy Duologue’ meeting with the Embassy of Australia.

Then, Ms. Berenika Grabowska, the moderator asked a series of questions for each of the panellists.

The audience had an opportunity to engage with the panellists in discussion and ask questions, of which several were quick to do so. The question and answer session filled up right up until the end of the session.

After which, the guests, panellists, and other organisers, including Mr. Łukasz Biernacki, WIR Communications Specialist, and Mr. Alexander Wielgos, WIR Advisor, could treat themselves to the local’s catering with networking and informal chit chat.

We invite you to take part in the next initiatives of The Warsaw Institute Review quarterly, listen to the podcast, and see the photos from the debate.