Joe Biden’s first decision after moving into the White House was reversing president Trump’s decision to withdraw from the Paris Agreement. This might have signalled a new break in the importance of climate policy—but did it really? In order to convince the world to trust his newfound focus on climate policy, President Biden will have to act on his promises with bold decision in the near future. 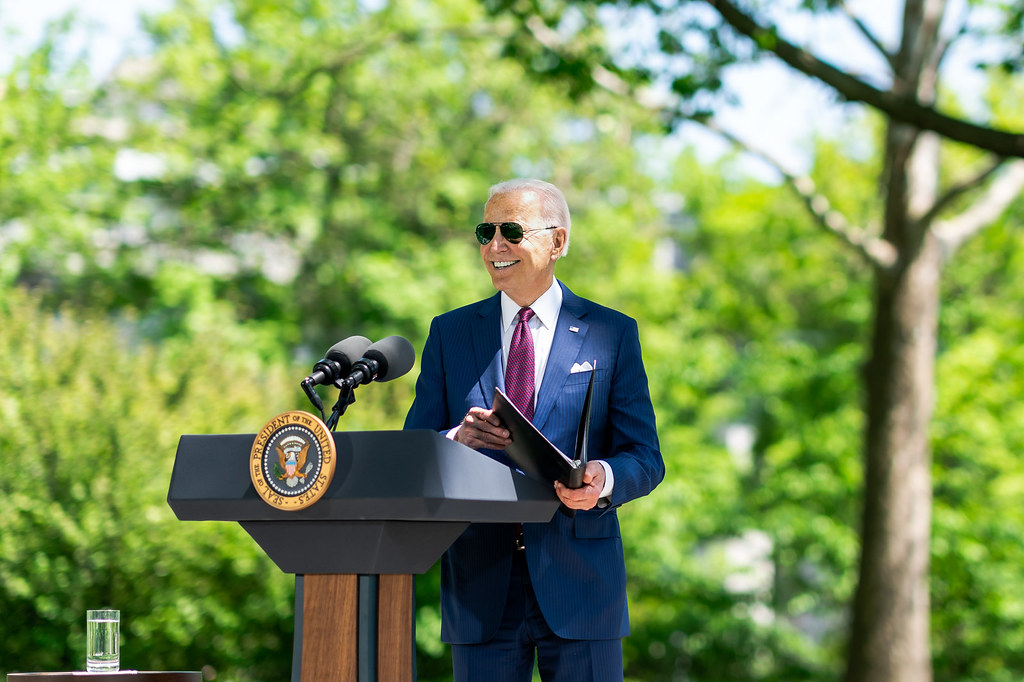 In his address to the US Congress on 28th April 2021, Joe Biden signified the integral role climate policy is to play during his administration. “For too long, we have failed to use the most important word when it comes to meeting the climate crisis. Jobs. Jobs. For me, when I think about climate change, I think jobs” he commented. This ambitious move towards a transformation of the energy and transport sector goes in tandem with Mr. Biden’s achievements during the first one hundred days in office: as his first act as President, he re-entered the United States into the Paris Agreement, a 2016-signed initiative aiming to reduce the rise of carbon emissions to below 2 degrees above pre-industrial levels.

Donald Trump’s administration, characterized by climate scepticism and a lack of reform towards more sustainable practices, saw a withdrawal of the country from the Accord in 2017, arguing that it had a detrimental effect on the development of the American economy. Mr. Biden’s address suggests that, while he shares Mr. Trump’s wish to create workplaces and expand the economy, he wishes to do so through a transit towards more sustainable energy sources, and the creation of more environmentally-friendly means of transportation. This is evident in his infrastructure proposal, totalling to $2 trillion, unveiled in March.

This unprecedented emphasis on the struggle against climate change might foreshadow the emergence of the United States as the leaders of an international cooperation to reach the goals laid out in the Paris Agreement. With the upcoming COP26 event in Glasgow, taking place between 1st and 12th November 2021, the topic of Nationally Declared Commitments (or NDCs for short), comes up again in the international debate, and many supporters of the reform look towards Biden as the leading figure of the talks.

This hope is amplified by the ambiguous success of the Agreement today; while all Parties continue to issue NDCs for every stage of reform planned in the Accord, some states are very intermittent in their adherence to the aims: this concerns countries such as China, United States, and Australia. This is especially worrying considering the fact that the first two states contributed towards more than 45% of the world’s total CO2 emissions in 2018. President Xi Jinping has always been reluctant to make pledges regarding China’s NDCs. However, in light of Mr. Biden’s reformed stance, he accepted the president’s invitation to the Leaders’ Summit on Climate Change on April 22, where he stressed the importance of harmonious cooperation and international struggle for green development. These words, addressed to 38 other leaders of countries party to the Paris Agreement, may signal a thaw in international commitment to the aims set out in the Accord.

This seemingly optimistic outlook, triggered by Biden’s reformatory stance, does not, however, go without criticism. At her congressional hearing in April, Greta Thunberg, a climate activist and the creator of the Youth Climate Strike, was very sceptical towards Mr. Biden’s climate ambitions. “I don’t believe for a second that you can actually do this” she commented. “How long do you honestly believe that people in power like you will get away with it? How long do you think you can continue to ignore the climate crisis, the global aspect of equity and historic emissions, without being accountable?”

Similar voices of scepticism arose from within the Congress. Although many Representatives assess the plan as a step in the right direction and applaud its focus on the introduction of more sustainable measures, some groups bemoan the scale of the plan’s expenditure, most notably from the progressive faction of the Democratic Party. “The size of it is disappointing. It’s not enough” – commented  Alexandria Ocasio-Cortez, Representative for New York’s 14th Congressional District. Varshini Prakash, the executive director of the Sunrise Movement, also found the plan’s expenditure to be far too little to initiate meaningful change.

The criticism of the Paris Agreement, both during its inception in 2016 and in the course of its development, echoes the grievances towards Biden’s plan. Though it revolutionized the area of international cooperation against climate change with its legally binding targets, NDCs of the biggest polluters were set at levels which fail to meet the general aim of the Agreement. Unambitious NDCs is exactly what severely limits the impact of the Accord, and makes climate activists, such as the aforementioned Greta Thunberg, sceptical of the scheme. A similarly controversial approach, seen in other efforts of the United Nations Framework Convention on Climate Change (UNFCCC for short), such as in the 1997-signed Kyoto Protocol, could be attributed to a lack of steadfast leadership among the signatories.

The US’s role as the leader of international cooperation on climate change has always been connected to domestic politics; the Kyoto Protocol was signed by the Democratic Bill Clinton, but his successor, George Bush, did not ratify the decision, limiting its impact. Similarly, ambitious prospects connected to the signing of the Paris Agreement by the Obama administrations were quickly confounded by Donald Trump’s withdrawal from the Accord in the subsequent year. However, never before has climate reform been so high on presidential agenda, and no other president before has underlined the importance of a movement towards a more sustainable future in such a pronounced way.

Therefore, will Joe Biden assume a leading role among nations party to the Paris Agreement and the UNFCCC? His invitation of representatives of 40 countries to the Leaders’ Summit on Climate Change, and his efforts to re-enter the United States into the Accord may suggest that Mr. Biden’s international influence may put pressure on the biggest polluters of the world to undertake more ambitious NDCs and enter other international schemes, aimed at reducing the world’s carbon footprint. Realizing that reforming the United States’ economy is necessary in order to exert this pressure, Mr. Biden’s plan is the country’s biggest expenditure towards sustainable infrastructure in history.

Mr. Biden’s address to the Congress symbolizes the efforts he undertook towards a fight with climate change in the first one hundred days of his presidency. He has made ambitious plans and bold claims of combining sustainability with a higher amount of Americans in the workforce. But voices of criticism from more reformatory factions mean that in order to convince the Congress, and the entire world, of the importance of struggle against climate change, he will have to act on these plans in the near future.