As part of the Astana Process Summit, a three-country meeting on Syria took place. The Turkish, Russian and Iranian sides held talks in the bilateral and trilateral formats and discussed key issues. Iran and Syria turned out to be the biggest winners of meetings at the level of heads of state. Due to the steps taken to end the civil war in Syria, military intervention in Syria was not allowed. Iran has entered into new business relations with Russia that will allow the development of their energy infrastructure. An unofficial alliance was formed between the two countries. 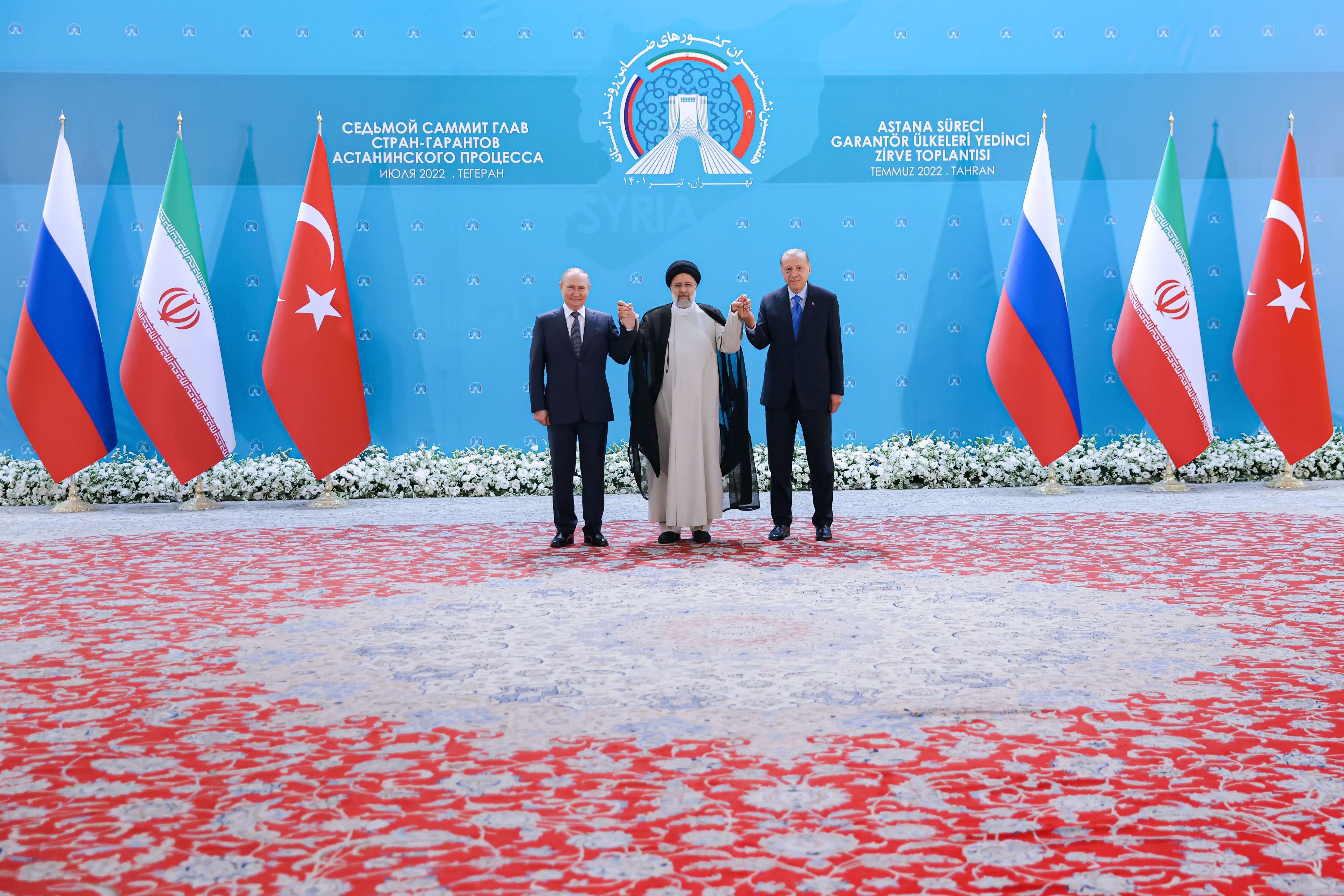 The talks of the Supreme Leader of Iran, Ayatollah Ali Khamenei, with the Russian President concerned the strategic aspects of Russian-Iranian relations. Both sides expressed support for the partnership to ensure stability in the region. Bilateral commitment to maintaining bilateral relations was confirmed, and the Iranian leader reassured Vladimir Putin that it was not Russia that started the war in Ukraine, but NATO, which was a “dangerous creature” that threatens international security.

Vladimir Putin’s conversation with Iranian President Ra’isi concerned the expansion of bilateral political and business relations. Russia will implement joint projects with Iran, more actively using the national currency in direct financial settlements. During the meeting, the issue of cooperation in the field of industry, transport and energy was also discussed. National Iranian Oil Company and Russian Gazprom have signed an agreement on strategic cooperation on projects worth around $ 40 billion. Bilateral scientific and technical cooperation will be undertaken, which is to enable Iran to enter the liquefied natural gas market. The deal includes the construction of export pipelines, the development of six oil and two gas fields (in the Kish, North and South Pars regions), and the completion of the Iran LNG export terminal. In the past, the United States has warned the Kremlin authorities about the consequences of expanding Iran’s gas infrastructure. However, due to the fact that the West has imposed sanctions on the Russian economy, the ruling party in Moscow intensified their cooperation with Tehran, disregarding the suggestions of the democratic states.

The Russian authorities want to maintain their participation in the verification of Iran’s compliance with the agreement (JCPOA) on the 2015 nuclear program under the Iran, P5 + 1 format. Russian representatives in the IAEA organization worked to monitor Iranian attempts to use medium-range ballistic missiles, hence the Russian side believes that these missiles were not armed with nuclear warheads and were tested for purposes other than proliferation of weapons of mass destruction. Vladimir Putin decided that the interrupted consultations should be resumed, from which the American side abandoned in 2018 – during the presidency of Donald Trump. They should be based on compliance with United Nations Security Council Resolution 2231 of 2015. Every political and diplomatic effort should be made to tackle the problem of Iran’s offensive nuclear weapons. Tehran should be allowed to develop its own nuclear technology solely for peaceful purposes, therefore consultations should be resumed. During the meeting at the Astana summit, the Russian president stated that in the international system, every state has the right to develop on the basis of respect for international law and without discrimination on the part of the international environment, therefore sanctions against Iran should be eased.

At the 2018 meeting in Sochi, a new subsidiary body in the Syrian political system based in Geneva was officially implemented as part of the Syrian National Dialogue Congress. The efforts of the UN envoy for Syria, Geir O. Pedersen, led to the creation of a Syrian constitutional assembly (at the United Nations). It aims to create a new Syrian constitution and introduce systemic reforms along the lines of the rule of law. This institution works in cooperation with both the Syrian authorities and the opposition, which is in line with the assumptions of the international documents promoted by the United Nations in 2012 on the political dialogue of the conflicting parties (i.e. UN Security Council resolutions 2042, 2043, including the “Geneva Communiqué “). No representative of another country may be present when important decisions concerning Syria are taken in the constitutional assembly. Only the representatives of the United Nations are admitted to the session, apart from Syrians. The Syrian people themselves should decide to respect their sovereignty, cultural, religious and racial diversity in the territory of the Syrian Republic. The new constitution will be acceptable only after obtaining the consensus of the entire Syrian political scene. The next session will be held on July 25-29, 2022. As Vladimir Putin emphasized at the conference following the meeting with Ra’isi and Erdoğan on July 20, the assembly was founded on the initiative of Russia, Turkey and Iran. Russia and its partners will cooperate with the UN envoy for Syria and the constitutional assembly, but the Astana format is to play the most important role in the Syrian dialogue. The Russian president announced that his state, along with two other partners of the format, would support the Syrian government in neutralizing militias operating in Syria, supported by states pursuing their geopolitical goals in the region. President Putin did not say it outright, but the later position on the United States suggests that it is American forces in Syria.

According to the agreement signed on Wednesday between the leaders of Turkey, Russia and Iran on Syria, the situation of the Syrian society is improving, mainly thanks to the humanitarian activity of Astana-format countries, UN missions and the activity of other humanitarian organizations. The most important role in the implementation of the assumptions of international documents, i.e. the political and systemic transformation of Syria, is played by Russia and Iran, which support the “free elections” (from UN Security Council Resolution 2254 of 2015) to the Syrian president and their ally, Bashar Al -Asada. A common position towards Syria’s Idlib, ie the need to stabilize this area, is a priority for countries of the Astana format. Therefore, Turks can afford to talk to partners from the Astana format about their own interests in the region.

However, partners from Moscow and Tehran are negative about Turkey’s plans. In early July 2022, the Iranian Minister of Foreign Affairs visited Damascus, where he argued that the implementation of Turkish interests in a country that has been subject to civil war for 11 years is a threat to security in the region and Syria’s territorial sovereignty. Iran’s Supreme Leader, Khamenei, sees Turkish aggression plans as pointless and harmful to the stability of the region – Ankara will not achieve the expected results, it will only strengthen the terrorist forces and fail to put political pressure on the rulers in Damascus. On the other hand, the Turks managed to convince their partners from the Astana format to end US-Kurdish cooperation. Ankara and Tehran oppose US cooperation with the YPG / PKK in Northeast Syria. They demand the withdrawal of US forces from the Eastern Euphrates as part of the process of promoting peace in the region through the Astana format. This decision was made by the members of the Astana Process Summit on July 20, 2022, agreeing with the position of President Erdoğan. He accuses the Americans of supporting the Kurds of the YPG under the pretext of fighting ISIS / DAESH. Turkish troops defend their border and protect civilians from “terrorist” units. According to the position taken by the heads of the three states, all Syrian territory should be under the control of the democratically elected Syrian government. According to the Iranian side, the death of general Qasem Soleimani is a symbol of resistance, struggle and opposition to terrorism. Each of the states participating in the Astana Summit recognized the fight against terrorism as a key aspect of the trilateral cooperation of the three states. Currently, the most important place in the fight against terrorism for the members of the agreement is Idlib and it is necessary to take action in this area (not necessarily according to Turkish plans). In addition, the Russians recognize the government in Kiev as terrorists, the Iranians, the Arab militias in Iraq and Syria, as extremists using violence with a political purpose, and the Kurdish Turks from the YPG / PKK as terrorist groups threatening the security of the region.

Iran’s supreme leader made it clear that the Americans should not get involved in stabilizing the situation in the region. Each of the three countries perceives the presence of the United States as a threat to their own interests. Article 12 of the agreement of 19 July 2022 devoted to Israel (the US ally in the region) condemns the activities of Jerusalem in Syria (including attacks on civilian infrastructure) and recognizes the legitimacy of UN Security Council Resolutions 242 and 497 rejecting Israel’s occupation of the Syrian Golan. The Turkish president, in turn, is currently fighting for the votes of the voters. Despite Erdoğan’s image success in the international arena (Turkey became a mediator in the Ukrainian-Russian conflict over Ukrainian grain), the signing of a tripartite memorandum between Sweden, Turkey and Finland on the activities of the YPG / PKK and talks at the summit of heads of state under the Astana format may not be enough to increase Recep Tayip Erdoğan’s chances of victory in the next elections to be held in 2023. Russia is gathering allies in its fight against the West to be able to co-create the anti-Western front, the front of the sanctioned countries. It is one of the countries negatively perceived by human rights violations on its territory and beyond. The Iranian-Russian agreement on political and economic cooperation and continued support for the rule of Bashar Al-Assad is a signal to the West and authoritarian states that the Russians support their partners in business. The Americans can be seen as unreliable allies in the context of leaving Afghanistan and withdrawing from Syria in the past, as well as reducing support for Kurdish fighters. Both the activities of the Syrian government forces and Turkish political games on several fronts may destabilize a region that has been in decline since the US involvement in 1991.