On Monday, August 1, a historic event took place in Polish-Australian relations. The Governor General of Australia came to Warsaw for the first time with an official delegation. During his visit, David Hurley met, among others, with Prime Minister Mateusz Morawiecki, President Andrzej Duda and the Speakers of the Sejm and Senate. 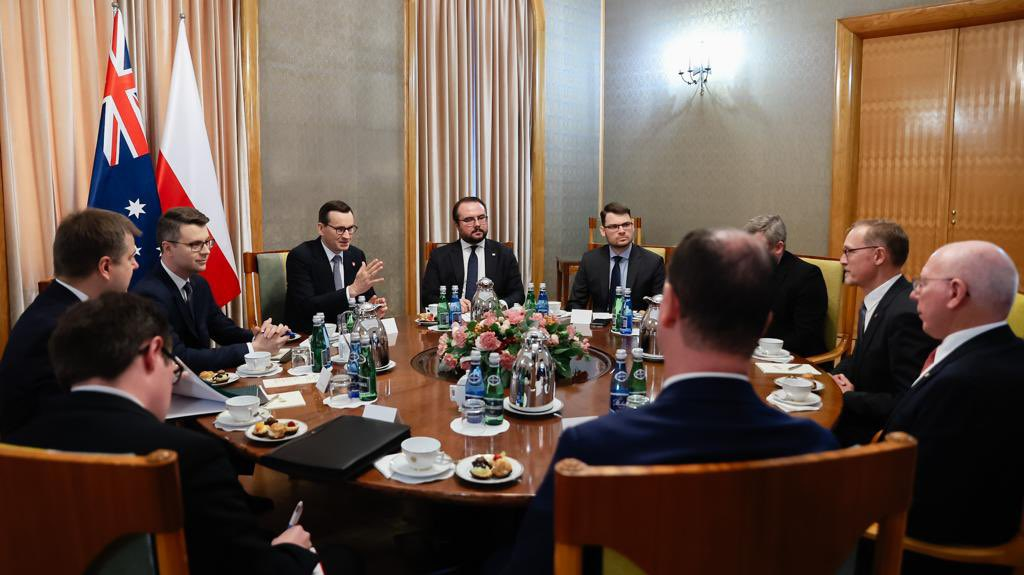 Polish-Australian relations were officially established on February 20, 1972. The visit of the Governor General of Australia was therefore symbolic, because in 2022 the 50th anniversary of establishing relations between these countries is celebrated. During his stay in Poland, Hon. David Hurley emphasized the ties between Poland and Australia, referring to the most glorious examples of cooperation between these nations. During the press conference in Belweder Palace, the Governor mentioned the events of the Second World War. The Poles fought side by side with the Australians in the Battle of Tobruk in 1941, and during the Warsaw Uprising in 1944, many Australian airmen supported the fighting inhabitants of Warsaw.

The Governor General of Australia also emphasized the presence of the Polish minority in Australia. It was this country that became home to many Poles fleeing World War II, including the survivors of the Holocaust. Also in later history, Polish citizens fled to Australia at a time when the martial law was introduced in Poland in 1981-1983. The Australian Polonia currently amounts to just over 200,000 people, most of whom were born there with Polish roots. However, this does not prevent them from cultivating the Polish tradition in numerous cultural centers.

The purpose of Hurley’s visit was to discuss a number of issues related to the war in Ukraine, Poland’s energy security and to outline the situation that is constantly developing in the Indo-Pacific region. The governor raised these issues with all the politicians he had the opportunity to meet during his visit to Poland.

It is worth pointing out that Poland is a developing market for Australia. In 2019, Australia’s trade in goods and services with Poland was valued at nearly USD 2.0 billion, dominated by imports of goods from Poland. The total import of goods from Poland to Australia was valued at USD 1.2 billion, while the export of goods from Australia to Poland amounted to USD 578 million. Australia’s main exports were coal, other ores and concentrates.[1] The share of Australian coal in the Polish energy sector is growing year by year. In 2020, slightly over a million tons were imported to Poland, and in 2021 this number doubled (two million tons).[2] It can be expected that Poland, in the face of the deepening energy crisis, will further increase the import of Australian raw material.

During his visit, the Governor General of Australia also expressed his appreciation to the Poles who had admitted millions of war refugees from Ukraine to their country. Hurley also pointed out that the COVID-19 vaccines given to Australia by Poland have saved the lives of many of his compatriots. The joint actions of Poland and Australia in opposition to the aggression of the Russian Federation against Ukraine further strengthened the relations of the two countries, which are important pillars of financial and military support for the fighting Ukrainians.

The intensification of relations on the Warsaw-Canberra line is a valuable sign that significantly raises Poland’s rank in the international arena. Poland’s increasingly better relations with Australia are a clear signal that the government in Warsaw stands for the values of the Free World, also in view of the growing tension between the United States and the People’s Republic of China. The visit of politicians from the Indo-Pacific region at the summit of NATO countries in Madrid clearly indicated that they are looking for broad alliances and cooperation, which are to make politicians in Europe realize that the Chinese threat is real for the whole world. Poland, thanks to its exemplary relations with Australia, is an example of building global alliances of key geopolitical importance.