The G7 Summit and China

A meeting of the Ministers of Foreign Affairs of the G7 countries, Australia, India, South Korea, South Africa and the Secretary General of the ASEAN was held on May 3-5, 2021 in London. The final communiqué, which followed the talks, explicitly addressed the issues related to China. This statement was criticized by the PRC. 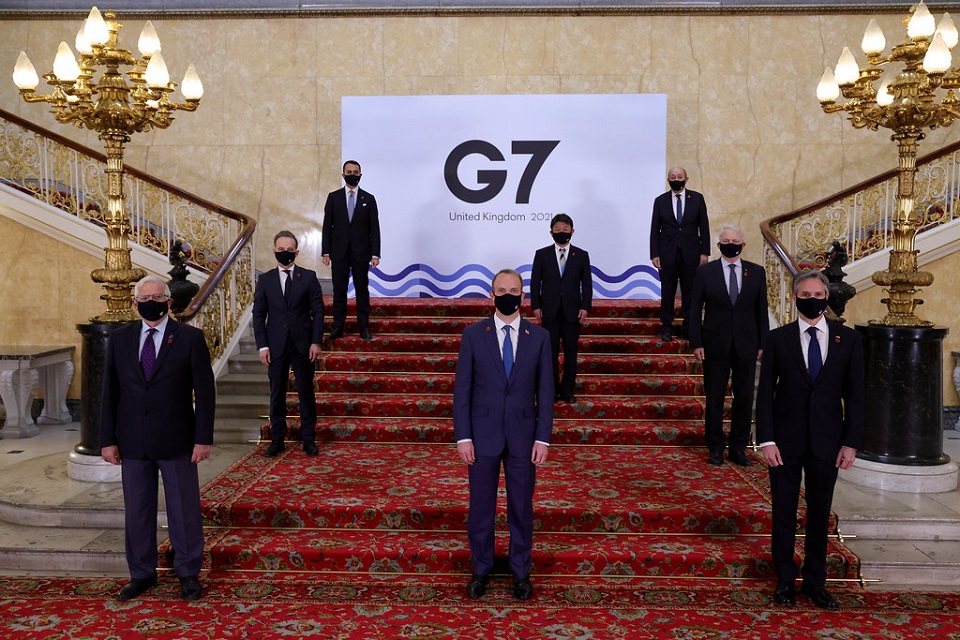 Foreign Ministers of the G7 group (Canada, the EU, France, Germany, Italy, Japan, the UK and the US) came to London for their first in-person meeting in two years instead of having a video conference. Indian Foreign Minister Subrahmanyam Jaishankar was an exception and had participated in the meeting virtually due to a concern that he might infect other conference attendees with COVID-19. Admittedly, India is not a member of the G7, but it was invited along with Australia, South Africa, South Korea and the Secretary General of the Association of Southeast Asian Nations (ASEAN). All non-G7 countries and organizations made guest appearances on the second day of the summit.
China was the main topic and the first one on the agenda. As much as two hours were allotted to this matter. In comparison, 30 minutes were devoted to the issues of Myanmar and Syria while 90 minutes to Russia. The morning session, dedicated to the PRC, was followed by a debate on Myanmar and the Middle East. In turn, the afternoon meetings included the problems related Russia, Ukraine and Belarus, but also Afghanistan. In the evening, at a working dinner, diplomats and other delegates talked about the Indo-Pacific.

The final document, adopted after the summit, called on China to participate constructively in the rules-based international system, guided by the principles such as respect for human rights and fundamental freedoms, related to Xinjiang, Tibet and particularly the Uyghurs. Moreover, the PRC was reminded that it is obliged to respect the high degree of autonomy, rights and freedoms of Hong Kong, set out in the Sino-British Joint Declaration, to withhold from attacking the pro-democratic citizens and respect the independence of the judicial system.

In terms of economic matters, in the part devoted to China, the representatives of the G7 summit noted, as nations which support free and open trade, that they expect the fair economic system, trade, investment and capital growth not to be undermined. The PRC was urged to “assume and fulfil obligations and responsibilities commensurate with its global economic role”.

Beijing was encouraged to refrain from conducting or supporting intellectual property theft by exploiting cyberspace. Besides, the participants of the summit supported Taiwan’s participation in the World Health Organization (WHO) and the World Health Assembly (WHA). Concern was expressed about the situation in the East and South China Seas, the Taiwan Strait as well as the reports of militarization, coercion and intimidation in the region.

The final communiqué of the summit could not have been ignored by the Chinese government and the media associated with it. Chinese state television CGTN wrote that “it would be a shame to not reciprocate: Stop your hypocrisies!” The Chinese media sphere also featured arguments aiming to refute the attacks of the West concerning human rights abuses in China. In a similar vein, Wang Wenbin, spokesperson for the Chinese Foreign Ministry, said that “this is gross interference in China’s sovereignty, flagrant trampling on norms of international relations and violation of the trend for peace, development and win-win cooperation of our times”.

More and more frequently, the Western countries are pursuing a policy of calling on Beijing to respect international norms in multiple public and international spheres – economy, security or human rights. This may please the Americans who were the first ones to oppose the actions of the PRC and seek allies in this endeavor. It is noteworthy that several countries of the Indo-Pacific region and a representative of the ASEAN were invited to the summit. Asia is a vital market for the economic expansion and trade of the European members of the G7. Therefore, it is crucial to continuously maintain good relations and ensure security in the region. The response to the final communiqué was typical of the authorities of the Chinese Communist Party. Given the suspended efforts to ratify the EU-China investment agreement and the current dynamics of international relations, it seems that Beijing’s image has weakened. The PRC will attempt to fix this, primarily through active vaccine diplomacy.