Defence Ministers meet in Bucharest under the B9 Format

Defence ministers from all countries included in the B9 Format take part those days in a joint meeting organised in Bucharest. The reunion is attended by defense ministers of all countries participating in the Bucharest 9 Initiative (Bulgaria, the Czech Republic, the Republic of Estonia, Hungary, the Republic of Latvia, the Republic of Lithuania, the Republic of Poland, Romania and the Slovak Republic), as well as NATO officials and representatives of the US Defence Department. The purpose of the meeting is to harmonize the national positions of the B9 member states on different topics before the NATO Summit which will take place in July. Next B9 Format meeting will take place in Warsaw. 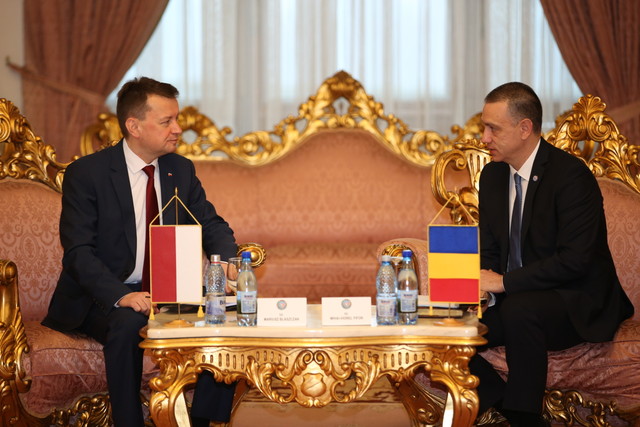 Romanian Defense Minister Mihai Fifor declared on Tuesday, during the meeting of the defense ministers under the Bucharest 9 (B9) Initiative that those states placed in the eastern flank of NATO share a series of common and particular concerns in terms of risk perception and threats to security. “From our perspective, the convergence of national approaches on current security and defense issues of the Euro-Atlantic area requires more cooperation. In this respect, the fact that NATO’s eastern flank countries share a series of common and particular concerns from the perspective of perceiving risks and threats to security, makes us consider a debate on these issues as being very useful. The B9 format is a stage of preparing and bringing together national positions needed for defining a common NATO vision which will be shared during the NATO Brussels summit in July” said Fifor, according to the Romanian media.

President Klaus Iohannis, the President of the Chamber of Deputies, Liviu Dragnea, and the President of the Romanian Senate, Călin Popescu Tăriceanu, reassured Romania’s commitment in discussing the security and defence issues of the Eastern flank, as an active and reliable member of NATO. The meeting in Cotroceni Palace was mainly focused on the preparation of the NATO Summit in July and emphasized the importance of the US presence on the Eastern flank, as an evidence of a clear commitment to the stability of the region.

Minister Mihai Fifor and Minister Mariusz Błaszczak had a joint meeting yesterday. The discussion focused on the future enhanced cooperation between Romania and Poland and their active role within the Alliance. “Russia’s activities force us to pay close attention to security. I am glad that more and more countries are granting 2% of GDP for defense. That’s what Poland does. A legislative act adopted in the Polish Parliament explicitly says that by 2030 we will spend 2.5% of GDP on defense. We also modernize our army and buy modern equipment. We discussed this topic with Minister Fifor before our meeting and this is the right way to strengthen our defense. We are perfectly aware of the threats and we are ready to ensure security. It is not just about the security of our countries, but also about Europe and the free world”, Minsiter Błaszczak declared, according to a video material shared by Agerpres (the Romanian National News Agency – www.agerpres.ro).

The Bucharest 9 Initiative was launched by Romania in partnership with the Polish authorities in 2014, as a platform designed to deepen the dialogue and consultation between nine allies: Bulgaria, the Czech Republic, Estonia, Latvia, Lithuania, Poland, Romania, Slovakia and Hungary.