Better late than never. Troublesome visit of the President of Romania to Kiev

The visit of Klaus Iohannis to Ukraine was necessary and one of the more frequent comments was “better late than never”. His presence, however, remained somewhat overshadowed by Emmanuel Macron, Olaf Scholz and Mario Draghi. There were also opinions that his presence supported their policy of concessions to Russia. The case, however, is more nuanced. 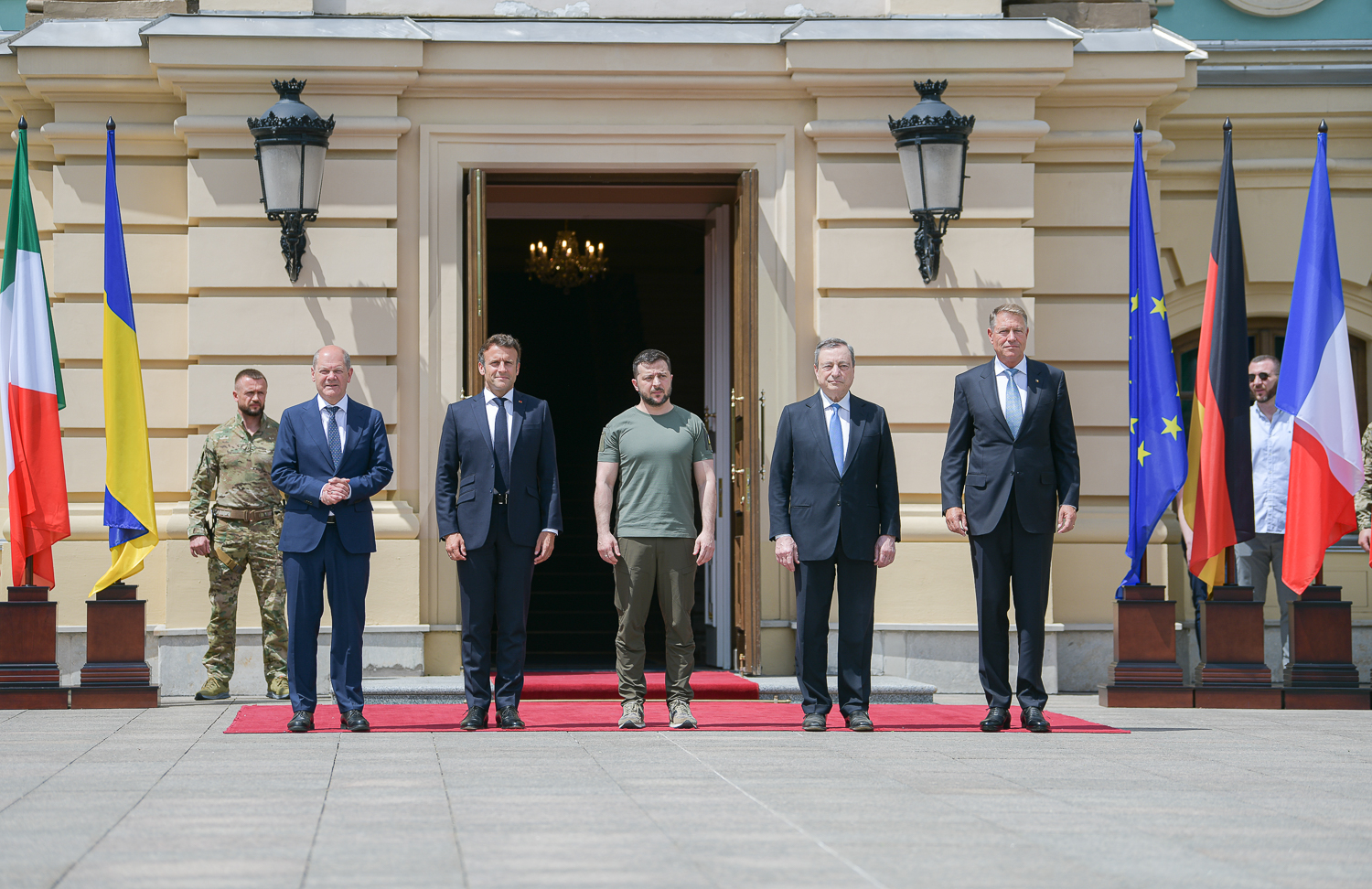 Everyone probably remembers the photos from the train bound for Kiev. French President Emmanuel Macron, German Chancellor Olaf Scholz and Italian Prime Minister Mario Draghi were sitting at the table. Only later did it turn out that the Romanian President Klaus Iohannis would also be present in the Ukrainian capital. His countrymen picked it up immediately and mocked that Romanian railways, as usual, were late. Since then, the media has often overlooked the participation of the Romanian President in the talks. Not only that, his character was sometimes not included in the published photos. These are other examples confirming the thesis that the trip was not the best idea. The presence of Iohannis, accompanied by Draghi, Macron and Scholz, could, above all, be perceived as support for their policy in relation to the conflict in Ukraine. On the other hand, there are comments that the Romanian president should have gone to Kiev long ago. The situation was therefore quite awkward, though in some respects Iohannis’s decision should have been understandable.

Between East and West

It will be a cliche to say that Romania is a very pro-Western country. This is even due to historical and identity issues. For centuries, the Romanian nation fought for independence from Turkey and Hungary, searching for its roots in Rome. In modern times, France was the country that inspired the citizens of the young Romanian state. At present, the pillars on which Romania bases its security is its presence in the EU and NATO structures. At the same time, geography cannot be deceived. Hence the involvement of the local elite in projects aimed at strengthening the region. It is enough to mention here the Bucharest Nine or the involvement in the Three Seas Initiative. Building strong ties with Poland also has a long tradition. In 1923, when the Romanian King Ferdinand came to Warsaw, President Stanisław Wojciechowski greeted him with the following words:

“The knots linking Poland and Romania do not rely solely on deep friendship between the two allied nations, but are also created by the close commonality of aspirations and interests which, excluding any differences of views, show our two countries the path leading to the realization of a common ideal. The Polish-Romanian alliance creates a solid basis for cooperation aimed at maintaining a peace paid for by such heavy victims and will help to implement the existing treaties, their benefits and the noble mission indicated by them.” Good Polish-Romanian relations have long traditions and it does not seem that anything can disturb them now.

The German Grind and the Three Seas Initiative

Klaus Iohannis’s visit to Kiev, however, turned into a kind of glitch. The president is an ethnic German and it is no malice to say that he speaks better German than Romanian. It was not without reason that the figure of King Ferdinand, who came from the Hohenzollern-Sigmaringen family, was mentioned earlier. In the 19th century, Romanians decided that the German dynasty would manage a country torn by the conflicts of corrupt boyars more efficiently. With the election of Klaus Iohannis in 2014, the public also largely expressed dissatisfaction with the country’s policies associated with corruption and the lack of rules. The president has lived up to his hopes, as evidenced by his re-election in 2019. Later he faced the crisis caused by the pandemic, now the greatest challenge is Russia’s aggression against its neighbor. It is worth recalling that from the first days of the war, Romanians rushed to help Ukrainian refugees. Military aid, mainly ammunition, also began to come to Ukraine. This country simply cannot afford more in the world. To illustrate the condition of the Romanian army, it is enough to mention that only this year the last dozen or so MiG 21s, ie planes from over sixty years ago, were finally grounded. Iohannis’ declaration on supporting Kiev’s pro-EU aspirations should be perceived as a natural and very positive consequence of previous actions. However, comments appeared in Poland that the occasion was not the best. Przemysław Żurawski vel Grajewski must have commented on it most sharply:

“As >> Die Welt” reported, Scholz, Macron and Draghi urged President Zelensky to start talks with Russia and make concessions behind closed doors. This information requires confirmation, but is not surprising. Germany and France do not want Russia to be defeated. On the contrary, Moscow, dominant in Belarus, Ukraine and Moldova, would discipline unruly Poles and keep the Balts and Romanians in obedience to Berlin, who had the fate of their eastern neighbors before their eyes. ” – wrote in an article on TVP Info, Przemysław Żurawski vel Grajewski.

So has Romania “changed front”? Certainly not. President Klaus Iohannis seems to be in a difficult situation. Accepting an invitation to travel with the leaders of Western Europe ended with a dubious success. However, it would be equally awkward (and even more so) to refuse to leave with us. However, it is worth continuing to follow the actions of the Romanian president and not judge him through the prism of a single event. It is enough to mention here, for example, the summit of the Three Seas Initiative in Riga, which has just finished. Klaus Iohannis announced that Romania will host another such meeting in 2023. He also declared that the countries associated with the Three Seas Initiative would support Ukraine in all possible ways. He emphasized that Georgia and Moldova could also count on the same support. It is difficult to find a position that would be more consistent with the Polish one.