Chinese Influence in the Slovak Information and Media Space

In recent years, the Slovak information and media space has been struggling with active disinformation actors, who have been quite willing to disseminate mostly pro-Russian narratives. China is currently an almost unknown phenomenon for Slovaks. Nevertheless, its assertive policy resonates in Slovak strategic documents alongside Russia. Although the goal is not destabilization of the democratic process, China still seeks to portray topics that the ruling party deems sensitive positively. 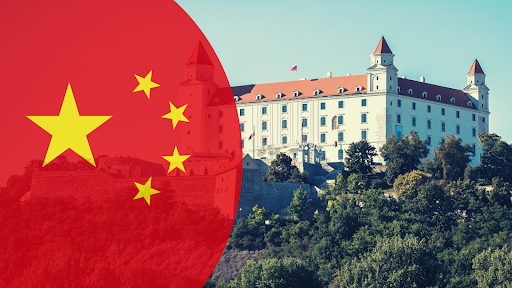 Chinese interests in Slovakia are connected with the needs of Chinese nationalism and propaganda. China has so far failed to penetrate the mainstream media to a greater extent, narratives are instead shared by the fringe and disinformation media.

According to Globsec’s research, most Slovaks think that Slovakia is too small a country for China to be interested in it at all. In 2019, 29% of respondents perceived China as a security threat. In 2020, it was only 23%. This is a shift in the perception of the Chinese side, which was also evident at the beginning of the pandemic.

Perception of China in the Public Sector

After the parliamentary elections in 2020 and the change of the government in Slovakia, the update of the strategic documents came to the fore. The conciliatory and sometimes unclear tone on foreign issues related to Russia and China has been replaced by a clear focus on the Euro-Atlantic area.

The Security Strategy of the Slovak Republic adopted in 2021 reflects the growing potential and political influence of Beijing and points to its assertive approach in promoting its interests through economic power and strategic investment.

China was also featured in the reports on the activities of the Slovak Information Service for 2018 and 2019. Economic power and the activities of Chinese intelligence services and telecommunications companies were identified as possible security risks and threats to national security.

Chinese Influence in the Information and Media Space. The Hong Kong Protests

Two critical moments with increased activity of Chinese information operations can be identified. In 2019, Beijing spread the narratives associated with the Hong Kong protests; in 2020, as part of a global information campaign communicating a positive image of the Chinese regime, it spread narratives in connection with the Covid-19 pandemic.

A good example of the exploitation of the Slovak information space for the purpose of exacerbating Chinese nationalism is the advertorial incident of Trend magazine in 2019. The Chinese media at home reported that the established Slovak media confirmed the narrative of the global Chinese campaign. The narrative itself was marked by accusations of protesters of terrorism and the West of participating in the organization of protests.

But in reality, China paid for advertising space in Trend magazine and published an article signed by the then Chinese ambassador to Slovakia, Lin Lin. The second critical moment occurred in 2020 in connection with the Covid-19 pandemic, but Trend has refused to accept a similar advertorial.

In the context of the pandemic, China’s new information strategy has gradually begun to focus on social media. At the turn of January and February 2020, localized accounts of the Chinese embassy were set up on Twitter and Facebook. They sought to spread narratives in line with Chinese interests and alleviate the perception that China was the focal point of the coronavirus it initially withheld.

The accounts spread disinformation narratives claiming that the coronavirus was the US’ plan to denigrate China or that EU and NATO were unable to cope with the pandemic. Chinese efforts on social networks in the Slovak area could be described as unsuccessful – there was no localization of content and it had a low impact.

However, the pandemic has allowed China to spread its influence. On March 19, 2020, a plane with medical supplies from China landed at Bratislava Airport, carrying a million masks and 100,000 tests.

Public opinion polls conducted in April 2020 showed that up to 67% of respondents think that China in particular has helped Slovakia in the fight against the pandemic. Only 22% of respondents felt the EU’s assistance. Disinformation narratives that claimed that the EU (but also NATO) is unable to help its member states have also had an impact.

Apart from the two mentioned incidents, however, China, as a topic, is rather on the fringes of the interest of opinion-forming media. This is also related to the low interest and awareness of China in the case of the Slovak population. China-related topics mostly remain in a space of neutral content reported by Slovak news agencies.

The news are often taken over by some disinformation actors, who are trying to penetrate the mainstream. Less objective comments or analyses occur in this area in the case of articles taken over from Russian sources. Especially in the case of topics in which Beijing and Moscow share a common adversary.