The Chinese ambassador to Britain has been banned from attending an event in the British parliament, according to a decision made in mid-September. The reason for that was that Beijing imposed sanctions on some British lawmakers. China condemned the move and pledged retaliatory measures. 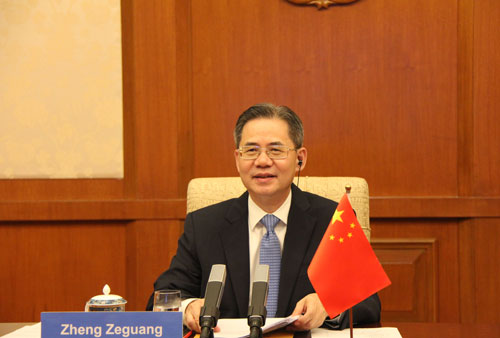 The sanctioned lawmakers passed on their comments and concerns over inviting Zheng Zeguang. These were taken into account. The speakers of the UK House of Commons and House of Lords have decided that “the APPG (All-Party Parliamentary China Group) event with the participation of the Chinese Ambassador to the UK should not take place at the parliamentary estate” and that “the Chinese Ambassador should be banned from (activities held at) the parliamentary estate.[i]”

The party to be attended by the Chinese ambassador was held jointly by the APPG and the China-Britain Business Council at the Palace of Westminster. Despite this, the China parliamentary group still decided to invite Zheng to its summer party, but the event was eventually postponed[ii].

Zhao Lijian, a spokesman for the Chinese foreign ministry, strongly denounced the UK Parliament’s banning of China’s ambassador from attending events and vowed that China would take necessary responses. China’s sanctions on a handful of anti-China parliamentarians of the UK were completely justified and reasonable, he added. “With regard to any words and deeds that are detrimental to China’s core interests, the Chinese side always responds resolutely,” he was quoted s saying. He urged the British Parliament to immediately rescind its wrong decision and earnestly restrain the words and deeds of certain members[iii]. The Chinese Embassy in the United Kingdom described the move as “reckless and cowardly,” saying it would damage the interests of both countries[iv].

In an article, the Global Times said that the United Kingdom is a “natural pawn” in the US’ containment strategy against China. Further in the text, its authors referred to the UK’s decision as “one of the most vivid signs of the UK’s decline.” They encouraged state authorities to take necessary corresponding measures. The article threw some offensive words at the United Kingdom, labeling it cowardly, hooligan, capricious, sensitive, self-abased, and exasperated by its behavior[v].

Relations between the United Kingdom and China are worsening. On July 14, 2020, the British government said that it would ban the purchase of new Huawei equipment for 5G networks. The new sanctions are another example that the United Kingdom will not bend to China’s will. Furthermore, the United States, Australia, and the United Kingdom on September 15 said they would create the trilateral security partnership scheme, named AUKUS, to contain China’s growing reach. This does not bode well for the China-Britain ties.