China-Russia military drills Naval Interaction-2021 began on Thursday, October 14, near Russia’s Peter the Great Gulf in the Sea of Japan. This is another rapprochement between Beijing and Moscow, which might lead to an alliance. Moreover, it highlights the need to respond to aggressive actions of the West, as China and Russia perceive them. 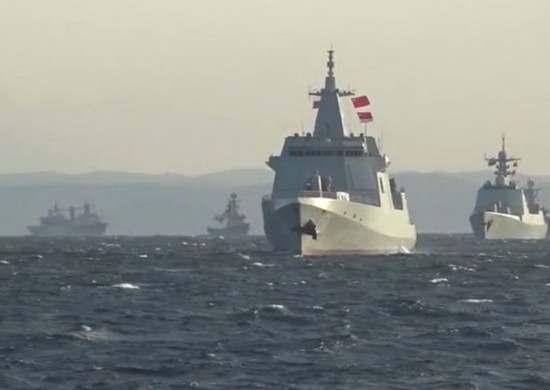 The Chinese People’s Liberation Army (PLA) sent five warships to the exercises – the Type 055 destroyer Nanchang, the Type 052D destroyer Kunming, two Type 054A frigates (Binzhou and Liuzhou), as well as the Type 903A replenishment ship Dongpinghu. In addition, it sent the fixed-wing anti-submarine warfare aircraft and shipborne helicopters from the Eastern, Southern, and Northern Theater Commands.[1] First of the destroyers deserves special attention since it was used during joint exercises for the first time. It entered into service a year ago. Its main task is to escort Chinese aircraft carriers.[2] Russia also sent five ships – missile destroyers Admiral Panteleyev and Admiral Tributs, a tracking ship Marshal Krylov, as well as corvettes Aldar Tsydenzhapov and Gromky.[3]

On October 15, during the maneuvers, the Russian Ministry of Defense reported that a Russian warship had prevented a US Navy destroyer from attempting to invade Russian territorial waters in the Sea of Japan. The US called this statement false, saying that the interaction was “safe and professional.”[5] It can be assumed that this diplomatic provocation by Moscow was meant to show that the US and its allies should not interfere in the cooperation between Russia and China.

On October 18, for the first time ever, Chinese and Russian ships jointly sailed through the Tsugaru Strait, located between the Japanese islands of Honshu and Hokkaido. Most probably, this will cause concern in Tokyo, which will interpret these actions as a warning. The entire passage was closely monitored by a Japanese P-3C maritime reconnaissance and patrol aircraft as well as two minesweepers. Although the movement of the ships took place on international waters, it still occurred in a rather sensitive area, close to Japan’s territorial waters.[6] The Chinese ships were the same group that Japan’s Ministry of Defense identified near Tsushima Island on October 11.[7]

According to the Global Times editorial, Russian and Chinese exercises were “defensive in nature” while close cooperation between the two countries is inevitable. Moreover, the Western world should not criticize it.[8]

The maneuvers occur during the formation of the AUKUS and QUAD alliances, which, in the opinion of Moscow and Beijing, are targeted at them. Japan, which is in dispute with Russia over the Kuril Islands, may likewise feel threatened by the cooperation between the navies of China and Russia. It should be assumed with high probability that similar maneuvers will be held again and that the strategic alliance between Beijing and Moscow will be developed further.