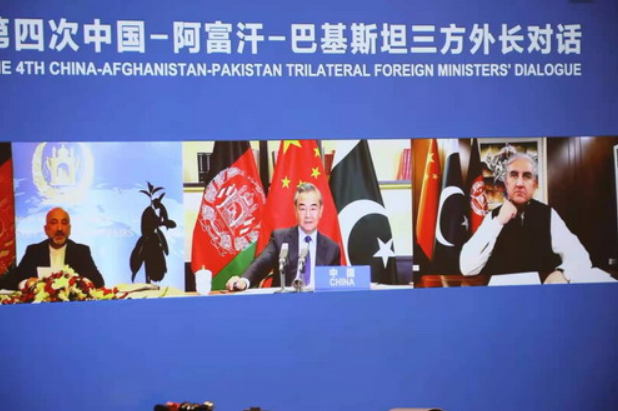 Wang Yi was joined by Afghan Foreign Minister Mohammad Haneef Atmar and Pakistani Foreign Minister Shah Mahmood Qureshi via video link. The head of the Ministry of Foreign Affairs of the PRC said during the meeting that the current international and regional situation is undergoing complex and profound changes. The foreign troops are rapidly withdrawing from Afghanistan, the peace process is being threatened, while armed conflicts and terrorist activities are becoming more and more frequent. According to Wang Yi, it is absolutely necessary for the three countries to strengthen communication and cooperation, given the current circumstances.

Second, it is crucial to sustain the momentum of talks within Afghanistan. China is pleased with the recent resumption of dialogue between the Afghan government’s peace negotiating team and Taliban negotiators in Doha. Moreover, the PRC hopes that a roadmap and a timetable for future action would be prepared shortly.
Third, the Taliban have to be brought back into the political mainstream. China hopes that the Afghan government would encourage the Taliban to leave the differences behind and that they would meet each other halfway in negotiations.

Fourth, the international community and the countries in the region should provide full support. China, Afghanistan and Pakistan should collaborate to push for an orderly withdrawal of American troops. Wang Yi pointed to the China + Central Asia (C+C5) group and the Shanghai Cooperation Organization (SCO) as forums through which Beijing would support their increased activity, concerning the matter of maintaining peace in Afghanistan.

Fifth, efforts should be made to strengthen cooperation among China, Afghanistan and Pakistan. China hopes that Pakistan would continue to make good use of its assets and step up new, constructive efforts to aid negotiations between parties in Afghanistan. Beijing proposes to sustain the China-Afghanistan-Pakistan trilateral dialogue of Foreign Ministers.

The Foreign Ministers of Afghanistan and Pakistan positively assessed the achievements of the trilateral dialogue mechanism and Chinese contribution to promoting trilateral cooperation. Given the complicated developments in the region, Afghanistan and Pakistan would like to cooperate with Beijing in order to forge a closer partnership and strengthen joint efforts to build the Belt and Road Initiative.

Beijing is becoming more and more interested in Afghanistan and it frequently appears on the agenda of the Chinese diplomacy. This is primarily due to the withdrawal of American forces from that country, which could lead to another civil war and destabilization of the region. The PRC is involved in the Afghan peace process for several reasons. First, China is concerned about the geographic proximity of Afghanistan, the home of the Taliban and other international terrorist organizations, and the Uyghur-dominated Xinjiang region, whose inhabitants could increase their activity in China. Second, the PRC fears that continued political instability in Afghanistan could derail the progress of Beijing’s Belt and Road project. Third, China is trying to position itself not only as a regional, but also a global superpower, engaged in solving the world’s problems.

The role of Pakistan in the Afghan peace process is significant because of its long-term, multi-layered ties with political actors in this country, particularly the Taliban. Additionally, Pakistan is one the allies of China, which is associated with a greater trust of Beijing. Given the shared goals and relationship, cooperation between Beijing and Islamabad seems natural in terms of the Afghan matter. Further trilateral meetings as well as constant monitoring and stimulation of discussions on the above issue by the PRC should be expected.