Central Asia in the Crosshairs: Russia Braces for Tsentr-2019 Drills

Russia’s Defense Ministry has announced that around 128,000 people, over 20,000 military vehicles, 600 aircraft and choppers, and up to 15 ships will be employed in the Tsentr-2019 exercise (also referred to as Center-2019) this September. Soldiers from the People’s Republic of China, the Islamic Republic of Pakistan, the Kyrgyz Republic, the Republic of India, the Republic of Kazakhstan, the Republic of Tajikistan, and the Republic of Uzbekistan will be engaged in the drills together with the Russians. The declared goals of the exercise, its scale, and the level of engagement of some Central Asian countries confirm the growing interest of Russia in this region. Over the past year, Moscow has clearly intensified its diplomatic, military, and economic initiatives in its relations with the post-Soviet countries of the region. One of the effects of this is the participation of soldiers from Uzbekistan in Tsentr-2019. There are two main reasons for Russia’s return to Central Asia. First of all, Russia wants to play an important role in Afghanistan, and secondly, it attempts to halt the growing Chinese influence (demonstrated for instance in the joint military exercises of China and Tajikistan in the Tajik Pamirs). 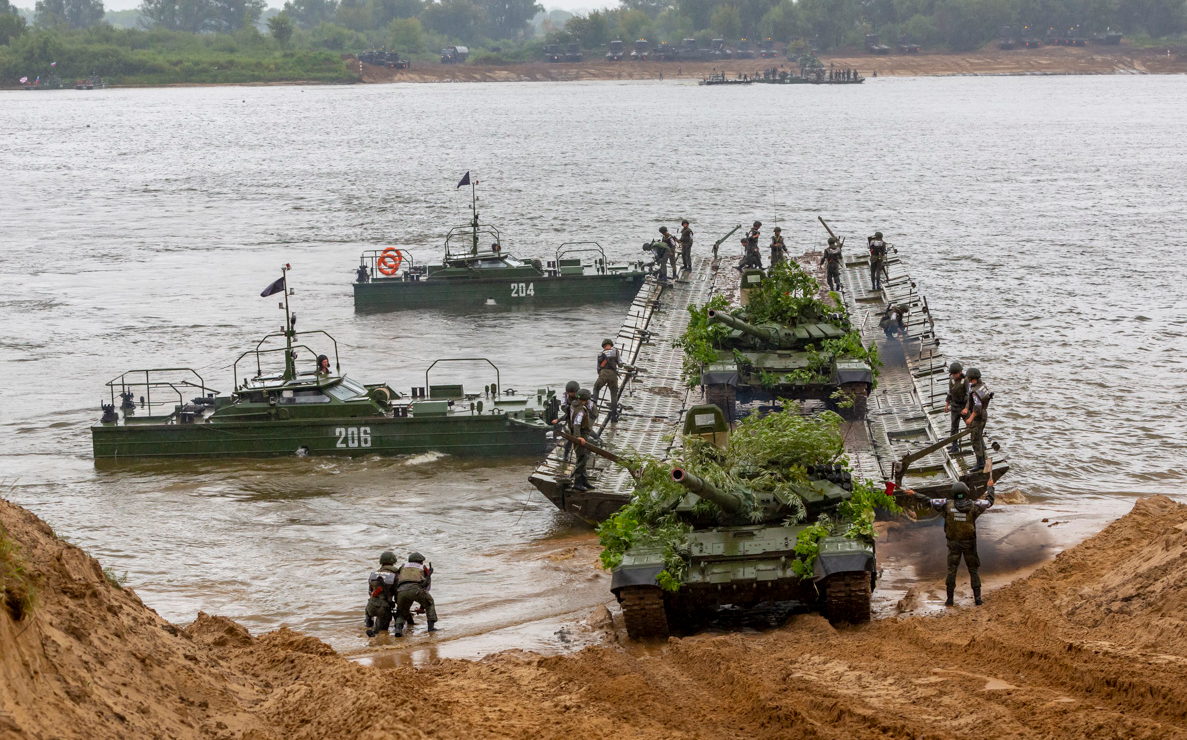 Tsentr-2019 is an example of the most significant annual military drills of the Russian Armed Forces. They take place every year (in rotation) in one of the four of Russia’s strategic directions. A year ago, they were launched in the East (Vostok-2018). In previous years, they were organized as Zapad-2017, Caucasus-2016, Tsentr-2015, Vostok-2014, Zapad-2013, etc.). The summer season of exercises of the Russian Armed Forces began on June 3, 2019. Tsentr-2019 is planned to be its culmination. Strategic command post drills will take place on September 16–21, 2019.

The drills will be held in two stages. In the first one, command officials will be simulating the directing of troops in the fight against terrorism, repelling aerial attacks, and conducting intelligence, search, and defense activities. Stage two will concentrate on the management of subunits in a massive enemy offensive and the attacks on the enemy. The main parts of the exercises will be carried out on eight proving grounds: six all-military (Totskoye, Donguz, Adanak, Cherbakul, Yurginsky, Alyeskiy) and two anti-aircraft grounds (Ashuluk and Safakulevo). Separate “episodes of fighting illegal armed groups” are to be implemented on the proving grounds of partner countries. In addition, the drills will also include the Caspian Sea basin, where the cooperation of the fleet with land forces, defense of maritime transport, and economic activity at sea will be exercised.

The exercises will engage commanding authorities and units not only of the Central Military District, but also the Caspian Fleet belonging to the Southern Military District, part of the forces of the Eastern Military District, units of the Airborne Troops, transport aviation, and long-range Aerospace Forces. Up to 13,000 soldiers, including 10,700 Russians, up to 250 tanks, 450 BMP and BTR, up to 200 artillery, and rocket systems will participate in practical operations in the Donguz, Totskoye, and Adanak proving grounds in the European part of Russia. The emphasis will be to check combat readiness of the Russian Army in Central Asia. The exercises will be conducted under the command of the Chief of General Staff of the Armed Forces of Russia, General Valery Gerasimov.