Caspian Opportunity for the West

The hydrocarbon-rich Caspian Sea region may constitute a real chance for global oil markets, which are currently looking solutions to increase their output. Though rich in resources and easily accessible, the Caspian Sea deposits were prevented from being extracted due to the unregulated status of the coastal sea of Russia, Kazakhstan, Turkmenistan, Iran, and Azerbaijan. The August convention on the Caspian Sea’s legal status finally paves the way for the development of Trans-Caspian oil and gas transport. The development of Caspian hydrocarbon exports, with the current output of 2 million barrels per day, would improve the situation on the world oil market, for example by increasing the amount of raw material, reduced as a result of the civil war in Libya and U.S. sanctions against Iran. This may also provide an opportunity for the region’s political stabilization as well as eventually result in a more effective rivalry between the West and both Russia and Iran. 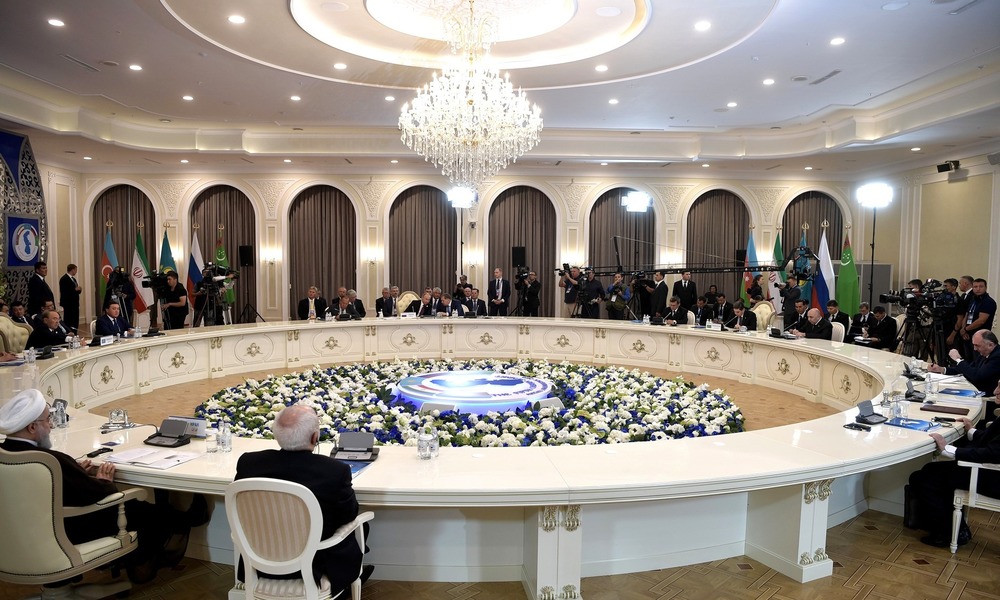 Since the 1990s, the Caspian Sea region has attracted Western energy investors. Both Azerbaijani and Kazakh gas and oil were to play a key role in the diversification of hydrocarbon supplies to Europe while the U.S. administration and the European Union strongly advocated the idea of the so-called Southern Corridor – a huge set of oil and gas pipeline as well as terminals to handle energy resources. The region’s largest international investment is a joint venture company tasked with handling Kazakhstan’s Kashagan oil field, with the total output of 300,000 barrels per day.

The consortium includes numerous global firms, such as ExxonMobil, Shell, Total, ENI, China National Petroleum Corporation, KazMunayGas, and Inpex. In turn, the Chevron-lead holding keeps developing its oil production in the Kazakh field of Tengiz, aiming to boost the output to the level of 260,000 barrels per day. In addition, the Western firms have already pumped about 40 billion dollars into the Southern Gas Corridor that brings gas from Azerbaijan’s field of Shah Deniz to Italy. Theoretically, the Caspian Convention enables Western companies to reach gas fields in Turkmenistan, located more to the east.

The wars in the Caucasus and the aggressive Russian policy of blocking competitive Caspian exports have long prevented the region’s hidden potential from being unveiled. The Caspian Sea Convention, ratified in August by all five Caspian coastal states, aimed to set issues regarding the division of the sea’s waters and its huge natural resources, paving the way for the construction of new pipelines. Moscow agreed to put an end to the long-standing dispute, though it did not make such a decision due to the pressure from Western states; the Kremlin will not allow any hydrocarbon exports to Europe, either. It is rather a reaction to China’s commercial expansion, exemplified by the One Belt, One Road concept, and an increasingly serious economic attitude towards China and Iran observed particularly in the Central Asian countries. Due to the problem with the hydrocarbon transport through the Caspian Sea in western direction (to Europe and Russia), the resources are now increasingly exported to the east (China) and south (Iran). The opening of the Caspian Sea region will make it possible to Moscow to bargain for the Nord Stream 2 project. It seems that also Berlin will now be able to admit that the gas pipeline through the Baltic Sea can hardly come as Russia-provoked EU dependence on the resources as the Russians are simultaneously seeking to pave the way for diversifying gas supplies with Caspian reserves. Not incidentally, Angela Merkel paid a visit to Azerbaijan only two weeks after sealing the convention.