Bucharest, the Stage of 3 500 Troops and Vehicles, as Part of the Romanian National Day Military Parade

The 99th celebration of the Romanian National Day was marked by military parades all over the country. With Bucharest as a main stage, 3 500 troops of the Defence Minister, Internal Affairs and Romanian Intelligence Service, 350 armed vehicles and several troops belonging to NATO allies marched under the Triumphal Arch, the symbol of Romania’s successful battles during the 1st World War. The South East Multinational Brigade, created in Craiova after the 2016 Warsaw NATO Summit was represented, among others, by Romanian, Canadian, French, British, American and Polish troops. President Klaus Iohannis and PM Mihai Tudose joined the manifestation. 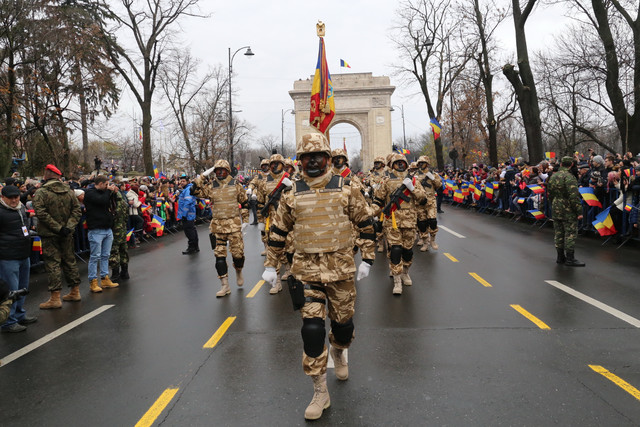 December 1 marks the National Day of Romania, being recognized as the day in which, in 1918, the Union of Transylvania with the Romanian Kingdom was declared by the Assembly of the Delegates, held in Alba Iulia. Even if Romanian authorities were forced to flee Bucharest and move to Iasi in 1916, the successful battles of the Romanian Army fighting the German troops in the Carpathian Mountains and the end of the war realized the unification not only with Transylvania, but also with Banat, Bessarabia and Bukovina provinces. This year’s demonstrations prepared, with one year in advance, the massive deployment of forces that will take place in 2018, when Romania celebrates the Centenary, the 100th anniversary of the Great Union.

The military parade in Bucharest offered the stage for Romania’s Army new acquisitions to come into light. Apart of the new models of fire and low temperature material resistant uniforms, dedicated to infantry troops, the attention was triggered by the new armed vehicles which recently entered the service of the Romanian Defence Minister. The Land Forces Technique Detachments were made up by armored personnel carriers, URO VAMTAC, used both during internal and external missions, Piranha vehicles and by Romanian built Zimbru B33.

Romanian tanks were part of the parade, GEPARD anti-aircraft artillery systems, LAROM missile launchers and anti-aircraft systems, with the TR 85 M1 Romania designed tank which was recently modernized and upgraded. Thus, the “Bison” version, compatible with NATO standards, made out of the TR tanks one of the most reliable weapons of the Romanian army. The upgrade of TR had the purpose to give a new boost to Romanian heavy weapons industry, as Romanian authorities recently reassured its NATO allies about keeping the defence expenditures at a level of 2% of GDP. The Polish Army was represented by a detachment of military officers from the 17 Wielkopolskie Brigade, who took part in Chad and Afghanistan missions, as well as the 10th Logistics Brigade.

The December 1 parade paid tribute to a detachment of soldiers wounded in Western Balkans, Iraq and Afghanistan, led by Captain Adrian Ciprian Iriciuc, injured in Afghanistan. According to Romanian Defence Ministry, 29 Romanian soldiers have died in external missions and 180 were injured, since 1996.