Biden-Putin Meeting: Kremlin Has Reasons To Be Pleased

After a video link with U.S. President Joe Biden, Vladimir Putin said that Moscow would submit its proposals for a security dialogue with the United States in a few days. Biden said he would announce the date of a meeting of five major NATO allies and Russia, to discuss the future of Russia’s concerns relative to NATO. All signs are that the December 7 meeting opened a new chapter in U.S.-Russia negotiations, where the Kremlin chooses what to discuss. 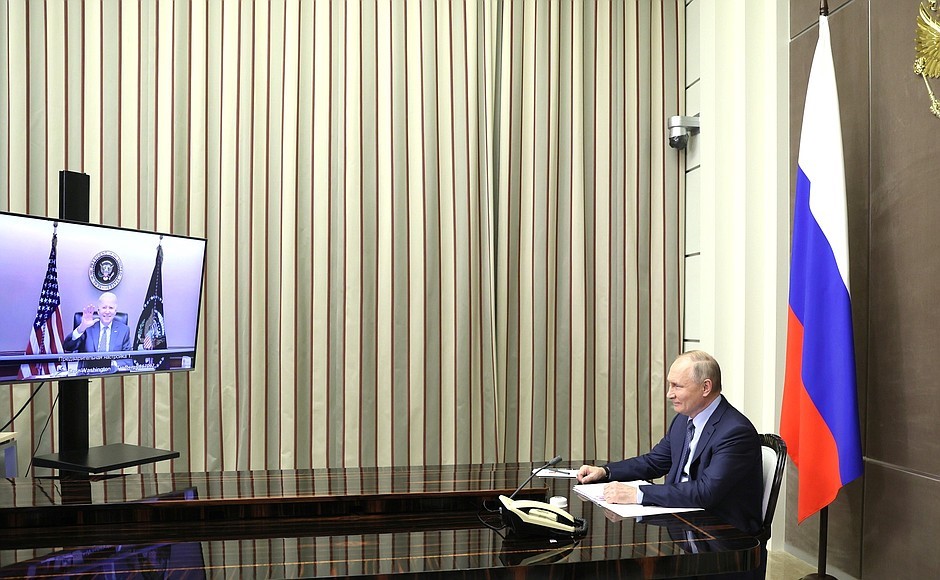 Vladimir Putin spoke first after the meeting with his U.S. counterpart. A day later, following talks with the Greek prime minister, the Russian leader repeated his insistence that Ukraine should not join NATO. President Putin said if Ukraine joined the bloc then military contingents, bases, and offensive weapons would follow. Russia views the prospect of Kyiv joining the Western alliance as an effort to cross a “red line.” Russian President Vladimir Putin promised that Moscow would submit its proposals for a security dialogue with the United States in a few days, one of few conclusions of the two-hour meeting on December 7. Washington’s moves could have been set back then, too. Biden revealed them to the public the next day. He said he would announce the date of a meeting of five major NATO allies and Russia, to discuss the future of Russia’s concerns relative to NATO. The White House confirmed what the Kremlin said in a press release on December 7 that Biden and Putin agreed to further low-level talks through already proven platforms, including the NATO-Russia Council. President Joe Biden on December 8 ruled out sending US troops to Ukraine to defend the country from a Russian invasion a day after laying out the consequences for such an incursion during a stern phone call with President Vladimir Putin. Both this and plans to hold talks between the United States, NATO’s group of five, and Russia weigh more than what was declared shortly after the Putin-Biden meeting. Naturally, Biden said he warned Putin he would impose sanctions “like none he’s ever seen” should the Russian troops massed on Ukraine’s border escalate into an assault. However, the Russian leader is unlikely to launch an offensive as he is now intimidating the West and exploiting Biden’s vulnerability. The December 7 meeting paved the way for Western guarantees that Ukraine would never join the North Atlantic Alliance. But Putin has a more important reason to be pleased. Before and after his conversation with the Russian leader, Biden spoke with the leaders of France, Germany, Italy, and the UK to debrief them on the call and to consult on the way forward. These countries, which are part of NATO’s group of five, would see Russian officials for talks about the entire alliance. This is meant just to categorize NATO states. It is perilous for the Western military bloc yet tempting for Russia.