The President of the United States made an important visit to Asia. The purpose of the Joe Biden administration was to explicitly respond to the growing threat posed by the Xi Jinping regime to the anti-Chinese states. Biden visited South Korea and Japan, where he took part in the next summit of the member states in the QUAD format. 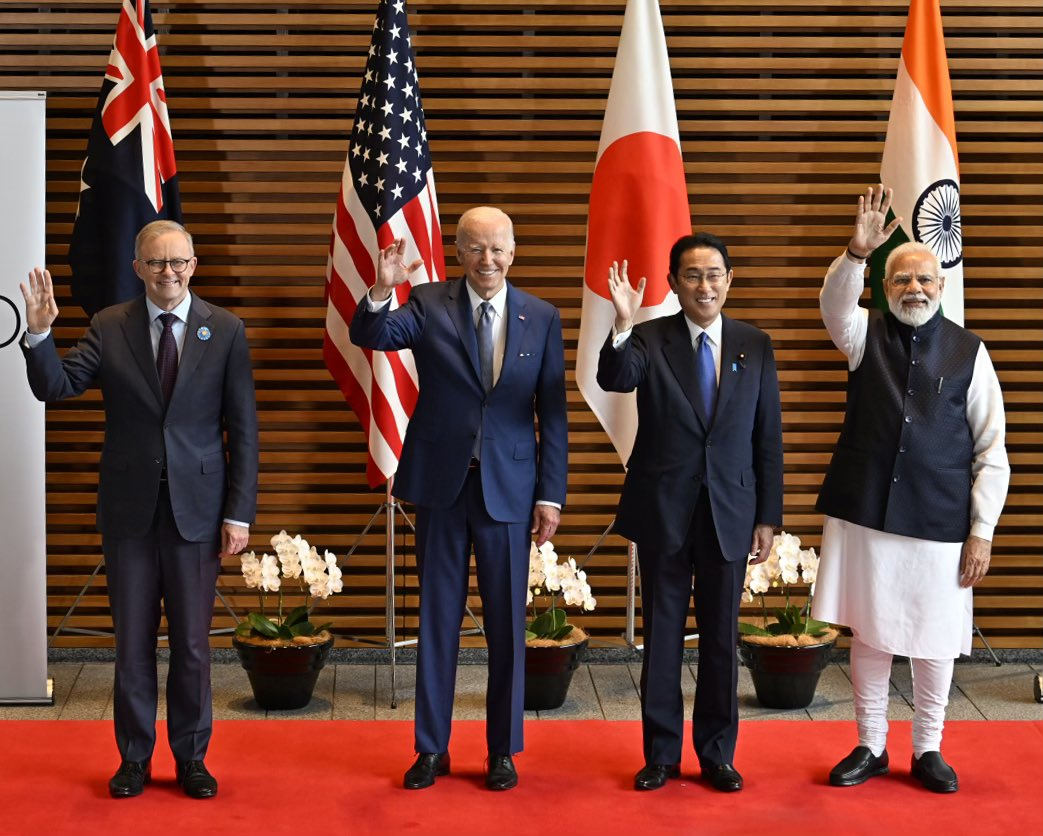 Joe Biden’s visit to Asia began in South Korea on May 20, 2022 and lasted two days. During this time, the US president met with the recently sworn in president of the Republic of Korea, Yoon Suk-yeol. The conversation between the leaders of both countries was not a coincidence, as it was Yoon Suk-yeol in his election campaign who called for a significant strengthening of bilateral relations between the United States and South Korea. The message promoted by the Korean politician goes hand in hand with the voice of most of the countries in the region that are resisting China’s growing territorial and political aspirations. The reason for actions to strengthen relations with Washington is not only the issue of the threat coming from North Korea, but also from the People’s Republic of China in the Indo-Pacific region.

The American delegation’s talks with South Korean representatives resulted in a series of agreements that include cooperation in the fields of semiconductor production, batteries, civil nuclear energy, space research development, cyberspace and other emerging industries. The goal of the leaders of both countries is also to strive for economic diversification of South Korea, so as to make it as independent as possible from China, which still remains the main trading partner of the country led by Yoon Suk-yeol. President Biden’s administration is well aware of the economic and defense potential represented by the Republic of Korea. The potential weakening of the economic ties or the complete severance of South Korea’s economic ties with China will mean losses of Xi Jinping’s regime amounting to up to $ 150 billion annually. This was the value of Chinese exports to South Korea last year.[1] However, Korea is gradually breaking its economic ties with the People’s Republic of China, in April 2022 the value of their exports to China fell by almost $ 26 billion.[2] Biden’s visit to this country is a clear response to China’s growing sphere of influence. The United States shows that it continues to have full control and arguments towards the proliferation of the Pax Americana doctrine in this region of the world.

After his visit to Korea, Joe Biden landed in Japan, where the group of the most important US partners in the region was expanded by representatives of the QUAD countries. On Monday, the US President, during a joint press conference with Japanese Prime Minister Fumio Kishida, gave a strong start to his visit, assuring that in the event of a mainland China attack on Taiwan, the US would respond militarily. The words spoken in the near vicinity of the People’s Republic of China are of great importance and constitute a serious warning to the Xi Jinping regime. They are a signal to the Chinese communists that the United States is confident and absolutely ready to defend its hegemony.

According to CNN, Biden’s comments quickly caught the Chinese government’s attention. China expressed its “strong dissatisfaction and firm opposition” to Biden’s comments, saying it will not allow any external force to interfere in its “internal affairs.”[3]

During bilateral talks with the Prime Minister of Japan, Fumio Kushida, Joe Biden supported the Japanese plan to increase defense capabilities, thus confirming the cooperation of the United States with Japan to counter China’s growing influence in the Pacific.

“The US-Japan alliance has long been the cornerstone of peace and prosperity in the Indo-Pacific, and the United States remains fully committed to Japan’s defence,” Biden said at the beginning of talks with Kishida at the Akasaka Palace in central Tokyo.[4]

In Tokyo, President Biden initiated the Indo-Pacific Economic Framework for Prosperity (IPEF) with over a dozen initial partners: Australia, Brunei, India, Indonesia, Japan, the Republic of Korea, Malaysia, New Zealand, the Philippines, Singapore, Thailand and Vietnam. Together, these countries account for 40% of world GDP. The Biden plan will focus on four key pillars to establish high standard activities that will deepen the economic commitment of the signatories in the region. It is about building new economic connections between the countries of the region, supporting small and medium-sized enterprises, improving supply chains, making the economy more resistant to price changes, increasing the share of clean energy and decarbonisation in the economy, as well as implementing tax changes and preventing financial crime.[5]

At the four-party meeting, the United States, Japan, Australia and India publicized a maritime initiative to reduce illegal fishing in the Indo-Pacific. It is one of the latest efforts of the QUAD allies to counter Chinese activities in the region. China is responsible for 95 percent of illegal fishing there.[6]

QUAD leaders stressed the need for free navigation in the East China Sea and the South China Sea, and expressed opposition to the militarization of disputed areas.

During the four-party negotiations, it was also announced that ties with the island states of the Pacific area would be strengthened. It is about both bilateral and multilateral alliances. One of the reasons for such declarations is the signing of China’s recent agreement with the Solomon Islands.

The four Allies concluded Tuesday’s summit with a joint statement in which they pledged “a relentless commitment to a free and open Indo-Pacific region that is inclusive and resilient.”[7]

The aim of the leaders’ meeting was to respond to the growing role of China in the region, but on the occasion of this summit, there were also bilateral talks between the United States and India. Joe Biden is well aware of the important role that Prime Minister Narendra Modi’s state plays in the durability of the Indo-Pacific security system. India, however, has not denied its connections with the Russian Federation after Vladimir Putin invaded Ukraine three months ago. Both countries have long enjoyed friendly relations and close defense cooperation. This is evidenced by the fact that over 50% of Indian military equipment comes from Russia.

During the meeting, Biden was the first to speak. The president highlighted the newly disclosed economic plans of the anti-Chinese coalition in Indo-Pacific waters, as well as ongoing efforts to support India’s Covid-19 vaccine production. Modi then made his comments, calling the Tokyo Summit “very positive and productive”. He praised the US-India relationship as a “partnership of trust” and a force for global good.[8]

However, Biden’s strategy in these relations is to build relations on the basis of the similarities that characterize both countries and interests in the region. Despite differences in perceptions of human rights or relations with Russia, according to a high-ranking US administration official. The United States is working hard to intensify India’s cooperation with the Free World.[9]

The newly sworn in Prime Minister of Australia Anthony Albanese and Joe Biden also met in Tokyo. Just three days before the summit began, the Labor Party won the elections, and its leader became the new prime minister several hours before his departure to Tokyo. The meeting of the leaders of both countries was to confirm the firm alliance of the United States with Australia, discuss current issues related to cooperation within AUKUS and in the fight against global warming. Albanese added during the meeting that he is looking forward to welcoming Biden and Indian and Japanese leaders to the next QUAD summit in Australia in 2023.

One thing is for sure, Joe Biden is skilfully and confidently working to strengthen the Indo-Pacific partnership. The US president spent his trip to Asia meeting with South Korean and Japanese leaders, discussing the potential intensification of joint military exercises with South Korea. Joe Biden also pioneered the Indo-Pacific Economic Framework. Only united, economically and militarily strong states associated in the QUAD system and the bilateral relations of the United States with their allies are able to stop the growing aspirations of the People’s Republic of China. The visit of the US president to Asia became the next step in the implementation of the political doctrine of “Pivot to Asia” and keeping the “Pax Americana” in this region of the world.