The consistent efforts of the conservative Polish government, conducted since inter 2015, to build a free market in gas in East-Central Europe, are effectively hindering Russian Gazprom from maintaining its dominant position in this part of Europe.

Bóbrka, Poland, September 11, 2011. The Ignacy Łukasiewicz Museum of Oil and Gas Industry in Bóbrka is located at the Bóbrka mine — the oldest oil extraction plant in the world. © Paweł Pawłowski (PAP)

Poland is the cradle of the global oil and gas industry. This is symbolized by the fact that it was in Poland in 1854 that Ignacy Łukasiewicz invented the kerosene lamp. Also in Poland, the first gas pipeline in Europe was built in 1912. Despite this proud history, Polish energy policy as implemented in free Poland after the fall of communism, including in the gas sector in particular, has been saddled with many handicaps. The lack of a strategic vision, lack of courage to take on the burden of carrying out large, ambitious projects, and the lack of ability to build coalitions with Poland’s allies in the region and the world, caused Poland to gradually lose its energy independence. At the same time, Gazprom’s web increasingly entwined Europe, and the specter of Europe’s total dependence on Russian gas became ever more real.

In recent years, Poland’s role as a regional leader in the energy market has been restored. This process was initiated by the late Lech Kaczyński, who in December 2005 became the president of the Republic of Poland. Thanks to his initiative in 2006, Poland began a 10-year-long (and ultimately successful) project to build a terminal for receiving Liquefied Natural Gas (LNG) in Świnoujście on the Baltic Sea. It was on the initiative of the Polish president in May 2007 in Kraków and in October 2007 in Vilnius that Poland, Ukraine, Georgia, Azerbaijan and the Republic of Lithuania, agreed on the necessity of building a corridor for the transport of Caspian oil. The corridor would pass through Odessa–Brody–Płock–Gdańsk, thus bypassing the territory of Russia. The tragic death of the President on April 10, 10, 2010, in the Smolensk catastrophe, interrupted this project, and it lost its biggest promoter. To understand the significance of Polish reforms that have been implemented by the Law and Justice (PiS) government since 2015, it is necessary to describe the situation at the start and indicate key changes and further directions of development.

At the end of 2015, Polish gas imports came almost entirely from Gazprom. The position of the Russian monopoly was strengthened by an annex to the Yamal agreement of 2010, by the government of Donald Tusk, which increased Poland’s dependence on Russian supplies until 2022. The Yamal contract still contains a number of adverse provisions for the Polish side, including price indexation for crude oil prices and ToP (take or pay) clauses, i.e. the provisions which shortly thereafter triggered the effective resistance of Gazprom’s leading European contractors[1]. Poland’s weak position on the basis of the Yamal contract is also evidenced by the fact that, according to Interfax, in 2014 Poland paid more than ten percent over the EU average for gas and as much as twenty percent more than neighboring Germany; despite the obvious fact that the cost of gas transport to Poland was lower than to most of these countries. Significantly, this contract was concluded after the supply crises of 2006 and 2009, when it became clear to everyone that Putin’s Russia was not a reliable supplier and not long after the Security of Supply (SoS) Directive[2] was adopted on measures to ensure security of electricity supply and infrastructure investments. Poland was not the only country to have such an agreement, but due to the lack of alternative sources of supply and neglected infrastructure, the sensitivity of our country to Russian blackmail was particularly high.

Baltic Pipe and Other Diversification Attempts — in the Past

The decision of the post-communist government (2001–2005) to withdraw from the construction of the gas pipeline linking our country with Norway, turned out to be particularly negative for the independence of Poland from the supply of Russian gas. If this project had been implemented in accordance with the 2001 agreement then in 2008[3] Poland would have had an alternative source. Better still, the supplier would have been one of the three largest gas producers in the world, as well as Poland’s ally and a much more credible partner than Russia. With regard to this contract, it is often claimed that gas imported from Norway would be more expensive than Russian gas. However, this is denied by Polish Petroleum Mining and Gas Industry (PGNiG) authorities, who confirm that for north-west Poland, Norwegian gas would not be more expensive than gas purchased from Gazprom. Obviously, the possibility of obtaining supplies from two sources would also generate a positive external effect, in the form of improving Poland’s negotiating power with Russia.

The Polish negotiating position in 2010 could also have improved by the possession of physical reverse flow service on the Yamal pipeline, which only appeared in 2014, or the construction of the LNG terminal in Świnoujście, which was not put into operation until 2015 and where the first LNG carrier was received in June 2016.

At the same time, Gazprom successfully diversified its transmission channels and undertook other activities aimed at strengthening its position vis-à-vis EU countries, including Poland. In 2011, the company commissioned a study for an expansion of its pipelines, what was later named Nord Stream 2, a project that is obviously not economically defensible in the absence of regulatory preferences from the European Union, and whose only purpose is to allow Gazprom to circumvent transit through the Brotherhood and Yamal pipelines. The harmful impact of the Nord Stream pipeline on the European gas market is intensified by the partial exemption granted to the OPAL (Ostsee-Pipeline-Anbindungsleitung) pipeline from the requirements of TPA (Third Party Access), or the takeover by Russian entities of key infrastructure in Europe, such as underground gas storage in the Czech Republic and Germany. For years Gazprom has also avoided the closure of the proceedings conducted by the European Commission regarding competition violations — thus delaying the change of its abusive practices.

In this context, one should look with great pride at the achievements of the last two years. First of all, we should point to the huge successes in completing the diversification of natural gas supplies to Poland and this part of Europe. A “game changer” (in the words of the Minister for Energy Security Piotr Naimski in the PiS government, who is responsible for the construction of the northern gas connection) will be the Baltic Pipe gas pipeline, which will allow Poland to receive ten billion cubic meters of gas annually. It is expected to be finished by 2022, i.e. by the time the gas supply contract with Russia expires. Analyses also confirm that, contrary to disinformation being spread, it is economically justified. At the same time, actions were taken to expand the Lech Kaczyński Gas Terminal, whose regasification capacity is to be increased to 2.5 billion cubic meters by 2021. In the LNG arena, Poland has not only developed cooperation with Qatar, but also as the first company in East-Central and Northern Europe, PGNiG signed a contract for LNG supplies from the USA, showing a complete change in the way that the company sees its role. The company, which for years has played the part of a local distributor for Gazprom, has recently become an entity ready to look for global opportunities and able to think innovatively, so as to provide solutions for Poland’s energy security, while allowing maximization of shareholder value. Implementation of diversification projects by the PiS governments since 2015 (such as expansion of the LNG terminal and construction of a gas connection with Norway) will lead to a situation where the expiration of the quasi-monopolistic, long-term contract with Gazprom after December 31, 2022, will allow Poland to become completely independent of Russian gas and become a gas hub for East-Central Europe. 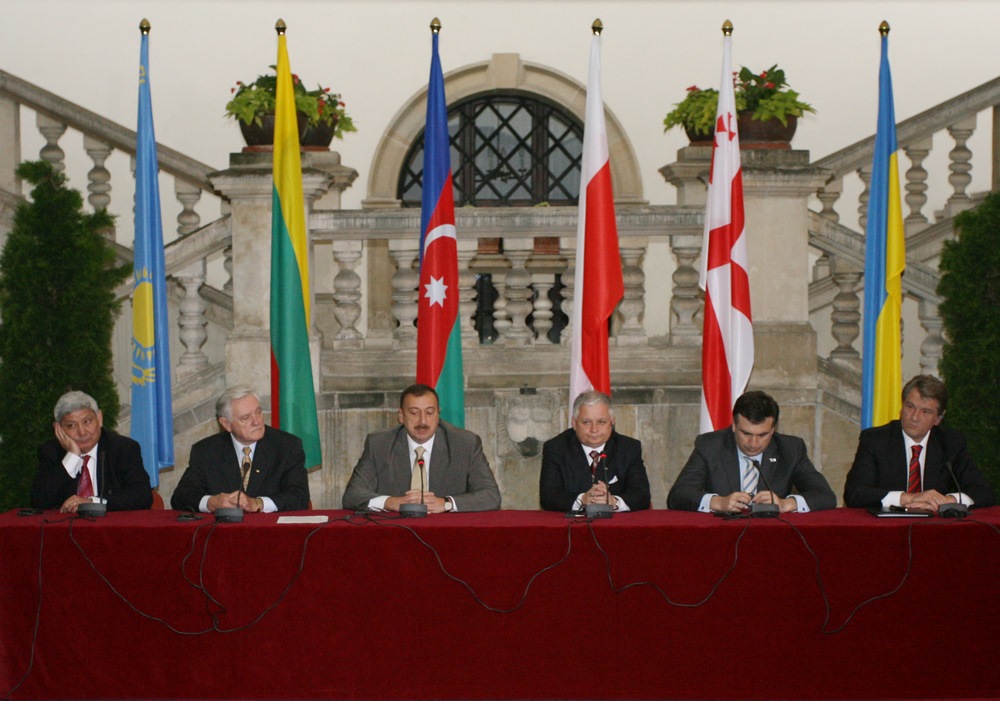 Thanks to the actions described above, for the first time in its history Poland will not only be able to search for the most stable and beneficial solutions for Polish customers, but also to start acting as a gas supplier to Polish allies. This philosophy was reflected in Poland’s plans. By the end of 2021, a gas pipeline connecting Poland and Lithuania (GIPL) is to be opened, which, together with the LNG terminal in Klaipeda, may be an alternative to Russia as a source of supply for the Baltic States. After the eventual conclusion of the Stork II project, linking Poland with the Czech Republic, our country will be on the route connecting the Baltic countries and Poland in the north, with Hungary and Croatia in the south. Cooperation with Ukraine has also been strengthened in recent years, and PGNiG sells this country over 700 million cubic meters of gas annually.

In the legal sphere, Poland is also now behaving in a more proactive way than ever before, vociferously expressing disagreement wherever Poland’s essential interests are at stake or where the law may be breached. With reference to Nord Stream 2, UOKiK (Office of Competition and Consumer Protection of Poland) has made an initial determination on its negative impact, examining its influence on competitiveness on the Polish gas market at the request of the consortium members involved in the project. In order to avoid further substantive assessment of the applicant’s project (i.e. companies tied to Gazprom, Uniper, ENGIE, OMV, Shell and Wintershall groups), they withdrew their application. However, UOKiK decided to continue to consistently defend competitiveness in the domestic market and, in view of the further involvement of these entities in the Nord Stream 2 project, launched precedent proceedings to impose a penalty, stating that the activities of Gazprom and its consortium members are trying to circumvent the law.

Poland also strongly protested against the idea of extending the exemption from the requirements of the TPA for the OPAL gas pipeline. This strategically harmful decision, contrary to EU law, is now being questioned before the EU and German courts. Poland and domestic companies have a clear position on matters concerning our interests, including in relation to the planned amendments to the Gas Directive. PGNiG is in a dispute with Gazprom over the way gas prices are shaped, which will — hopefully — deprive Gazprom of part of their illegally obtained advantages.

In summary, if the current direction of change is maintained, then in 2015–2022, the situation of Poland on the gas market will be completely different. In 2015, Poland bought gas almost exclusively from one source, a state with fundamentally hostile intentions towards Poland, and which has repeatedly showed that it is not a reliable supplier. In 2022, Poland will be able to obtain stable supplies from our allies, the US, Norway or Qatar. In 2015, the backbone of supplies was the Yamal gas pipeline, in 2022 Poland should have the Baltic Pipe and an expanded LNG terminal in Świnoujście, along with a network of interconnectors. In 2015, Poland’s voice in the international arena was muted, today Poland is able to assertively defend its rights and build coalitions with the Three Seas countries, with Ukraine, and with energy suppliers around the world. In 2010, Poland accepted a contract imposed on it by Russia, a contract with grossly excessive prices and unfavorable provisions for it. If the plans to expand the north-south gas infrastructure over the next four years are realized, this will not only never happen again, but most importantly, it will end Poland’s decades-long dependence on Russian gas supplies.

[1] Today, two-thirds of contracts signed by this company in Europe are indexed to prices in hubs or they contain a hybrid formula that is even more beneficial to the recipient.

[3] i.e. one year before the Ukrainian gas crisis and two years before the renegotiation of the contract with Russia.