Kulski: A Mayor for Difficult Times

In the most tragic period in the history of Warsaw — the German occupation, the capital city had its own hero, who is forgotten today, who showed great courage and dedication. It was thanks to Julian Spitosław Kulski that Warsaw still had its mayor, who after the arrest of Stefan Starzyński, for five years and until the outbreak of the Warsaw Uprising, continued his and Starzyński’s common vision and mission. 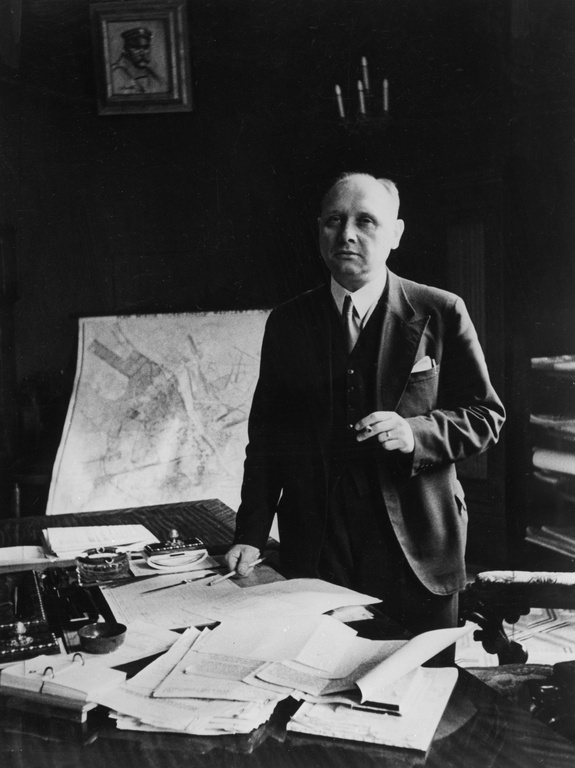 On September 1, 1939, the Second World War erupted. The first German bombs fell on the Polish capital, burying President Stefan Starzyński’s dream of a great Warsaw. When the Gestapo arrested him over a month later, his deputy, Julian Spitosław Kulski, took over the helm in Warsaw. Known today as the Mayor (Polish: Prezydent) of occupied Warsaw, he was recognized by the Polish government-in-exile and the Polish Underground State.

Though the Germans Saw Kulski as Mayor. Poles Invariably Addressed Him as “Mr. President”

On October 27, Julian S. Kulski received from the German occupation authorities “an offer he couldn’t refuse” — taking the position of custodial mayor of Warsaw. From then on, he would play a dual role — an administrator subject to the occupation authorities and a Polish mayor cooperating with the underground. He was supposed to operate at the junction point, under the supervision of Governor Ludwig Fisher himself, backed by his entire police and military apparatus. Finally, with the consent of the authorities of the Polish Underground State, the delegate of the Polish Government to Poland, Cyril Ratajski, and with the approval of the underground military authorities, General Michał Tokarzewski-Karaszewicz, commander of the Service for Poland’s Victory, Kulski embraced this position and fulfilled it until the first days of the Warsaw Uprising in August 1944. However, the Germans still only saw Julian S. Kulski as the mayor, while the Poles invariably referred to him as “Mr. President.” 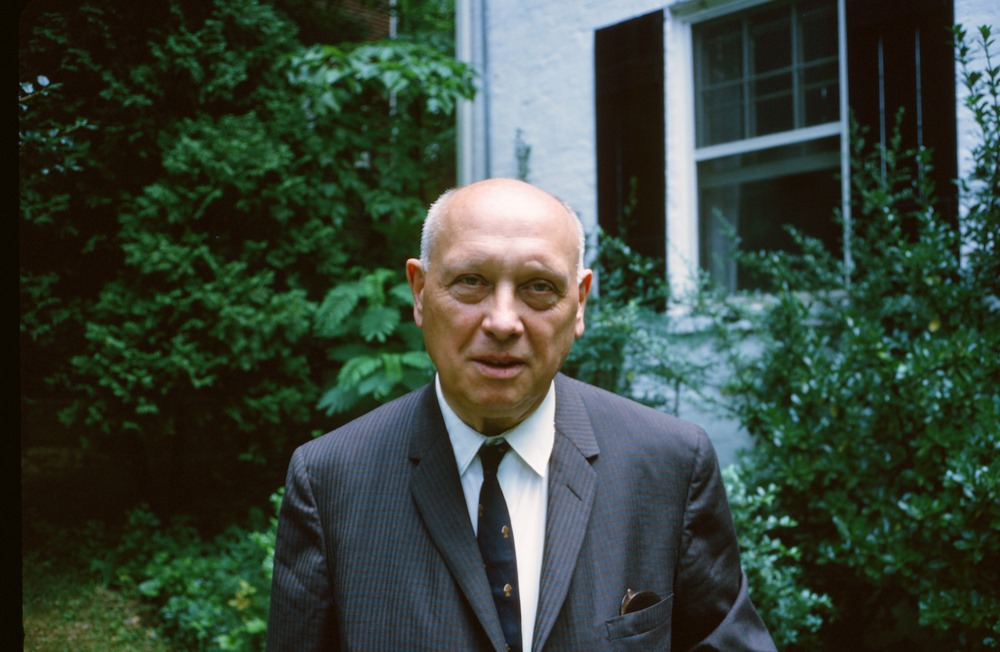 Julian S. Kulski during a visit to his son Julian in Washington D.C. They met 15 years after having been separated. Family archive.

The Polish Underground State, still treated Warsaw as the capital of Poland, and after the Germans took over the city, the administration and services had to continue normally. The key role in keeping “tight reins on Warsaw” was played by Kulski himself. He supervised the administration of individual districts, municipal enterprises (including transportation, the electrical power and gas plants) and services — including the fire brigade. It is not difficult to conclude that keeping these institutions in Polish hands and ensuring the proper course of action was of great importance, not only for the residents of the city, but it provided great opportunities for action and security for members of the underground. Thanks to Kulski, many members of the resistance had real or fictitious employment in the municipality. This guaranteed security against arrest during round-ups or from being deported to forced labor in Germany. Kulski was a soldier of the Legions of Józef Piłsudski, a recipient of the Virtuti Militari medal and an efficient leader of the administration. This was appreciated by the Commander-in-Chief of the Home Army himself, General Stefan Rowecki, who recognized that thanks to Kulski, they had a chance to preserve some control over substantive matters and decisions regarding the city in Polish hands. It meant maintaining a limited and constantly threatened, but still free from the direct actions of the Germans, breathing space in Warsaw.

The Preservation of Institutions in Polish Hands Gave Great Opportunities for Action and Security for Members of the Conspiracy.

Nearly 20,000 people were employed in the city structures at the peak of this period. Another 5,000 were fictitious jobs, created only for members of the underground or people sought by the Germans. Many false identities were thus obtained by Polish citizens of Jewish origin who were hidden from the Germans or escapees from the ghetto. Thus, “President” Julian S. Kulski and his family risked their lives on a daily basis. The Germans would not have had any difficulties arresting him if he was exposed. One of Kulski’s associates, Dr. Stanisław Lorentz, Director of the National Museum in Warsaw, wrote after the war: “My cooperation with Julian Kulski, who was a prisoner of the Warsaw City Hall for five years, could not have been better than it was. Julian Kulski is a righteous man, very intelligent and capable of quick decisions, full of talent for administration, he made cooperation under his guidance easy.” 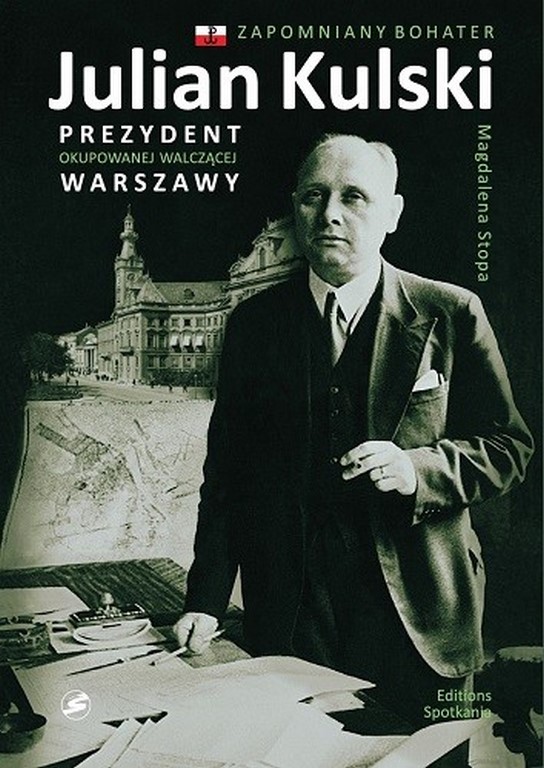 While in office in occupied Warsaw, “President” Julian S. Kulski experienced many dramatic moments — his arrest, interrogation at the Gestapo headquarters on Szucha Avenue, the arrest of his 14-year-old son and many associates (like Deputy Mayor Jan Pohorski, executed in the Palmiry Forest). The cooperation with the Jewish council of the Warsaw Ghetto at the time became very dramatic when, thanks to the occupiers, it gradually became a place of execution for hundreds of thousands of Jewish residents of Warsaw. 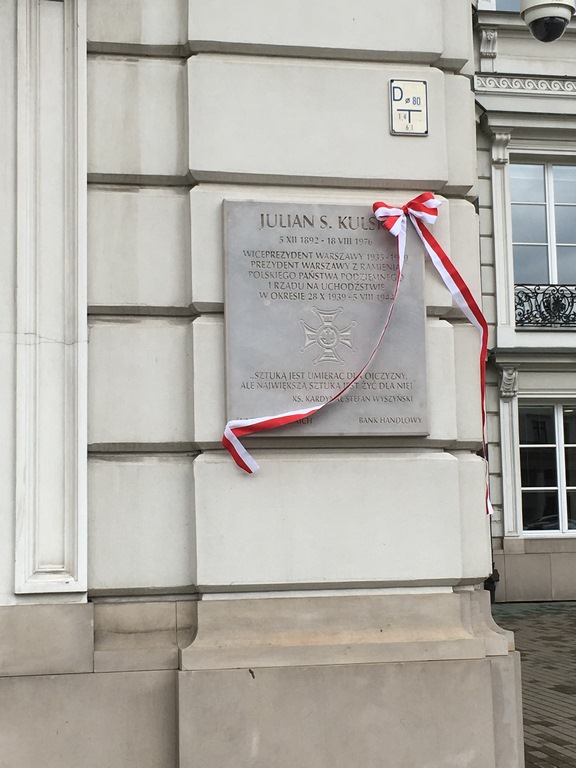 A plaque at the Jabłonowski Palace on Senatorska Street in Warsaw, the former city hall, unveiled in 2017 and dedicated to the heroic President Julian Kulski. Author: Marek Graniczkowski

On August 5, 1944, together with deputy Stanisław Podwiński, he submitted his resignation to Marcel Porowski, District Government Delegate for the Capital City of Warsaw. He spent a few weeks in the Old Town, and just before the capitulation of the district, he made it through the sewers to Żoliborz, where he lived and fought in the ranks of the Home Army’s “Reaper” assault company, with his fifteen-year-old son, Julian. After the fall of the Uprising, he shared the fate of thousands of civilians, passing through the transit camp in Pruszków. He managed to escape and reach his wife Eugenia and daughter Wanda in Baniocha near Warsaw. After the capitulation, his insurgent son was deported to a prisoner-of-war camp in Germany along with other Home Army troops.

After the Fall of the Uprising, He Shared the Fate of Thousands of Civilians, Passing Through a Transit Camp in Pruszków

After the war, despite many years of effort, the Mayor of Occupied Warsaw, as well as his associates, did not live to see their work given its due by the new authorities. The documents of the city council from the occupation period, hidden in the basement of the city hall, also disappeared under mysterious circumstances. From 1946, he was employed in the freight forwarding company C.H. Hartwig in Gdynia, then in 1947 in the Social Construction Company (BSR) in Warsaw, and then in the Workers’ Housing Development (ZOR). From 1960, then retired, he devoted himself to academic, historical and opposition activities. He died in Warsaw on August 18, 1976, and was buried in the Avenue of the Meritorious in Warsaw’s Powązki Cemetery.

Juliusz Spitosław Kulski’s service must not be forgotten. We have an obligation to restore his rightful place in history and to recall the role he played in building a free Poland. He is also a tragic figure in his own way — a man who became a “prisoner of the town hall”, surrounded by both the Gestapo and officers of the Home Army. For a man who sacrificed his entire life for Poland and its independence, it was undoubtedly terrible, hard and dilemma-filled work. However, he did not lose his “honorable ability”. Until the end he was faithful to his values and enjoyed great respect among his relatives. In closing, let us recall the words of the underground resistance fighter and “Courier from Warsaw” Jan Nowak Jeziorański: “During the occupation, the town hall became a stronghold of the Underground State. Without the heroic President Kulski, it would not have been possible to persevere until the end of the Uprising.”