Baltic Pipe – From Idea to Decision

A year ago, only a few people knew about the Baltic Pipe project, a pipeline that is supposed to constitute the gas connection between Poland and gas fields on the Norwegian continental shelf. In addition, the gas interconnector project was then in its concept phase. Today, the project is widely known to Polish society who is more and more eager to be in favour of the idea (according to a public opinion poll conducted in February 2018, 90% of Poles support the implementation of the project); moreover, the Baltic Pipe is advocated by the governments of Poland and Denmark. The capacity of the pipeline for 15 years has already been allocated as well as competent bodies have already started to issue permits essential for the construction of a the new gas corridor. It is crucial to trace how the project has developed from idea to decision over the last twelve months. It will be helpful to illustrate the project’s importance as well as to indicate its complexity. 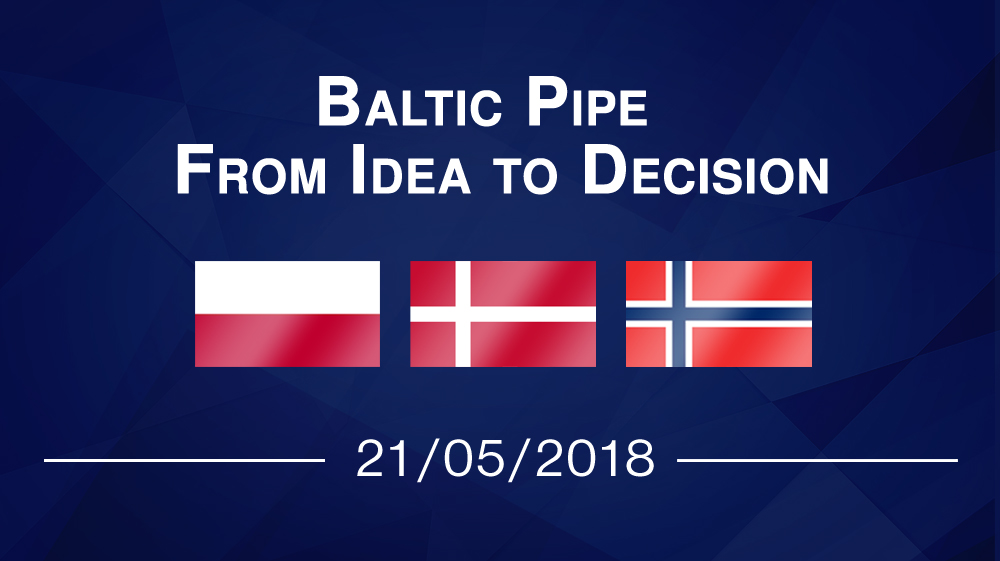 The Baltic Pipe gas interconnector constitutes an essential project implemented by the Polish government with the aim of improving the country’s energy security. Nearly three decades after the fall of communism, Poland is not fully sovereign in terms of ​​natural gas supply as about 70% of natural gas imported to the country comes from Russia. Given that the latter uses energy exports as a political tool, Polish recipients suffered numerous limitations in the supply of gas, which contributed to significant losses of key sectors of the Polish economy. Russia’s Gazprom takes advantage of its monopolistic position on the Polish gas market by shaping prices in a non-market way as well as by imposing terms of contracts that are contrary to EU legal regulations. The situation may be improved at the end of 2022, along with expiration of a long-term gas supply contract concluded between Polish Oil and Gas Company (PGNiG) and Gazprom, which has prevented Poland from diversifying its gas supplies for many years. In order to create the possibility of replacing the above-mentioned Russian gas with the one coming from a reliable partner, the Polish government decided to implement the Baltic Pipe project.

The investment carried out jointly by Polish (OGP Gas-System) and Danish (Energinet.dk) transmission system operators will enable to transport approximately 10 billion cubic meters of Norwegian gas per year, which stands for about 60% of Poland’s annual demand. It is also possible to further export gas to Central and Eastern Europe.

Denmark’s Energinet is responsible for the implementation of the first three components, while Poland’s Gaz-System is supposed to prepare the Offshore gas pipeline and to develop the Polish transmission system. The construction and operating costs of the gas compressor station in Denmark will be shared by both companies.

Investors will be additionally supported by Gassco, the important Norwegian partner, which is an operator of the integrated system for transporting gas from the Norwegian continental shelf to other European countries. 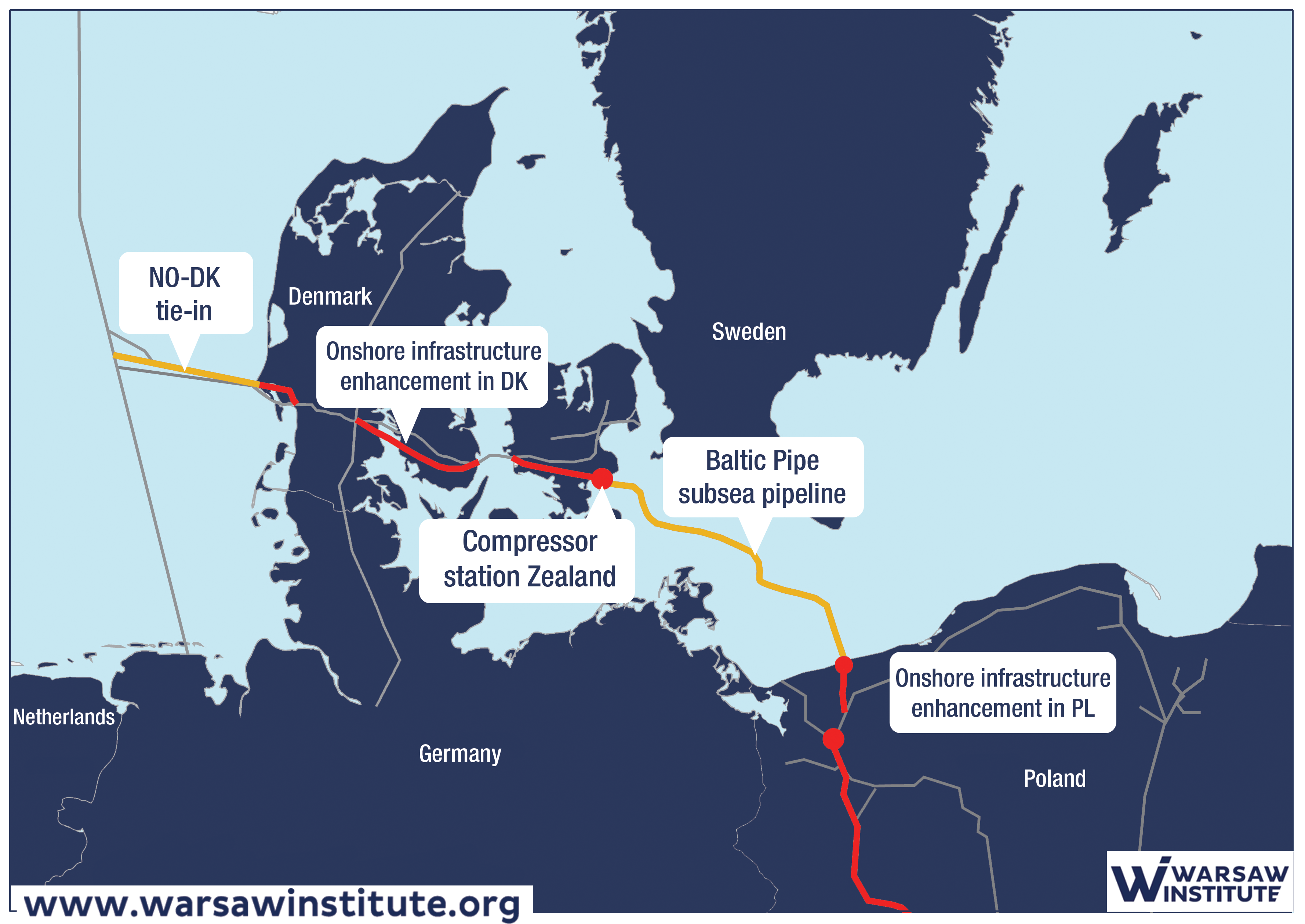 Two main routes of the Offshore gas pipeline are currently being considered; the northern variant crosses Danish, Swedish, Danish and Polish waters whereas the southern variant goes through Danish, German and Polish waters. The final routing of the pipeline will result from the decisions issued by the authorities responsible for the project’s environmental impact assessment; however, the option preferred by the investor will be signalled in the environmental impact assessment report. 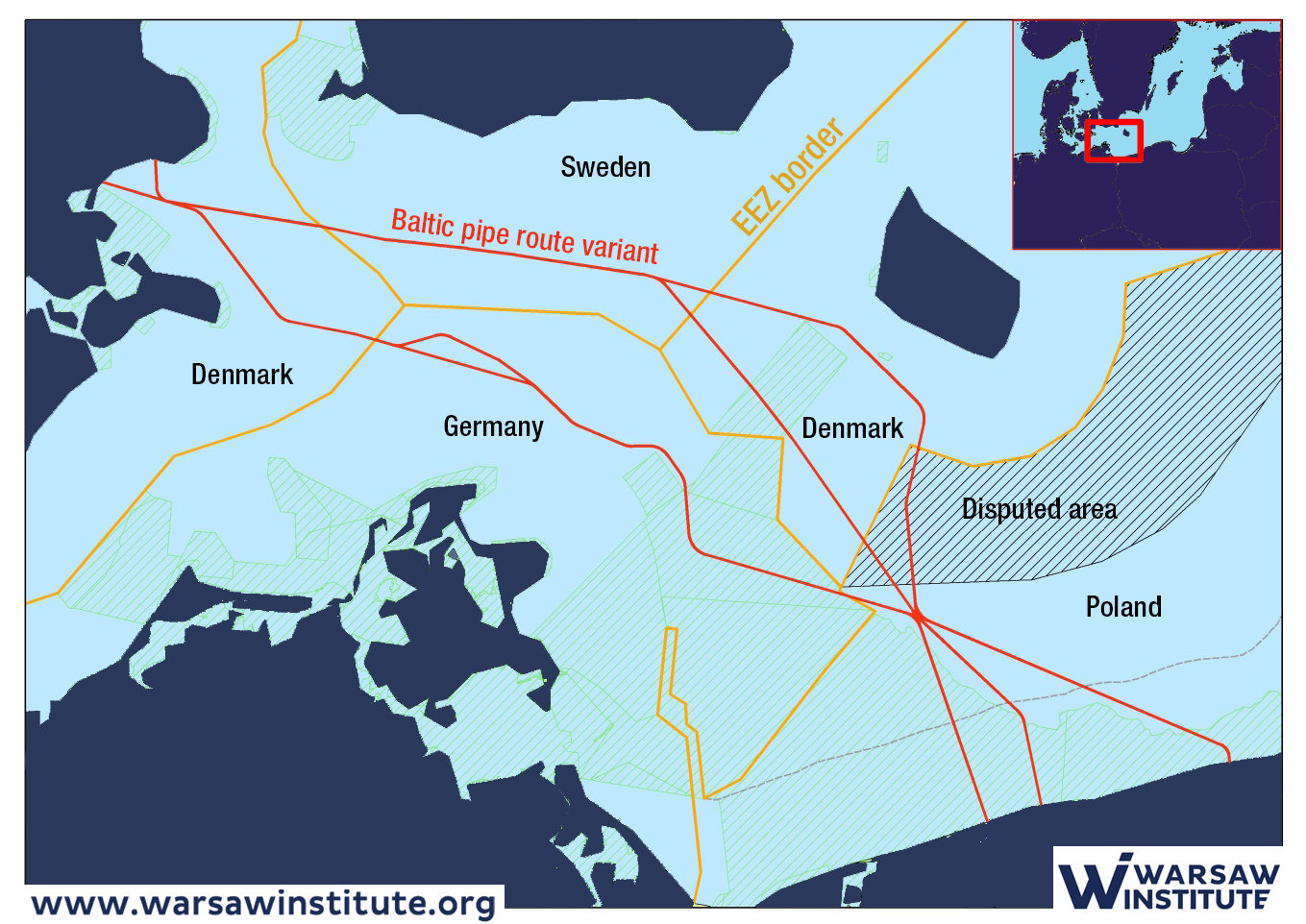 In order to implement the Baltic Pipe project, it is essential to provide a high level political support for the investment, primarily from Poland and Denmark. In June last year, the heads of Polish and Danish governments signed the memorandum on the Baltic Pipe investment project, in which they declared their support for investors in obtaining any permits necessary to start the construction of the gas pipeline as well as in establishing a legal framework for the project.

Due to the joint implementation of the project by Gaz-System and Energinet, it is necessary to regulate the principles of their cooperation. In June 2017, they were specified by a framework agreement that covers tasks during the first phase of the project (until obtainment of a building permit). In addition, both parties to the agreement managed to agree on some relevant provisions of the future construction agreement, which would include the division of any implementation costs. In this context, it needs to be mentioned that the latter have been estimated at 1.6 billion euros. The conclusion of the second agreement by the end of November 2018, will amount to taking the final decision on the project implementation.

The signing of the framework agreement by investors made it possible to launch the capacity allocation procedure (“Open Season”) whose main aim was to examine the demand for the pipeline’s capacity. Thanks to the fact that the market players had reserved the capacity of at least 7.5 billion cubic meters (as required by investors), the project can be implemented on a fast track. What is more, the regulatory authorities in Poland and Denmark carried out the so-called market test, which has confirmed the economic feasibility of the project. Finally, in January 2018, it was possible to sign binding transmission contracts between suppliers and investors for a period of 15 years (2022-2037). Furthermore, on the basis of the results of Open Season process, Energinet’s Supervisory Board has approved the business case for the Danish part of the Baltic Pipe project in March 2018 in order to submit an application for investment approval to the Danish Minister for Energy, Utilities and Climate.

Immediately after signing the framework agreement, Gaz-System proceeded to select the entity responsible for preparatory works on the Offshore gas pipeline. In August 2017, the company signed a contract with Ramboll Danmark A/S, whose task is to carry out necessary research, prepare the construction design and environmental impact assessment report as well as to obtain all permits necessary to start construction of the Offshore gas pipeline by April 2020. Another agreement was signed with an Australian company Subsea Engineering Associates Pty Ltd, which will be responsible for such issues as project supervision. Both companies have considerable experience in carrying out subsea infrastructure works.

In September last year, vessels contracted by Ramboll began cruising for environmental, geophysical and geotechnical surveys along the envisaged locations of the Offshore gas pipeline. Based on the experience of other submarine gas pipelines, the contractor decided to carry out a very wide range of research with the aim of taking into account all possible factors in the process of selecting the route and preparing the environmental impact assessment report and well as the construction design.

At the end of last year, the investor launched the process of obtaining decisions on environmental conditions, which is obligatory for the Offshore gas pipeline. At the same time, the Baltic Pipe transboundary impact assessment procedure was initiated in compliance with the provisions of the Espoo Convention.

The completion of the Offshore gas pipeline as well as the expansion of the Polish transmission system by 2022 are currently being discussed by a special governmental body for the Baltic Pipe project, established in November 2017.  The entity, represented by key ministers and other authorities responsible for granting permits, will be in charge of coordinating the activities of the Polish administration and the investor. Such a strategy will allow to conduct the decision-making process efficiently as well as it may lead to establishing a uniform practice for the authorities. The body is headed by Piotr Naimski, the Secretary of State in the Polish Chancellery of the Prime Minister and the Government Plenipotentiary for Strategic Energy Infrastructure. The fact that such an entity has been established proves that the investment constitutes a priority project for the Polish government.

The joint actions undertaken by Gaz-System and its contractor, supported by the Polish administration, mean that the project is currently being carried out in accordance with the schedule and all permits for the Offshore gas pipeline are to be obtained before April 2020.

Gaz-System is aware of the relevance of collecting opinions of interested organizations, institutions and community representatives at the earliest possible stage of the investment. Thanks to such an approach, it will be possible to take into account all issues discussed during the consultation in the process of the environmental impact assessment reports preparation, which should result in better quality of these documents. Therefore, a public consultation procedure was launched in Poland, Denmark, Germany and Sweden at the beginning of the year. Within the framework of its communication plan, Gaz-System intends to organize a series of public meetings, also with fishing organizations and local communities living near the planned landfall of the Offshore gas pipeline.

Support from the European Commission

The Baltic Pipe project has received a considerable support from the European Commission, already at the conceptual stage. The Offshore gas pipeline was recognised by the European Commission as a ‘Project of Common Interest’ (PCI), which means that the project brings significant benefits to at least two EU member states as well as contributes to market integration and competitiveness, increases supply security and reduces CO2 emissions. All PCI projects benefit from a number of improvements, including accelerated process of planning and permit granting as well as the right to apply for Connecting Europe Facility (CEF) funding. Thanks to the above-mentioned conditions, the Baltic Pipe project has already received financial support for the implementation of tasks in Poland and Denmark: in 2015, the gas interconnector was granted 0.4 million euro for preparatory works, whereas in 2017 it was subsidised with 33 million euro for design works.

In order to complete the investment in 2022, it is essential to establish a new legal framework for the construction and operation of the gas pipeline. In January 2018, the Government Plenipotentiary for Strategic Energy Infrastructure submitted a draft amendment to the special act on the gas transmission infrastructure, which streamlines the investment process. On the 2nd of May the draft was adopted by the Polish Government and put forward to the Parliament. Thanks to the proposed amendment, the act will cover all investments carried out by Gaz-System within the framework of the Baltic Pipe project, as well as gas interconnectors between Poland and neighbouring countries.

In 2017, Denmark fulfilled its obligations under the memorandum signed by the Prime Ministers of Poland and Denmark by amending the Danish Natural Gas Supply Act. As a result, Gaz-System will be able to become an owner of the transmission pipeline located in the territory of Denmark (according to the agreement concluded between Gaz-System and Energinet, the former will own the Offshore gas pipeline infrastructure up to the first dry weld in Denmark).

Year 2018 will be crucial for the implementation of the investment. This year, environmental, geophysical and geotechnical studies of the Offshore gas pipeline should be completed. They will enable Gaz-System to submit all applications that are necessary to start the construction of the gas pipeline, namely an environmental impact assessment report and a construction design.

Investors are expected to take a final investment decision by the end of November. It will amount to their commitment to build the Baltic Pipe project. From that moment on, any resignation from the project will result in considerable financial penalties for the withdrawing party.

The above-mentioned activities constitute only a part of all tasks undertaken to implement the Baltic Pipe project by 2022. It is a key element of the policy of diversifying sources of gas supplies to Poland and is a priority for both Gaz-System and the Polish government. Such an approach is necessary due to the complexity of the project as well as a relatively tight schedule. We hope that next year we will provide our readers with equally good news about the progress of this strategic investment.