The Three Seas Initiative, China, Russia, Nord Stream 2, NATO and the EU – interview with the Polish Ambassador to the United States.

On March 18, 2021, the Warsaw Institute, together with The Warsaw Institute Review quarterly, had the honor of hosting another online event within the Diplomacy Talks Series. The title of the discussion, moderated by the president of the Warsaw Institute – Tomasz Kijewski, was “American policy during Biden’s presidency. Opportunities and Challenges for Poland and Central Europe.” Ambassador Piotr Wilczek presented his analysis and assessments of the impact of the new US administration on relations with Poland and Europe.

The guest emphasized that President Biden’s team pays special attention to the importance of NATO, the European Union and transatlantic relations. In the latest “preliminary” White House strategic policy report, the new administration made it clear that Europe and the Indo-Pacific region were priorities for US policy. In addition, Joe Biden emphasizes the importance of alliances as crucial to the stable development of the United States. This is an example of America’s return to active involvement in international structures and the policy of multilateralism. Due to its size and economic potential, Poland has a chance to benefit from such a diplomatic strategy of a global giant. Ambassador noted that in a similar strategic report the previous US administration identified China and Russia as its main rivals, but President Trump focused on Beijing as the main threat to US stability and the overall order in the West. In a preliminary review of the national security strategy, the White House showed its intention to focus even more on the threats from China. The perception of Europe in the US will therefore result from the possibility of mutually beneficial cooperation, and the concepts of far-reaching strategic autonomy of the EU cause anxiety in the Biden administration and other NATO members. According to American strategists and diplomats, conducting a global defense policy is possible only thanks to the Alliance.

Moreover, professor Wilczek drew attention to the progressive cooperation between Poland and the US in the field of defense, which was tightened during the Obama presidency and continued by the Trump administration. Biden’s team is also signaling its intent to continue this policy. The increased presence of US troops in Poland enjoys bipartisan support in the Congress, which has a significant impact on defense policy due to its power to divide public budget. The same is true of the Nord Stream 2 energy project, which both democrats and republicans consider harmful to the security of Europe and the autonomy of Ukraine. It would be rational for Poland and the region to further reduce the dependence on eastern supplies of energy resources and replace it with alternative supply routes in the form of the Baltic Pipe or American LNG.

The Three Seas Initiative as a geopolitical project with the potential to strengthen European integration, transatlantic cooperation and the security of NATO’s eastern flank also enjoys support from Americans beyond political divisions. Ambassador Wilczek emphasized that the Three Seas has not only a political but also an economic dimension, and the prosperity in this region is crucial for the strategic goals of the US. The financial support of this initiative by the United States will contribute to closer cooperation not only with the countries directly involved in 3SI, but also with the entire European Union.

We encourage you to watch the full interview! 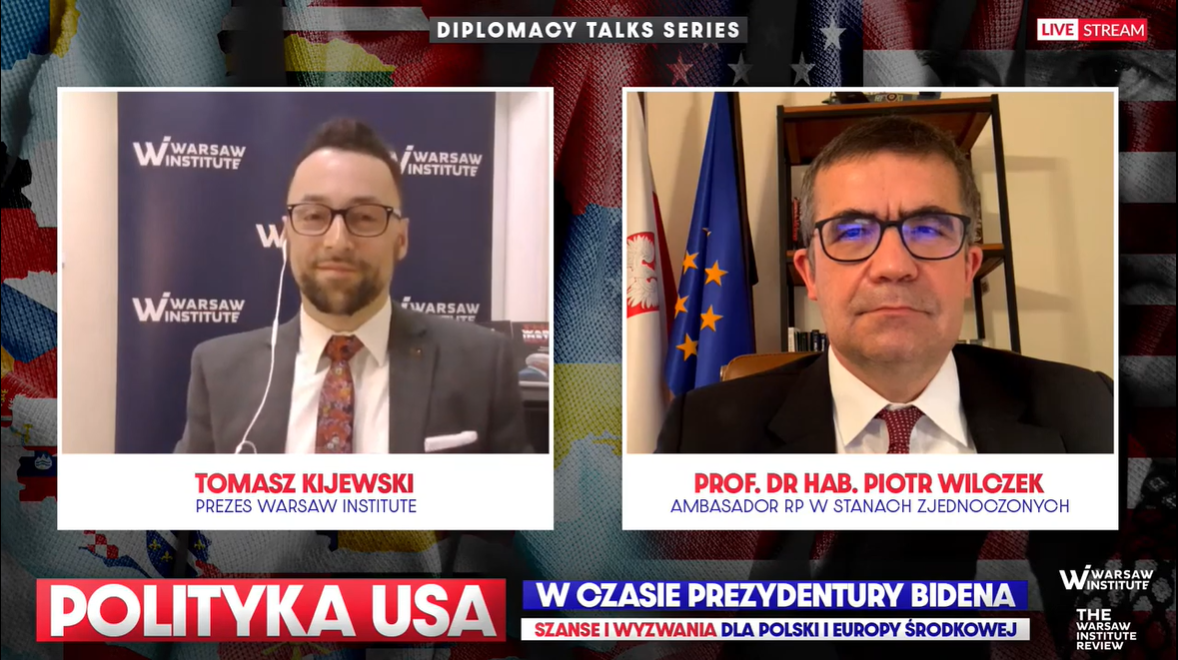