Russian media misinform that school children in Ukraine will have to speak only in Ukrainian, even during breaks

Russian media are spreading the news that Ukrainian president Petro Poroshenko demanded that school pupils use Ukrainian at school, even during breaks. In reality, on September 28 Poroshenko appealed to teachers to enhance prestige of the state language not only during classes but also in communication with children. 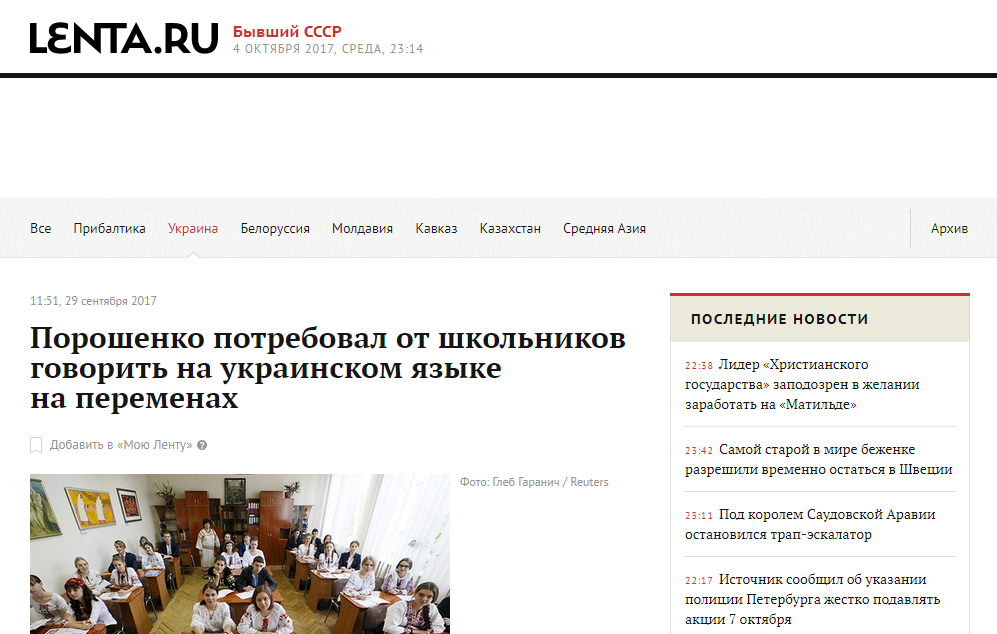 According to Ukrainian UNIAN agency, at a meeting with educational staff in Kiev, Poroshenko underlined that “each child who graduates from a Ukrainian school must have a good command of the Ukrainian language”. He also appealed to teachers to show their students that the Ukrainian language (…) is not a dry rule of law but a living means of everyday communication. “Signing the laws supporting our Ukrainian language I will ensure that there remains a wide space for the free use of other languages spoken by Ukrainian citizens” – underlined the president. In the meantime, Russian TV station “Channel 5” headlined its coverage of the event: “Not a word in Russian. Poroshenko ordered school pupils to use Ukrainian, even during school breaks”. The lenta.ru website reported the situation in a similar spirit. 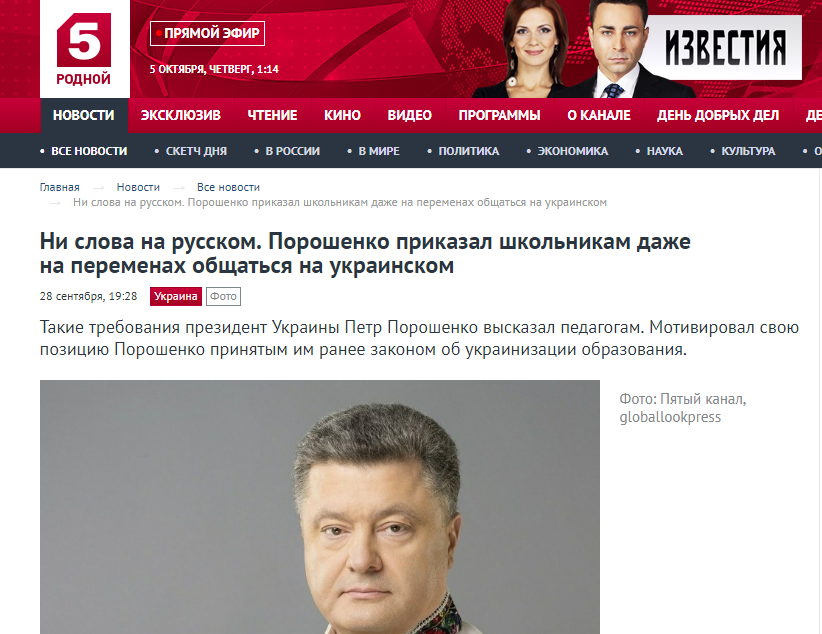 Website of Russian “Channel 5” [http://www.5-tv.ru/], Access: 10/05/2017, Russian TV station “Channel 5” informs that Ukrainian President Petro Poroshenko ordered school pupils to use Ukrainian, even during school breaks. The headline starts with the following sentence: “Not a word in Russian.”

On September 28, a new law on education entered into force. It provides for 12 years of compulsory schooling and for strengthening Ukrainian as the language of school instruction. The law met with criticism of some countries neighboring with Ukraine; it was also criticized by Moscow. Ukrainian education minister of education Lilia Hrynewych assured that the new law does not deprive minorities of the right to education in their native language. She pointed out that the law gives minorities the right to study their languages, adding however, that representatives of the minorities living in Ukraine should be fluent in the Ukrainian language.