The leader of the “Ukrainian community” of the occupied Crimea has once again attacked Ukraine.

The Russian agency RIA Novosti has quoted the acting president of the organization “Ukrainian Community of Crimea”, Anastasia Gridchina, according to whom, “Kiev invents cases of human rights violations in Crimea instead of dealing with the country’s problems”. In her opinion, the Ukrainian authorities are trying to destabilize the situation on the peninsula. She also advised Ukraine not to enter another state’s territory with “its samovar”. 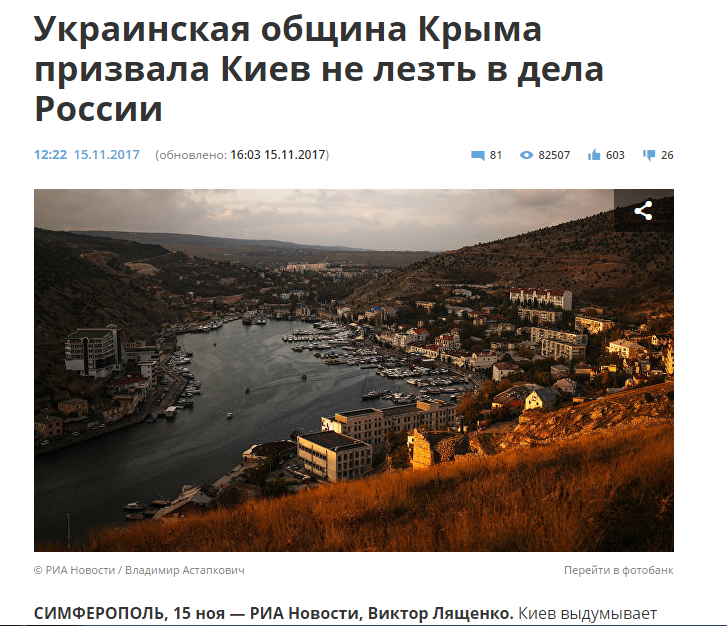 RIA Novosti Agency website [https://ria.ru/], access: 11/16/2017. The agency has informed that the Ukrainian community of Crimea had appealed to Kiev to interfere in Russia’s affairs.

“Ukraine still has the gall to dictate to another country, that is Russia, how to conduct politics on its own territory. We are very sorry for all the innocent people living in Ukraine who have to struggle with poverty, unemployment and humiliation”, she said. This is not the first such statement by the activist. During an interview for a local television of Simferopol, she asserted that “the rights of the Ukrainians living in the Crimea are respected”, which is not the case on Ukraine’s territory. At the same time, she said that some information on the near-complete disappearance of Ukrainian language and culture on the peninsula constitutes “a lie of the Ukrainian authorities.”

The organization “Ukrainian Community of Crimea” was set up by the Russian occupation authorities in March 2016. It was headed by Oleg Usik, chairman of the United Russia Party in the village of Donetske. His then deputy, Anastasia Grinchina, is also an activist of the United Russia and the head of the executive apparatus of the Crimean branch of Young Guard of United Russia. It should be added that Usik used to describe himself as a Russian whereas Grinchina was not a person who would be known in the environment of the Ukrainians living in the Crimea.

It seems that the decision of the Russian authorities to establish an organization that would speak on behalf of the Ukrainian people in Crimea constituted an attempt to end up with the critique of the Kremlin for the persecution of the Ukrainians and Crimean Tatars on the occupied peninsula. It is not a coincidence that this is the task of the activists of the United Russia, namely the party being Vladimir Putin’s political background. Undoubtedly, it was all about loyalty and devotion of its enthusiasts. One should expect that the organization would be still used by the media to assure the public opinion about the peaceful life of the Crimean Ukrainians wishing to live in Russia, as well as to attack the Ukrainian authorities.