The Kremlin’s political project “Viktor Medvedchuk” is becoming more and more realistic. Journalists of the Radio Svoboda claim that the pro-Russian oligarch who is preparing himself for the election to the Verkhovna Rada of Ukraine, and possibly for the presidential election as well, bought the “112 Ukraine” TV station. 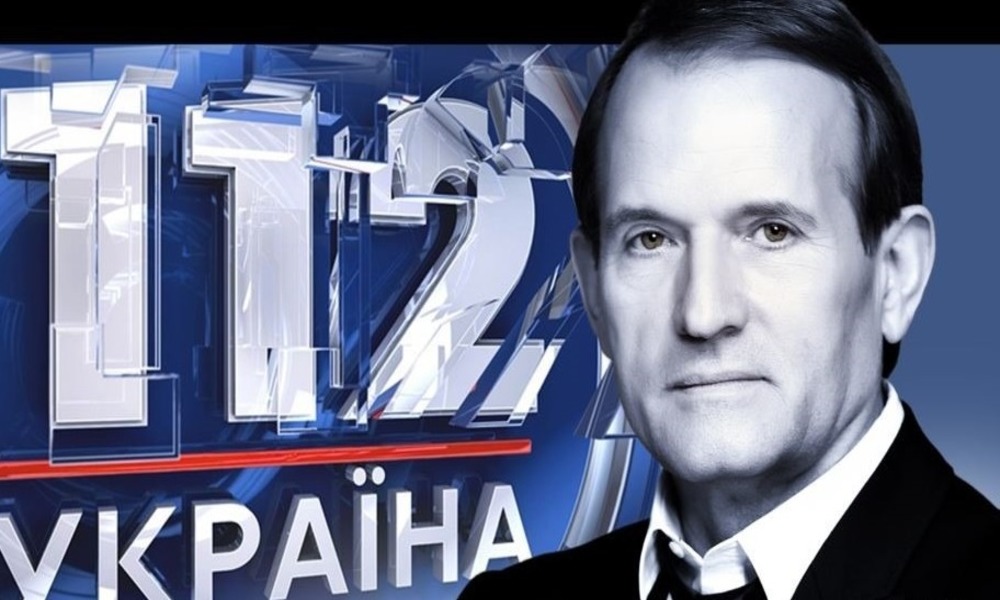 “112 Ukraine” TV station has been established just before the Euromaidan. It was founded by a close co-worker of Viktor Yanukovych, the then Minister of Internal Affairs Vitaliy Zakharchenko, who just as his employer defected to Russia. In April 2018, the station was bought by a Swiss „Plirofories” incorporated company. It is owned by a German, Edward Katz, who is also in possession of the “Exclusive Cars Katz” used-car dealer in Künzell village in Hesse. A new owner gave the responsibilities of the station’s producer to Artem Marchevsky, a co-worker of Medvedchuk. Since then, according to the journalists from the Radio Svoboda who reliably document their thesis, the station has been publishing information and programmes about Medvedchuk.

After the broadcast about relations between Medvedchuk and “112 Ukraine” station in the Radio Svoboda, the leadership of the station suddenly terminated the cooperation contract with the Radio. A program “Donbass. Realities” describing the course of the war in eastern Ukraine, which was being prepared by radio journalists, disappeared from the TV station.

This is not the first media scandal involving Medvedchuk this year. Producers of a documentary about the Ukrainian poet Vasyl Stus, the last political prisoner of the Soviet Union, who died in unexplained circumstances in the Soviet labour camp, were forced by Medvedchuk’s lawyers to remove a part of the film in which, as he himself claims, he is presented in a false light.

At the beginning of 80’s, Medvedchuk, a Soviet lawyer, counsel and agent at the same time, was a public defender of Vasyl Stus, accused of anti-Soviet activities. According to the stenographic record of the trial, he supported the prosecutor instead of his client. When Ukraine became free, he explained that he had to obey the rules of the game and the poet violated the law of that time.

Oksana Marchenko, a star of the state television in the times of Leonid Kuchma’s presidency and wife of the candidate for the Verkhovna Rada or probably even for the position of the President of Ukraine, tries to improve the image of Medvedchuk. She convinced the producers of “Dancing with the Stars” programme in the “1+1” TV station that she was the perfect candidate for this programme. Her admission to the program evoked protests of the station’s employees who remember her participation in Kuchma’s policy promotion, as well as the participation of her husband in the Stus’ trial and his support for the Kremlin during the war with Ukraine.

Vladimir Putin, the President of the Russian Federation is a godfather of Medvedchuk’s daughter, and wife of the Russian PM Dmitry Medvedev is her godmother. In his political activity Medvedchuk, included to the Ukrainian delegation for Minsk negotiations at the request of Putin and with the support of the Chancellor of Germany Angela Merkel, claims that there is a civil war in Ukraine. Not Russian aggression, but a civil war. He is a supporter of federalisation of Ukraine and a critic of its authorities and policy of the West, especially of the United States. Protests of the employees of the “1+1” station, which is connected with the environment of the President of Ukraine Petro Poroshenko did not bring expected results: Oksana Marchenko has returned to television and promotes her ambitious husband.

Scandals in media promote Medvedchuk as a candidate. Public opinion wonder if he has a right to run for election, what his program is and what his chances are? What is his role in Ukraine? His supporter, Vladimir Putin, repeated several times that he had nothing to talk about with current authorities of Ukraine, and that their usurping mandate received as a result of the fascist, Banderite coup d’état was a history.

Putin really counts on new elections to the Verkhovna Rada and the presidential election in Ukraine. Russia will take part in them for sure: on the Internet, in television, especially the Russian speaking one, surrounding Ukraine and already presenting Medvedchuk as a representative of the reasonable, kind to Russia Ukraine. The influence on the democratic, with all its disadvantages and abandonments, electoral process in Ukraine is a subsequent anti-Ukrainian front prepared by the Kremlin. If they manage to place Medvedchuk in the Verkhovna Rada, in the official Ukrainian politics, they will gain additional tools of exerting pressure on the internal and external policy of Ukraine. Even now the position of Medvedchuk is unique: he has a Putin’s phone number. Such a phone call can result in, for example, the release of Ukrainians from Russian prisons. He has already used this possibility once.

Putin yearns for the Ukraine of Yanukovych, obedient and submissive. In politics, nothing happens twice, and this is why the role of Viktor Medvedchuk is extremely difficult. He again is the counsel of the prosecutor.