A Treaty on Friendship. The End of Fiction

President Petro Poroshenko ordered the Ministry of Foreign Affairs of Ukraine to prepare a withdrawal from the Treaty on Friendship, Cooperation, and Partnership between Russia and Ukraine signed in 1997. Ukrainian and international experts agree that after the annexation of Crimea and Russian aggression in Donbas the Treaty is “dead”. They wonder, however, if it would not be more profitable to keep up the agreement and use it in proceedings against Russia in the international courts. 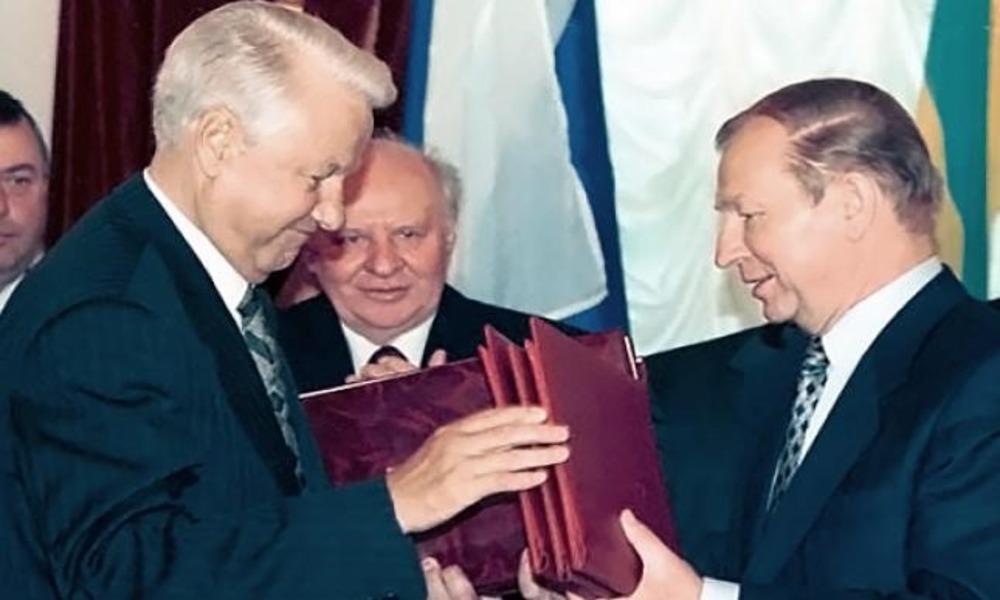 The treaty between Ukraine and the Russian Federation which provides for the strategic partnership and guarantees the inviolability of common borders, respect for territorial integrity of the partner and mutually forbids the use of their own territories to undertake activities which would undermine the security of the neighbour has been signed on March 31, 1997, in Kiev by the then presidents of Ukraine and Russia, Leonid Kuchma and Boris Yeltsin.

Negotiations on the content of the agreement lasted 5 years. The status of Crimea, the future of the Black Sea Fleet’s bases, the date of the delimitation of the border and the status of the Sea of Azov were the matters of the dispute. Russia tried to hold a stronger position in the agreement and to have an influence on the internal and external policy of Ukraine. Even though the compromise text was approved, Russia was delaying the ratification for a year: they made it dependent on signing the agreement allowing their fleet to station in Crimea. Despite the ratification of the Treaty, the delimitation of the border was not conducted. According to the particular point in the agreement, it is being prolonged every ten years, unless one of the parties decides to withdraw. In this mode, it has been prolonged in 2008. This year, both parties have time to make a decision until the end of September 2018.

Both parties launched initiatives to withdraw from the agreement. Russian members of the State Duma claim that since 2014 and the Revolution of Dignity in Ukraine, Ukraine was not fulfilling the duties of a strategic partner, was discriminating Russians and the Russian language, lost Crimea through their own fault and started a civil war – which in fact led to the cancellation of the joint contract. Russian deputies claim that a formal declaration that the Treaty is invalid would enable further actions of the Kremlin and would finally close the case of Crimea. However, Russia did not make such a step as it realises that in the light of facts and the international law it would be a manoeuvre too far from the “Russian standards”.

Ukrainian proposals to declare the treaty on friendship and strategic partnership invalid were based on different premises. Russia infringed all the most important points of the agreement. It violated the borders of Ukraine, annexed Crimea, it is supporting separatists and conducting a hybrid warfare – as a result of which about 10 thousand people died and Donbas suffers a humanitarian and ecological disaster. Today, the treaty between Russia and Ukraine is only on paper. But it still exists. And Ukraine uses it as a base for proceedings against Russia in the international courts.

For instance, Ukrainian entrepreneurs expropriated from Crimea referred to the agreement. In the Court of Arbitration in The Hague they tried to prove that by ordering expropriation, officially called “nationalisation”, Russia broke the rules of the Treaty guaranteeing a mutual protection of investments. But so far, Ukraine has not gained much in the international courts and tribunals. Therefore, the argument to keep this destroyed by Russia act is becoming weaker.

The President Poroshenko’s order for the Ministry of Foreign Affairs to prepare the withdrawal from the Treaty is based on two premises. The first one is political and is connected with the presidential campaign (presidential elections in Ukraine are scheduled for March 2019). It is a strong political sign for his proponents and competitors which is very much related to other actions: the struggles for the autocephaly of the Ukrainian Orthodox Church, proposals to include paragraphs about the integration with the European Union and joining NATO into the Constitution. This is also a clear sign for Russia which plays the game aiming for the choice of a pro-Russian president to repeat the case with Yanukovych.

The second premise is even more important. Russian aggression and its policy made Ukraine a different country than it was in 1997 or 2014. This needs a new definition of relations with Russia. Today, it is difficult to imagine negotiations on a new treaty on friendship. This is a new historical moment, “zero” option: we can make a new agreement, try to define our relations, on condition that you give back Crimea, retreat from Donbas and pay for this pointless war. In this sense, the proposal of Poroshenko is an offer for Russia and a way to come back to the ground of the international law.