The building from the bird’s eye view has the shape of the letter C from the Ukrainian alphabet, C as “Слово”; in Polish – “słowo” (in English – word). Hence the title of the documentary about it “Slovo House”. The building is still in Kharkiv, it was built in the 1930s for Soviet writers, poets, and cultural activists. For those times it was comfortable, equipped with bathrooms, central heating, telephones. The creators had their own studios. For many of them, it was the last address. 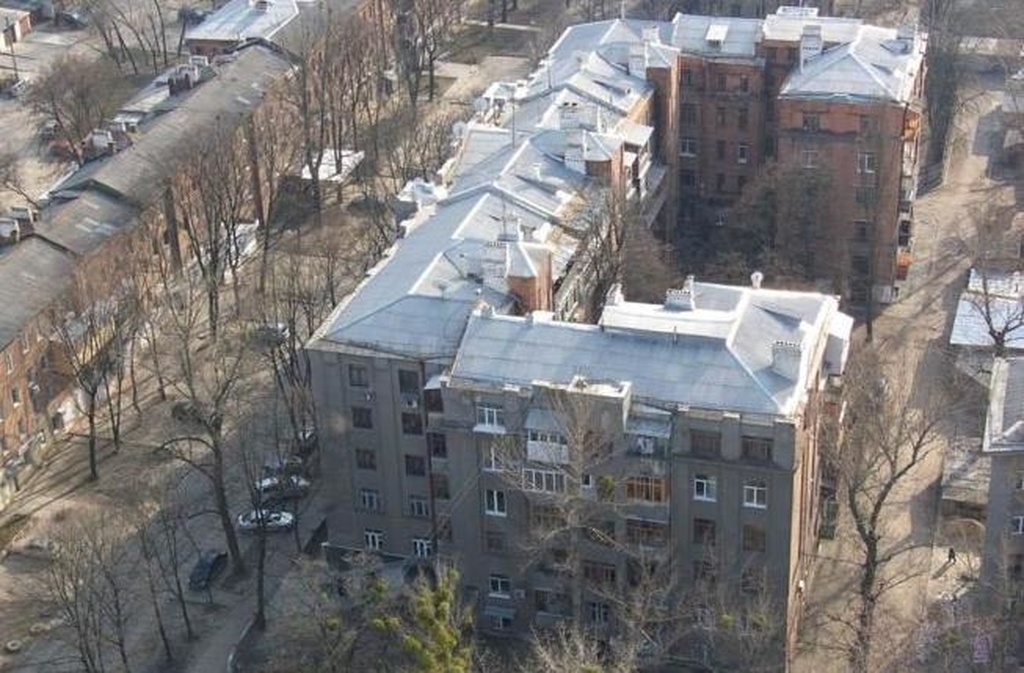 The documentary “Slovo house” directed by Taras Tomenka (ukr. Тарас Томекко) was recognized in 2018 as the best documentary film in Ukraine. Its premiere took place in Kharkiv, the first foreign viewing was in Warsaw. With the support of Ukrainian diplomatic establishments, the film is now being shown in many different places in the world and is a showcase of Ukrainian historical and cultural diplomacy. It tells the story of the inhabitants of the house. In a quite specific way.
For his narrative the director used fragments of literary works of former residents, their diaries; but mainly – archival documents of the NKVD, the Soviet political police, denunciations that they wrote to each other, reports of telephone tapping and reports of their interrogations, usually the last written traces of their lives. The viewer has the opportunity to get to know the everyday atmosphere of this, as it turns out, extremely ghastly home. The climate created from the nightmarish recesses of the human soul guided by fear. The story begins with the idea of supporting talented people who serve the idea of social justice and freedom, declared by the state authorities. It is accompanied by the joy of the inhabitants of the new home: it is an amazing social advancement, unique status, and great prospects.

The price that most of them paid for this infatuation of the house for the chosen ones and the communist myth, for the place in the new hierarchy, turned out to be definitely too high. They paid for their choice with their lives. Mykola Khvylovy (ukr. Микола Хвильовий), a Ukrainian writer who saw Ukrainian literature and culture surrounded by separate national European cultures, committed suicide under the influence of atmosphere at home. He chose death by his own hand. Today he is one of the symbols of the “Slovo House”.

While Khylovy is a symbolic figure for the inhabitants of the house, this drop in which you can see the fate of his friends, acquaintances, and enemies – most of them died tragically in the NKVD prisons in Solowki, Siberia – this house’s history belongs to the history of “Executed Renaissance”. The term is used to describe the generation of Ukrainian artists and scientists operating in the 1920s and early 1930s in the territory of the Ukrainian Soviet Socialist Republic; the first capital of the Republic was in Kharkiv. Most of the representatives of this generation were arrested and murdered by the NKVD in the 1930s. The term “Executed Renaissance” was introduced to the scientific and journalistic life by an émigré Ukrainian literary scholar Yuriy Lavrynenko (ukr. Юрій Лавриненко) in 1959 in the pages of “Paris Culture”, edited by the Polish emigrant Jerzy Giedroyc.

The Stalinist system was ruthless against intelligentsia, peasants, freedom and private property. For many years, this story was a taboo. It was guarded not only by the political police of the Soviet Union. Its guards were also the writers, journalists, teachers, in other words, the Soviet intelligentsia. In the time of independence, after 1991, knowledge of Soviet crimes, including the largest one, Holodomor, very slowly broke into the official Ukrainian life. After Revolution of Dignity, the situation changed significantly. Ukrainians, like the citizens of many other countries in Central and Eastern Europe, have participated in the accelerated process of learning about their own history. It is very difficult because they were subject to communist indoctrination for over seventy years. The Ukrainian authorities are implementing the program of de-communization of the state, public space and the most important – de-communization of historical memory. In this context, the “Slovo House” is a very important voice in the conversation about the essence of the Soviet system and the Ukrainian experience with communism.

Ukrainian historical culture is multithreaded. Various historical codes related to events, leaders or processes exist in Ukraine’s historical culture side by side, compete and fight with each other. Attempts to reduce it, for example to the regional Galician code of Bandera, which is specialized in Russia supported in this Orwellian operation by some of the European right-wing parties, belong to the category of intellectual and political crimes. In 2018, Ukraine celebrates the 100th anniversary of regaining independence. During state celebrations, their organizers pay special attention to the republican and liberal threads of the struggle for independence, especially with Russia. And in this context, the Ukrainian-Russian history of the Kharkiv “Slovo House” is a good starting point for the revision of the myth about brotherhood in “Russkiy Mir”(„Russian World”; rus. „Русский Мир”).