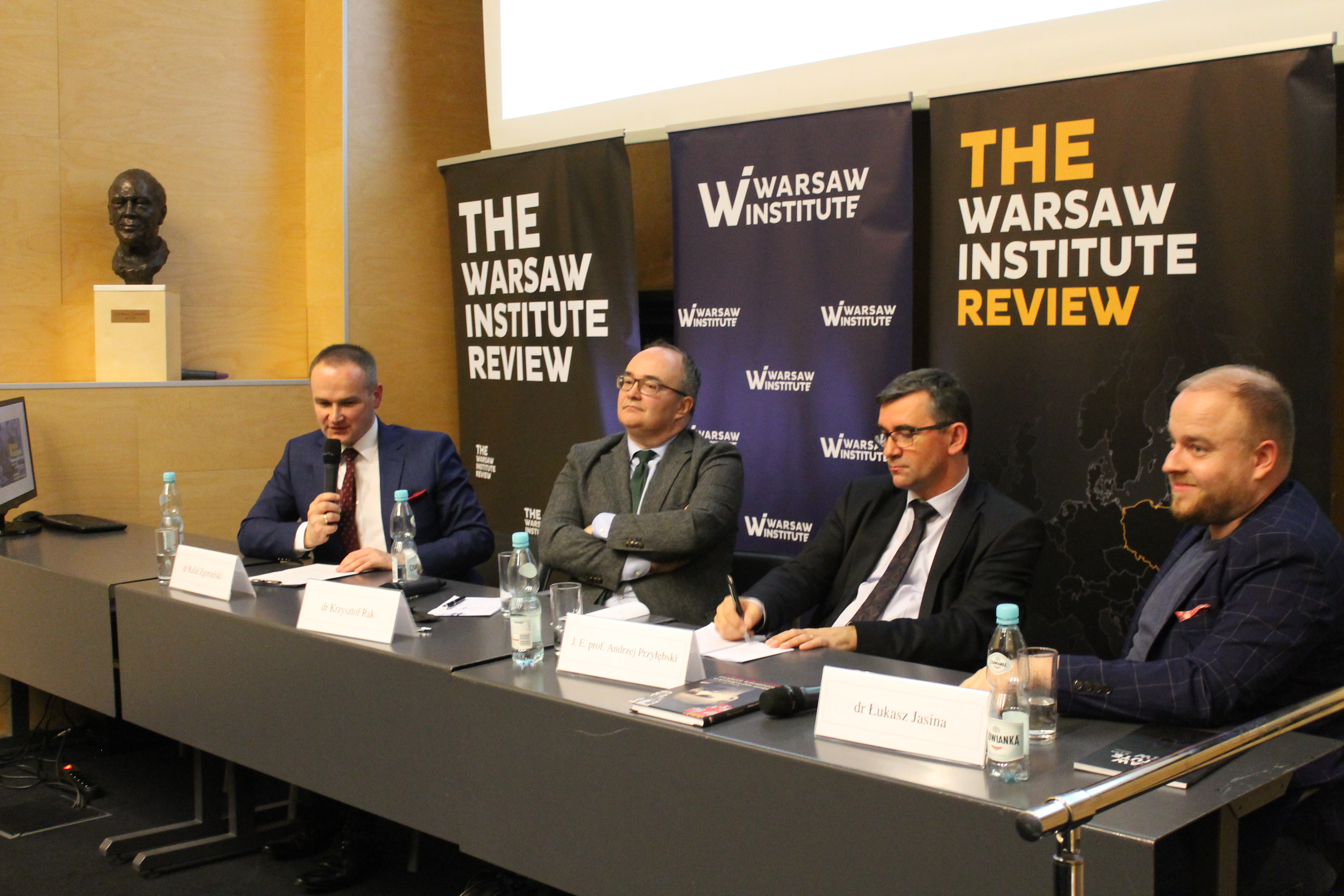 Historical politics creates a tension between history and what it can be used for. The concept of truth goes to the background and gives way to the interests of states – said the Ambassador of Poland in Germany prof. Andrzej Przyłębski in his opening speech. The main topic of the expert debate was the current historical policy of Poland, Germany and Russia. The gathered analysts raised the topic of the current international situation and its impact on policy making and historical research, as well as today’s public awareness. 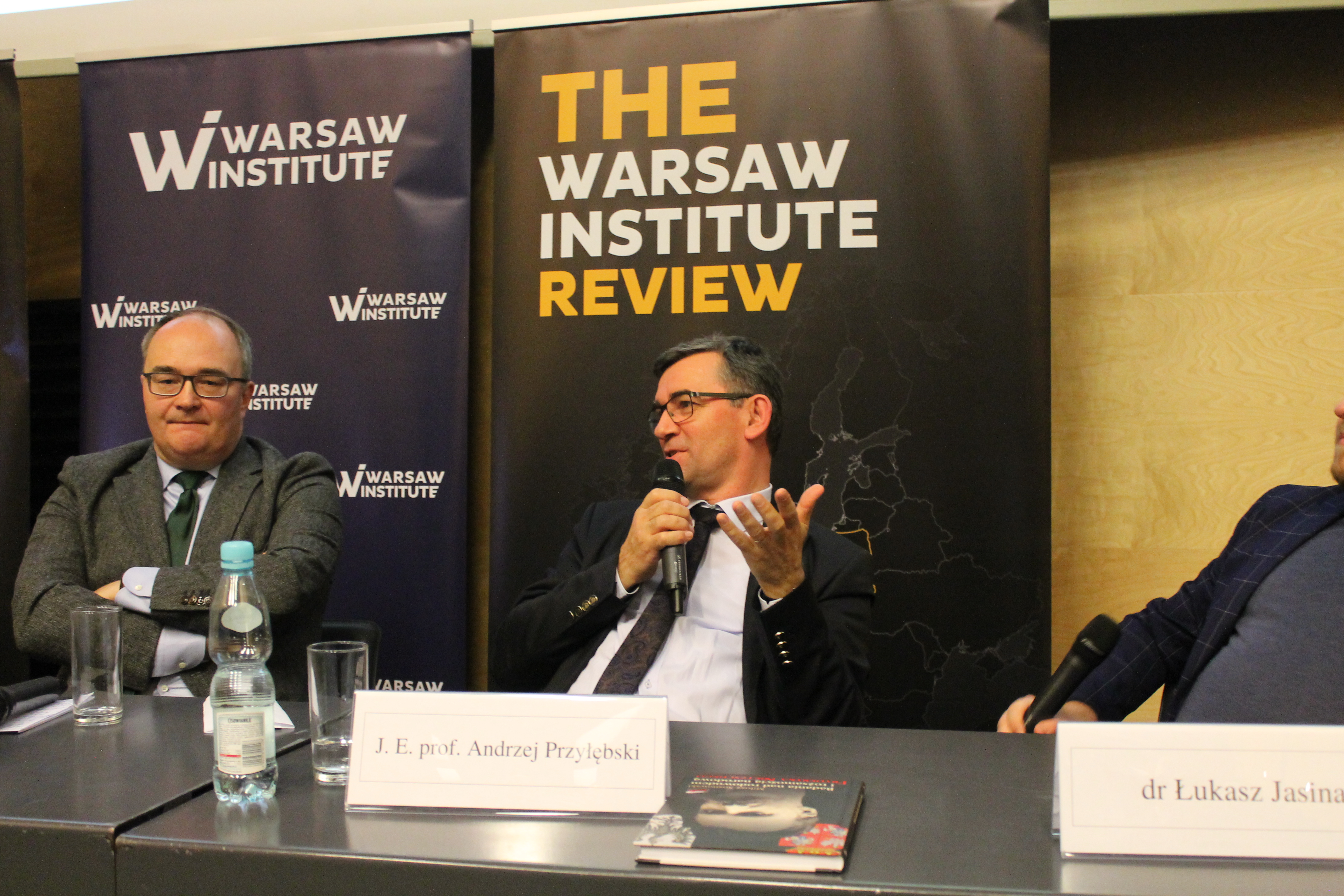 H.E. prof. Andrzej Przyłębski, the Polish Ambassador in Berlin emphasized that Poland must not only follow the historical policy of Germany and Russia, but even compete with these countries in building its own international message. He argued that German historians and diplomats believe that World War II began with the Holocaust and German aggression against Russia, in 1941. Every year, for 4 years, on September 1 and May 8, the Polish Ambassador in Berlin reminds them that the war began with the aggression of Germany on Poland, on the 1st of September, 1939. Professor Przyłębski presented the phenomeon of narrative, post-truth, historical policy and German diplomatic activities. According to the Ambassador in Berlin, the danger of researching history is giving up reaching objective truth and replacing it with “narrative building” – Historical politics creates a tension between history and what it can be used for. Often, the concept of truth goes to the background and gives way to the interests of states, as was stressed the Ambassador. We invite you to read the interview with H.E. Prof. Andrzej Przyłębski, carried out by the Editor-in-chief of The Warsaw Institute Review, Izabela Wojtyczka. 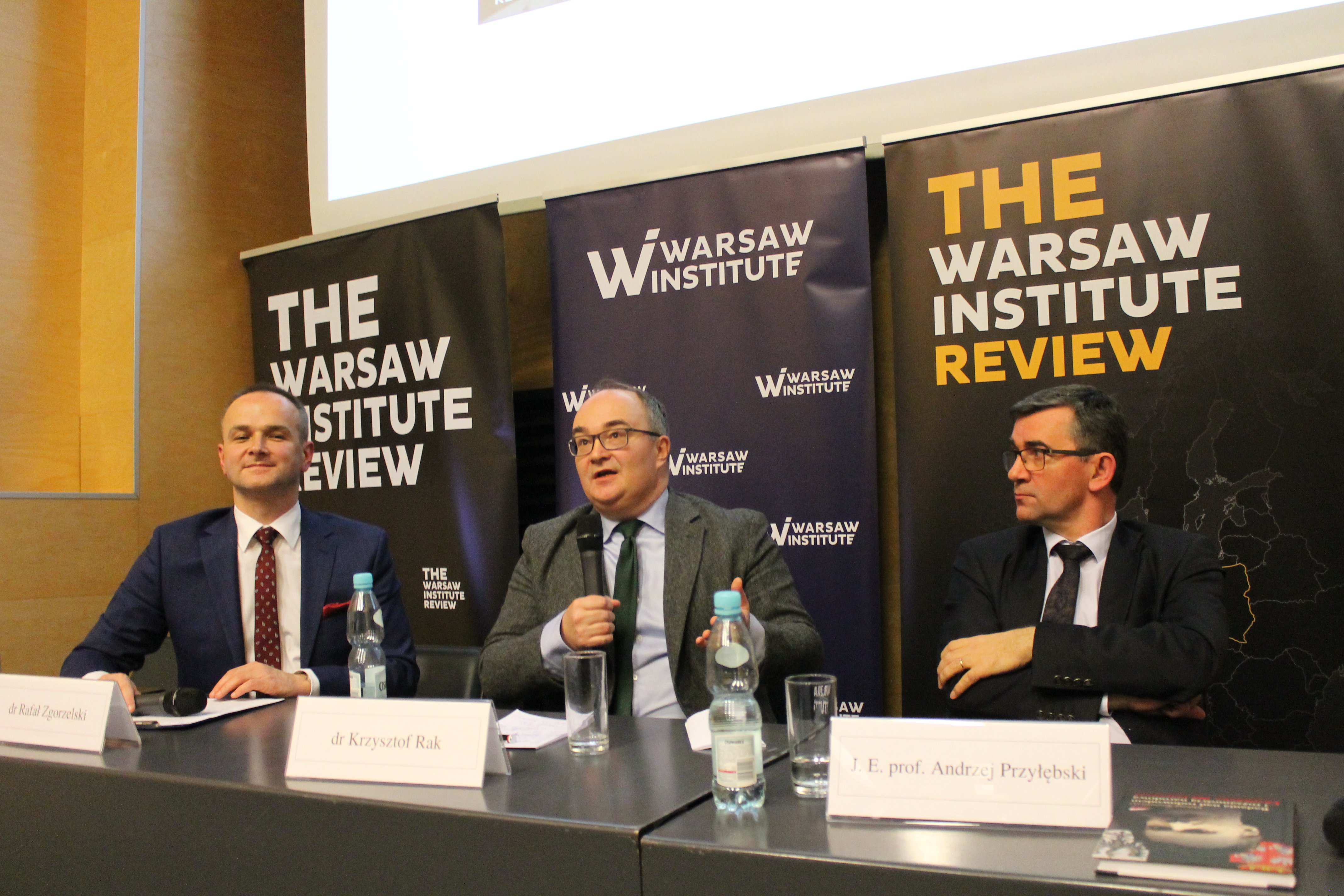 Dr Krzysztof Rak, the Director of the Polish-German Cooperation Foundation began his speech by defining the truth and about the need to be as accurate as possible when talking about history. He cited many terms, such as “mutual aggression”, “left-wing totalitarianism”, and “joint responsibility for the war.” – Using these political stickers is of no use – emphasized Rak – First of all, in European historiography is settled that Poland is jointly responsible for the outbreak of World War II. The second view is responsibility for the Holocaust – he added. The Director noted that Poland has a problem with historical policy primarily because it does not conduct research. – Do you know that in the last 30 years Poland has not written any stories about Polish-German or Polish-Russian relations? – he asked the audience. – On the other hand, Stalin’s archive is available on the Internet. […] We do not have Polish-German history books about the 1930s and 1940s. Let’s start researching – he added. Dr. Rak’s theses met with the comment of the Ambassador, who pointed out that European and global awareness of the responsibility for the outbreak of World War II and the Holocaust is embarrassing. 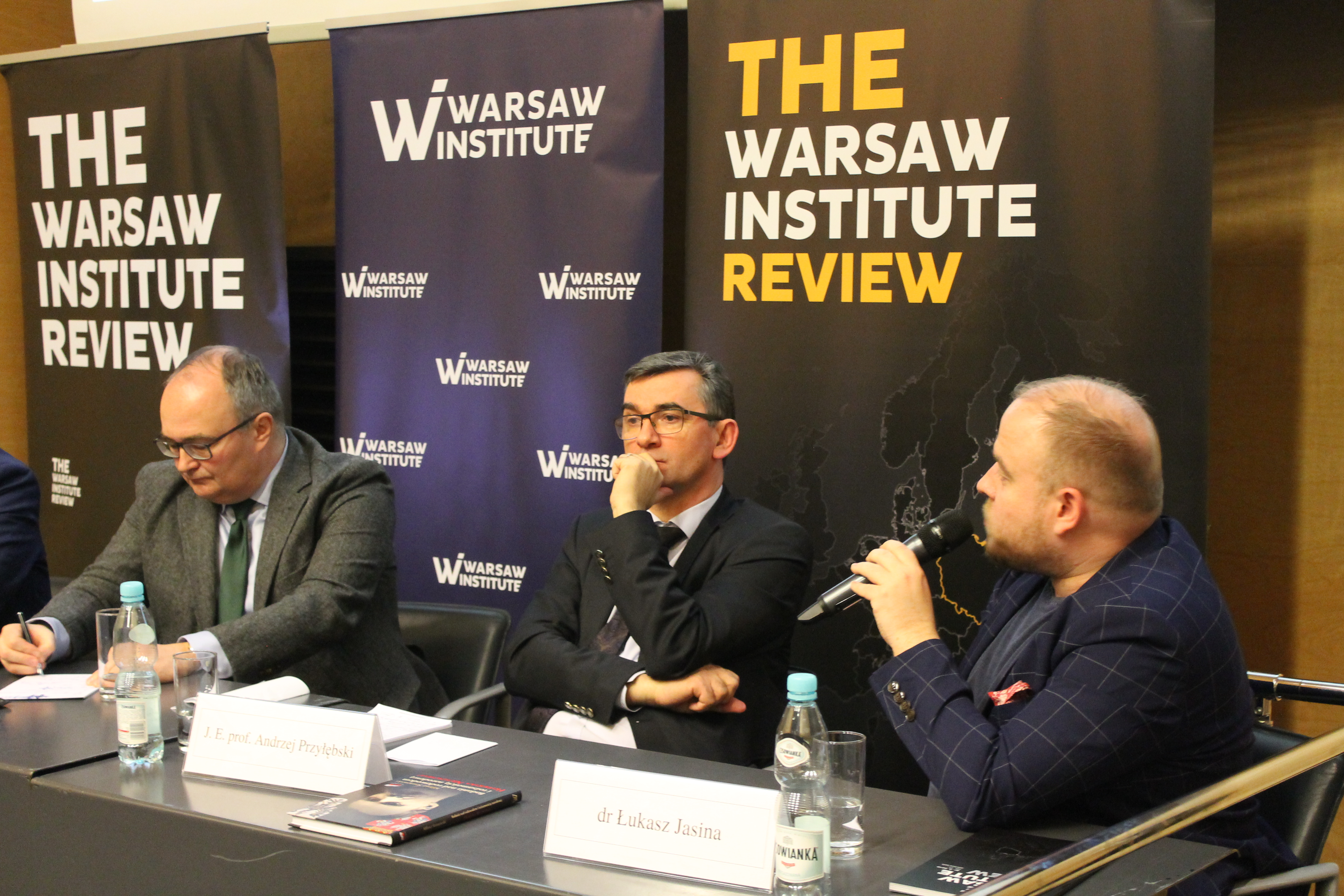 Dr. Łukasz Jasina – What to do to effectively fight such distortions of history? – asked moderator of the debate, Dr Zgorzelski. – One of many Poland’s problems is that we are children or grandchildren of people who survived this war. We know, we remember and we understand. We are aware of this. Over the past 30 years, we have not thought that not everyone must necessarily know about the tragedy of war – said Jasina. He emphasized that historical policy was “always carried out” and served the interests of states. In his opinion, in the nineties of the last century, a large part of intellectuals was deluded by the “end of history” and decided that her study did not translate directly into the present. – It turned out that historical policy is still strong, and it can be seen that those who are stronger also win in it, – he noted. In his opinion, Poland is only at the end of the beginnings, not the beginning of the end, a way to build its own coherent historical policy. 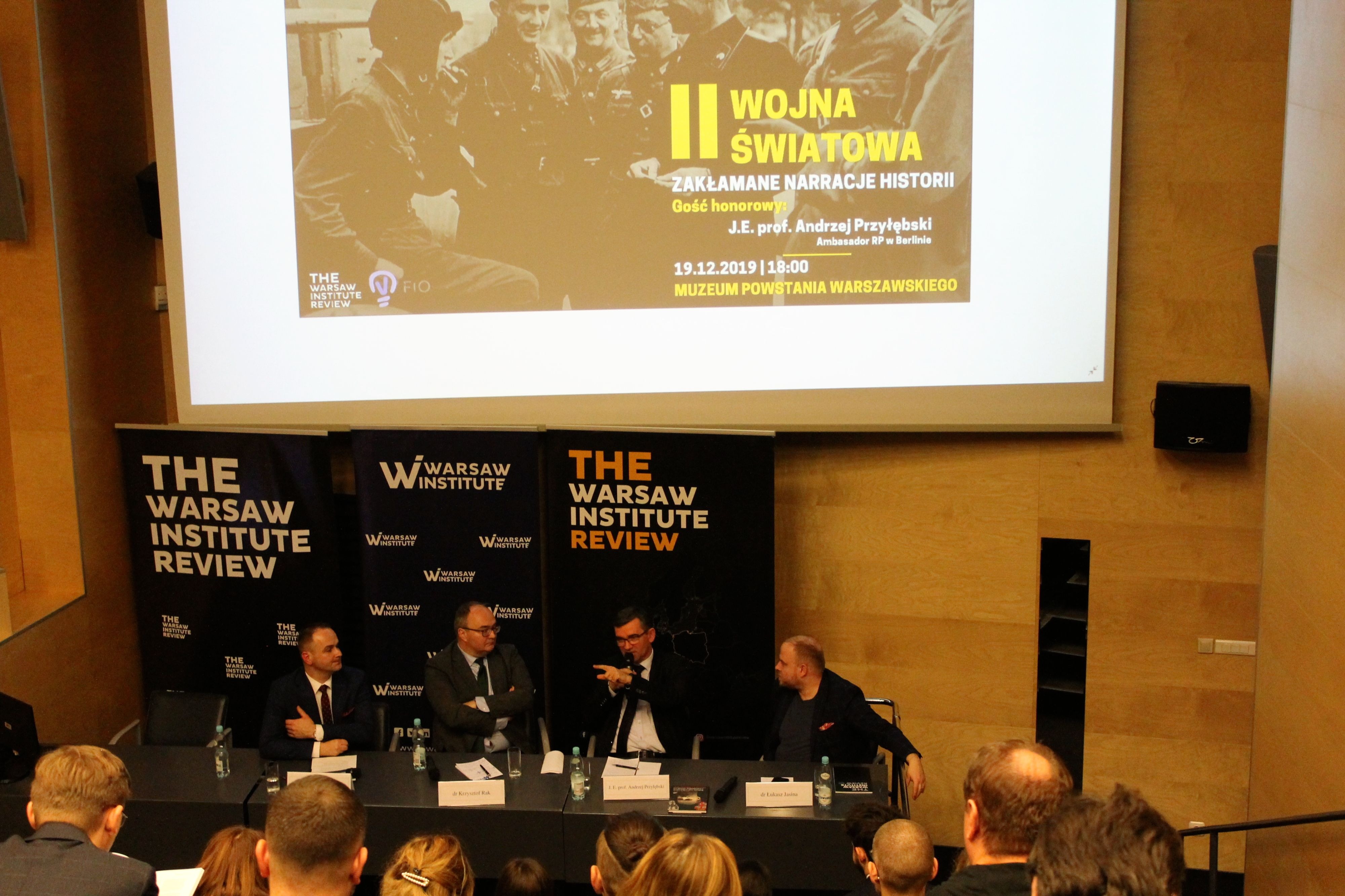 Ambassador Prof. Andrzej Przyłębski told a lot about his activities in Berlin. He quoted stories from the world behind diplomacy, showing the public the sensitivity and great importance of the Polish Embassy in Berlin. Of course, it could not do without addressing the subject of reparations – During talks with representatives of the German political class, the issue of war reparations is an extremely sensitive topic – said the Ambassador, adding that this topic is met in German diplomacy with confusion and silence. In this context, he explained that German historical memory is selective and that the history of the Holocaust plays a special role, rather than, for example, the issue of crimes against other nationalities – German historical policy consists in choosing historical facts and putting them together into a positive whole for Germany, and not total hypocrisy, as in the case of Russian foreign policy – he explained – the hypocritical and manipulated story presented in Russia is based on the assumption that it played only a positive role and other countries should pay back its debt of gratitude, added Dr. Jasina.

Participants of the debate, skilfully moderated by Dr. Rafał Zgorzelski, began a substantive and almost two-hour discussion on the contemporary historical policy of Germany and Russia attempting to assign Poland responsibility for the tragedy of the Second World War and the state of Polish research, communicating and promoting history. The whole meeting was interspersed with numerous stories of the Ambassador of the Republic of Poland in Berlin. These interesting cases emphasized the ruthlessness and selectivity of German narrative actions. The debate ended with a question session from viewers and current journalists. We encourage you to read the texts of experts participating in the debate and articles about the meeting for further insight.