Politically, Belarus is Russia’s junior partner while economically, Minsk comes as a vassal state of its larger neighbor that keeps its economy afloat. With all the more satisfaction, Lukashenko seized an opportunity to cut Vladimir Putin down to size as far as the politics of history and public image were concerned. While the big Red Square military parade was postponed due to measures to stifle the spread of the new virus, Belarus held a fully-fledged celebration to mark Victory Day. 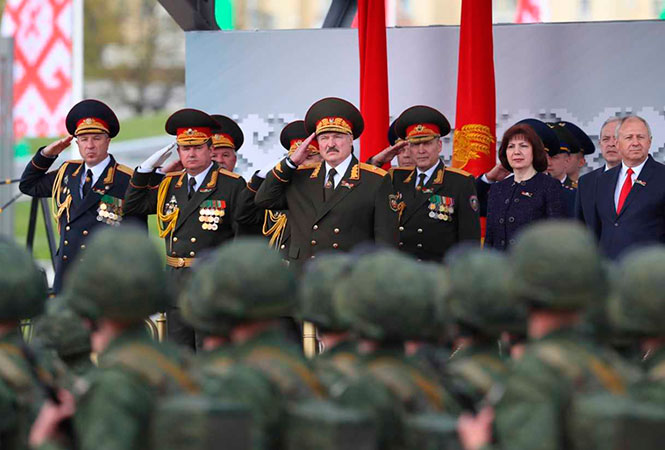 Russia –– which seeks to be the main heir to the Soviet heritage, including the victory over Nazi Germany –– curtailed its own observances, moving them from May 9 to September 3. Lukashenko refused to cancel his military parade, dismissing concerns about the coronavirus pandemic that took a grip on the country. Belarus boasted of holding the only parade in the former Soviet Union to mark the 75th anniversary of the defeat of Nazi Germany. Regardless of the current WHO recommendations, spectators lined the parade route as some 3,000 soldiers marched, and then watched a special concert. Among the attendees were also some elderly veterans. Lukashenko grabbed an opportunity to give Putin the needle as they both have been embroiled in some disputes over the plausible Russian-Belarusian economic partnership. Until recently, Lukashenko has been believed to be cast in the role of supplicant, with virtually no room for maneuver.

Much has yet changed since both the novel virus and the record-setting oil crash took hold. While the Russian president took on a defensive position, Lukashenko seeks to portray himself as a far more attractive and braver leader. This, of course, refers to nothing but his public image –– as strongly evidenced by the mere fact that the Belarusian president went ahead with the May 9 display despite the coronavirus pandemic. Lukashenko said he wanted images of Soviet veterans and their families to float past on Russian television, while “patriotic Russians would see him.” As Lukashenko was contemplating a military parade, Putin laid flowers at the Tomb of the Unknown Soldier just outside the Kremlin walls in what could be seen as a watered-down celebration. For the Russian leader, the failure he had suffered is far bigger as this year’s observance was poised to turn into a big political event. Putin had braced for the ceremonies in late 2019 and in January this year, once Russian-Western skirmishing in what is referred to as “memory wars” jumped to a new crescendo as the Russian president made efforts to champion Soviet war accomplishments and its major role in defeating Nazi Germany. Another reason for staging the display in Belarus, which still embraces Soviet mentality more than any other former Soviet state, could be efforts to boost Lukashenko’s popularity ratings right before the August 9 presidential election.