The visit of Polish FM in Bucharest, an Extended PL-RO Diplomatic Agenda

On February 1, 2018, the Romanian Minister of Foreign Affairs, Teodor Melescanu, and the Romanian President, Klaus Iohannis, met the Polish Foreign Minister, Jacek Czaputowicz. The visit to Bucharest was organized at the invitation of the head of the Romanian diplomacy, as both ministers reconfirmed the willingness to further develop bilateral relations on the basis of the Strategic Partnership signed in 2009. The talks also highlighted Romanian and Polish similar interests in the region, as members of the EU and NATO. A common Romanian-Polish intergovernmental consultation meeting could take place this year, for the first time. 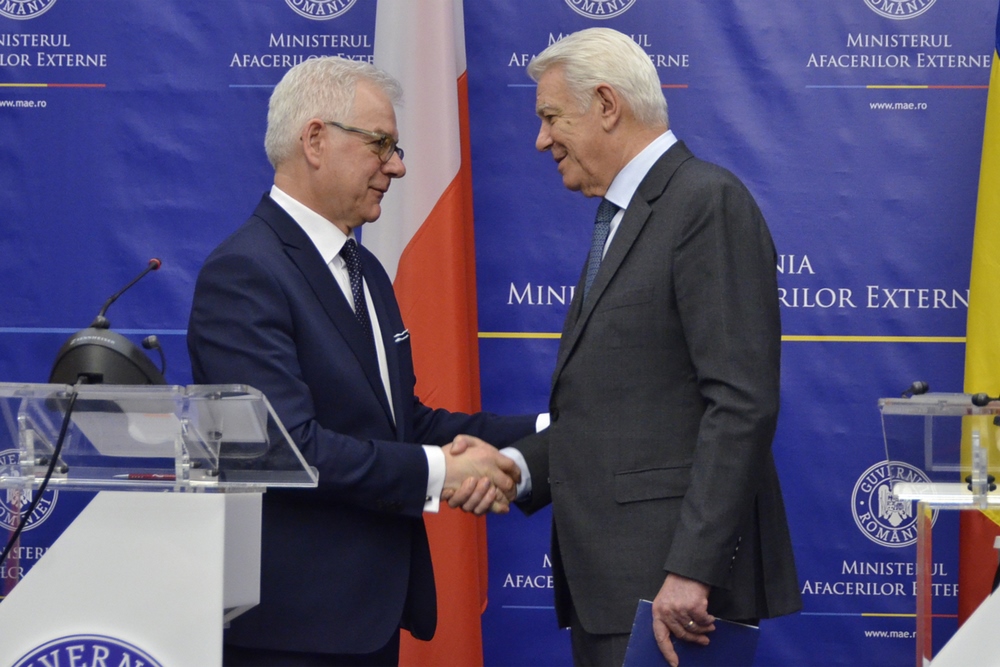 The Bucharest visit of the Polish Minister of Foreign Affairs, Jacek Czaputowicz, could give another dimension to the Polish-Romanian relations, as both Romanian Minister of Foreign Affairs, Teodor Melescanu, and Romanian President, Klaus Iohannis, stated that the cooperation between the two states must be strengthened further. During the official meeting, President Klaus Iohannis highlighted the excellent level of the bilateral relationship, confirmed by the frequent contacts at political level, especially at the level of the head of states. Also, the Romanian President has shown that it is a personal commitment to continue the development of the Strategic Partnership between the two countries, as the two states share common interests in the field of security and strategic cooperation, all this being crucial for the strengthening of the NATO flank and for the Alliance as a whole.

At the same time, Klaus Iohannis recalled the relevance of the Bucharest format (initiated by the President of Romania and the President of Poland) in promoting the common positions of the Eastern flank states on the main NATO agenda and welcomed the excellent Polish-Romanian cooperation in the preparation of the Three Seas Initiative Summit, to be organized by Romania this year. The Polish Foreign Minister stressed the importance of the Strategic Partnership with Romania, which must be further strengthened as 100 years of diplomatic relations will soon be celebrated. Minister Czaputowicz also highlighted the joint actions and objectives of the two countries in the field of security and the importance of the Bucharest format.

The talks between Minister Melescanu and his Polish counterpart were focused more on European issues, as the Romanian FM rejected EU’s idea of conditioning the European funds, as this would represent “a gross violation not only of the provisions but also of the fundamental principles of the European Union”. On the other side, Jacek Czaputowicz confirmed that “many EU Member States have signaled that they will not give a vote on the activation of Article 7 of the Treaty of Lisbon” and that “Poland will defend other EU countries in the region, including Romania, if we will think that they are being treated improperly”.

According to the Romanian FM, Poland is perceived as having a very constructive dialogue with the Commission and Romania will try to avoid at any cost a vote on Article 7. Melescanu’s recent declarations can be seen as the first Romanian official assumed position regarding the so long debated relation with the European Union, as Brussels recently issued concerns regarding the state of law, both in Poland and Romania.

As for Radu Magdin, one of the main Romanian regional analysts consulted by Warsaw Institute on this topic, the key element of the Bucharest visit was the freshly conveyed European conditionality. “Bucharest is right to be skeptical towards a mechanism that is not yet clearly defined and can affect its main interests. The alliance with Poland in this field, beyond bilateral friendship and military cooperation, is unsurprising, as the two major Eastern Europeans are concerned about a reshaped European Union, which must take into account their ideas, their voice and their interests.”

The next Polish-Romanian meeting at the level of heads of state will take place in Warsaw this June, under the Bucharest format, with Romania being a key partner for Poland.