The Success of the NATO Summit in Warsaw

The organisation of last year’s NATO Summit in Warsaw (8-9 July 2016) showed that Poland is not only a great organizer and an important member of the North Atlantic Treaty Organization (NATO) but first of all that the Polish government is strong enough to be able to actually decide on the security of Poland and Baltic states. 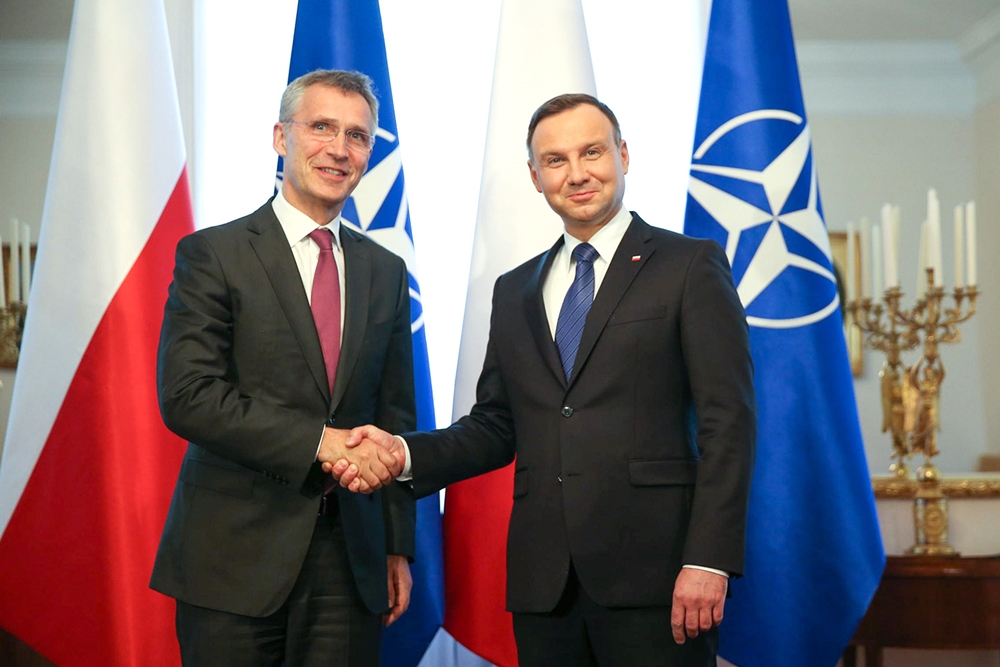 In many ways, NATO Summit in Warsaw may be considered as a breakthrough; for the first time in years, NATO focused on deterrence policy, the principle of Russian veto was broken and all member states were given the same status. However, the Summit had much more achievements, namely NATO’s Eastern Flank was strengthened, the willingness to accept Montenegro as a member state was confirmed as well as support for Georgia to join NATO was expressed.

During NATO Summit in Newport in Wales two years ago, the Islamic State was considered as the main threat to NATO member states. In Warsaw, one of the main themes was the fight against terrorism, including the ISIS, but it was a potential threat from Russia that became the number one topic. In April 2014, relations between NATO and Russia deteriorated when the former had decided to suspend its cooperation after Russia’s aggression against Ukraine. The tension between Russia and NATO has increased just before Warsaw’s Summit, after Russian military planes had repeatedly violated the airspace over the Baltic Sea. One example of such activities were Russian SU-24 fighter jets flying over the destroyer USS Donald Cook in international waters in the Baltic Sea. On the board of the warship, there was a Polish helicopter. The incident occurred in international waters 70 nautical miles (about 130 kilometres) far from Kaliningrad. In the light of such a political context and the lack of certainty as to the further actions undertaken by Russia, the decisions taken during Warsaw Summit were to reduce the risk of Russian aggression on the Baltic states, both in the case of a conventional conflict as well as a hybrid war. The breakthrough occurred after the decision to break the Russian veto. So far, only the part of allies could take advantage of the help as well as they could have at their disposal NATO troops deployed on their territories. Russia could use its veto for such countries as for example Poland. Thus, in spite of being a full-fledged member of NATO, Poland could not ask for the troops deployment when the country felt in danger. Such a change has appeared to be a return to the beginning of the Alliance, namely the mission of the absolute defence of its members, and, at the same time, all member states were given the same status.

As it was stated by Poland’s defence minister Antoni Macierewicz, the change that had occurred in Warsaw was comparable to Poland’s accession to NATO. It was considered as a breakthrough as well as it seemed to be important in the context of the geopolitical situation not only for Poland but for the entire North Atlantic Treaty. NATO has already made a decision that the Alliance would be evolving. And such is a result of the Russian lesson given to the world by the Kremlin. What needs to be emphasized, the former government even didn’t try to fight against the Russian veto principle, which, as it had turned out, can be removed if someone really wants to do so.

During the Summit, some decisions on the strengthening of the NATO’s Eastern Flank were taken with the aim of protecting the member states. Four NATO battalions, each consisting of 1,000 soldiers, will be deployed to Poland as well as to three Baltic states, that is to Lithuania, Latvia and Estonia. The United States will be the leader of the battalion in Poland, Canada will be in charge of the Latvian one, Germany will lead the Lithuanian battalion and the United Kingdom – the one deployed to Estonia. According to some initial announcements, apart from the United States, also the Great Britain and Romania will send their troops to Poland, with the former expected to base 150 of its soldiers. In Lithuania, a multinational battalion group will be composed of soldiers from France, Portugal, Norway, Belgium, the Netherlands and Luxembourg. The United Kingdom is expected to lead its battalion in Estonia, where it will deploy 500 soldiers. Also France and Denmark are supposed to supply one company each. Italy has equally announced that it would strengthen the Eastern Flank with 150 soldiers. Croatia has also declared its engagement. Poland, which will host the American-commanded battalion, will send its soldiers to Latvia. Moreover, on the basis of the Polish division’s command, a multinational command will be created, whose task will be to govern all battle groups. In addition, it was confirmed that the Armored Brigade Combat Team of the U.S. Army would be deployed in Eastern Europe for 9-month rotations. The team will count about 4,000 soldiers as well as the equipment. Its headquarters will be located in Poland.

So far, Russia could have expected that, in the case of an attack on member states located on the Eastern Flank, NATO would not take any defensive actions. Now, when NATO troops will be stationed in the Baltic states, military actions against these countries would automatically mean the allied countries’ involvement in the conflict.

Other provisions of the NATO Summit in Warsaw

NATO’s Summit organization proved that Polish state was able to guarantee the security to the participants of such a large and strategic event. Poland’s defence minister Antoni Macierewicz repeated that Poland had been chosen as the host and co-organizer of the Summit because it had been very well-prepared to guarantee the security of the heads of countries as well as the discussions themselves. Security issues were discussed at the national level as well as at the one of the Alliance. As for the Summit’s organization, Poland’s Ministry of Defence was represented by the Armed Forces Operational Command, the Military Gendarmerie and the Military Counterintelligence Service. However, the security services were provided by other organizations, including the Governmental Protection Bureau and the police. The efficiency of the services was confirmed by the peaceful course of the event. During the NATO Summit in Warsaw, there were four cases of drones violating the airspace over the Polish capital. They did not cause any damage as they were immediately eliminated.

The NATO Summit in Warsaw was important in many ways. In addition to the military and political aspects, one can draw general conclusions on the functioning of the Polish state and its government. Strong Polish state, whose structures and services are able to provide peace to its citizens and participants of international events at the highest level, constitutes the best investment in the security of the country as well as of NATO, which Poland is a part of. However, Polish authorities, who focus essentially on its national interest and are aware of the external threats:

Therefore, the NATO Summit in Poland is not only an obvious victory of the country as well as of the Baltic states in the context of the protection against military threats but it also constitutes a success of Polish citizens who can be sure that interests of their state are the government’s priority issue.