Summary: Is this the end of China’s “peaceful development” strategy?

The May’s proceedings of the Chinese parliament that took place in the shadow of the growing tension between Beijing and Washington brought surprising decisions, affecting the current policy of the People’s Republic of China. The China General People’s Assembly voted to adopt a document enabling interference with the freedoms guaranteed to Hong Kong in the 1984 Agreement between the PRC and the United Kingdom. Furthermore, the fragment on peaceful unification with Taiwan was removed from Chinese documents and for the first time in history no economic growth plan was presented for the forthcoming year. 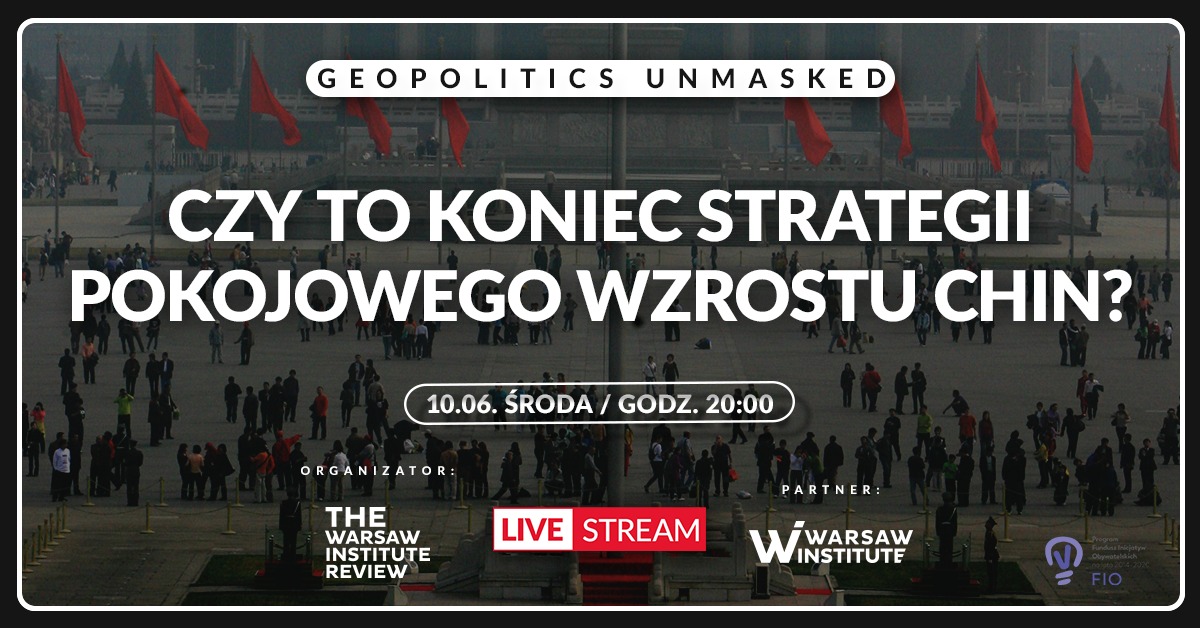 The above issues were raised in the online debate that took place on 10 June 2020. This time the guests of The Warsaw Institute Review were:
– dr Robert Rajczyk – expert at The Warsaw Institute Review, researcher on East Asia and political scientist at the University of Silesia
– Jakub Jakóbowski – main expert of the Chinese program at the Centre for Eastern Studies and author of numerous analyzes in the field of China’s domestic and foreign policy

The host of the program was the editor-in-chief of The Warsaw Institute Review – Izabela Wojtyczka.

During the debate dr Robert Rajczyk talked about the strategy shift in Chinese diplomacy. He stressed that the time of “submissive China” in an economic context compared to other countries had passed. He drew attention to the fact that China has always been a superpower except for a short break in the nineteenth century, and after the epidemic it will endeavor to achieve this status again.

Jakub Jakóbowski spoke about the situation in Hong Kong, the nature of Taiwan’s relations with China, and about the perception of the Middle Kingdom by the WHO and other countries on the international stage. He also presented his assessment of China’s future relations with other countries after the passing of the pandemic and analyzed the results recently noted by the Chinese economy.

In the Q&A part, our guests answered questions asked by viewers of the event. Among the issues raised during the meeting were: the policy towards Hong Kong in the context of relations with the USA; Polish policy towards Beijing; an alliance of China and Russia in opposition to NATO; the intensification of Beijing’s activities in international organizations or the likelihood of another crisis between China and Taiwan.

We strongly encourage you to watch the event on our YouTube channel!

We invite you to our future events – every week on Wednesday at 20:00 on our Facebook page and YouTube channel.