Putin Threatens He Could Send Military Support to Belarus

What Vladimir Putin said about deploying “a law enforcement reserve assistance” to Belarus to help Alexander Lukashenko is nothing but part of a psychological game that both Minsk and Moscow are playing up against the West. This is yet another time when Russia makes threat of a “second Donbas” to discourage the EU and the United States to put more pressure on the regime in Minsk. Yet a Russian military intervention is somewhat unlikely. Something else is far more important than that: this is the first time the Kremlin has ever publicly reserved the right to intervene in a neighboring country whilst overtly declaring support for one of the sides to an internal political conflict. 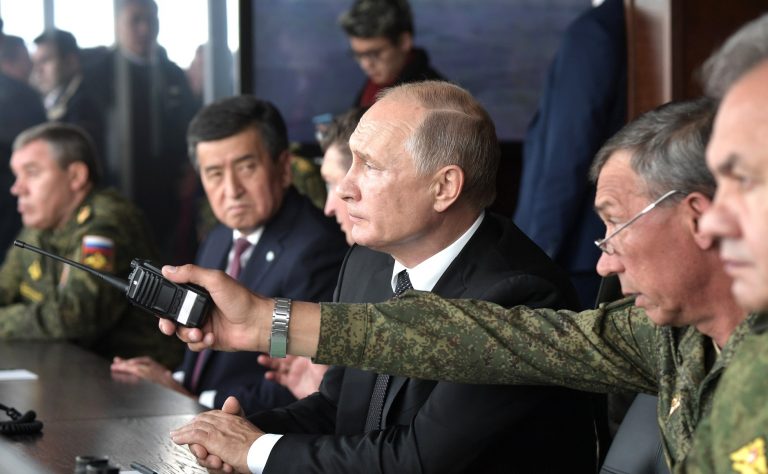 Speaking on Russian state TV Rossiya on August 27, Russian President Vladimir Putin said Alexander Lukashenko had asked him to set up “a certain police reserve that might be dispatched to Belarus if necessary.” He said the new reserve force would not go into Belarus unless “extremist elements using political slogans as cover cross a certain boundary and start setting fire to cars and houses, or try to seize government buildings.” “We are behaving much more restrained and neutral in relation to the events in Belarus than many other countries, both Europeans and Americans,” he was quoted as saying. Yet Putin added Russia had an obligation to help Belarus with its security under what he named as “the two countries’ close alliance”, stressing “the deep cultural, ethnic and linguistic ties between the two nations.” Putin publicly reiterates that Russia sees Belarus as part of its sphere of influence, an element of what is known as Russkiy mir, or the Russian world. The Russian leader also discussed a constitutional reform as suggested by Lukashenko. Of course, he took the role of a natural mediator though Moscow denies having contact with the opposition. According to Putin, a political solution of the crisis may involve a dialogue between a group of regime representatives and “moderate” opposition members, followed by a long-term process of systemic changes leading to constitutional updates, and possibly also the maintaining the status quo. Later that day, Russian Foreign Minister Sergey Lavrov and his Belarusian counterpart Vladimir Makei emphasized in a phone call that Belarus “did not require foreign interference in its political processes, attempts to destabilize the whole situation or unilateral mediation bids as imposed from the outside,” thus criticizing what the European Union, the United States, and some EU nations, including Poland and Lithuania, have done so far. On August 28, Belarus has kicked off three-day military drills. Not incidentally, in its statement, Belarus’s defense ministry added the drills would take place in the Grodno area in western Belarus. A day before, Lukashenko again accused Poland of pushing territorial claims, saying Poland might annex the Grodno region if the situation in the country deteriorates further and Belarus disintegrates.