The First Caspian Economic Forum, during which politicians and business representatives from five Caspian Sea states have met, has been recently held in Turkmenistan. As anticipated, the event has become a perfect occasion to announce a series of declarations and agreements by individual policy makers. Among the published reports, those regarding the plans of constructing the Trans-Caspian Gas Pipeline, which is greatly supported by the US and EU, seem particularly interesting. 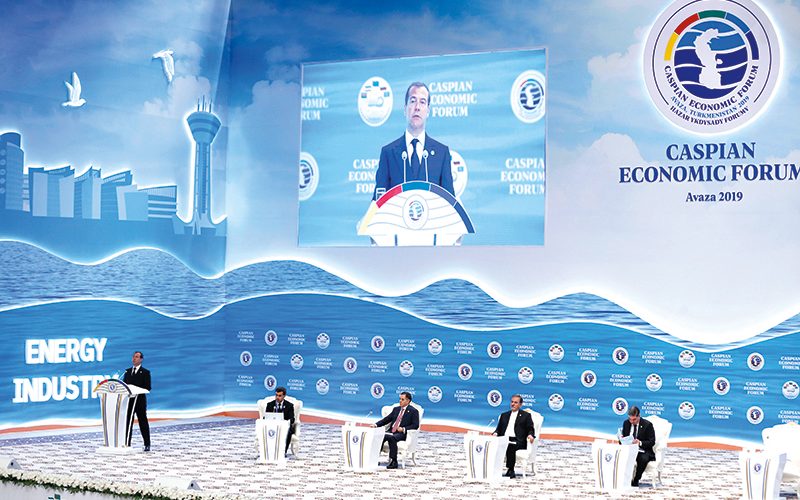 Over the past year, many commentators said that the chances for building the Trans-Caspian Gas Pipeline, an underwater connection that has been planned for over two decades to transport Turkmen gas (the fourth-largest natural gas reserves in the world) via Azerbaijan to Europe while bypassing Russia’s territory, have increased significantly. The source of their optimism was the 2018 signing of the Caspian Convention, a document between the five coastal states that provides a basis for regulating the disputed status of the Caspian Sea in various areas. The text of the Convention reads that, as a matter of principle, the freedom of laying pipelines is to be guaranteed within the body of water, provided that the states through whose waters the new infrastructure would be run give their consent. Therefore, in theory, this should, in fact, open the way for the construction of the Trans-Caspian Gas Pipeline. However, as is often the case, the devil is in the details.

First, although it has been over a year since the signing of the document, not all of the signatory parties have ratified the Convention, for example, Iran and Russia still have not completed the relevant procedures (though the latter has announced that it will do so soon). Second, to build the Trans-Caspian Gas Pipeline, an additional agreement between Azerbaijan and Turkmenistan on the delimitation of their maritime borders is still needed (the Azerbaijanis themselves say that this is a very sensitive matter requiring time). Third, but not least, the Caspian Convention assumes that all states with access to the body of water have the right to issue opinions on potential investments in terms of their impact on the natural environment. What has been suggested in the declarations voiced during the Caspian Economic Forum will most certainly be used by the regional opponents of the project in order to block its implementation.

Russia and Iran against the gas pipeline

On August 12, still during the Caspian Forum, Russian Deputy Prime Minister Sergey Prikhodko spoke on the issue, clearly highlighting that the coastal states, including, of course, the Russian Federation, would participate in a potential assessment of the environmental impact of the Trans-Caspian Gas Pipeline. He also added that the mere guarantee of such a possibility is, according to him, enough to prove that “the protection of the unique Caspian Sea ecosystem has absolute priority over any hypothetical economic projects”. It seems as if the statement may be easily treated as a suggestion that the plans to build the Trans-Caspian Gas Pipeline may be sabotaged by Russia, which is currently the only state that can act as a supplier of Turkmen gas to Europe.

An even more direct declaration came from the Director of the National Iranian Gas Company who simply stated that the construction of the gas pipeline on the bottom of the Caspian Sea could result in “serious damage” to the natural environment of the region, making “Iran against” the project. Similarly to the Russians, the Iranian side also seems to promote its own interests, aside from caring about the protection of nature. As proposed by the aforementioned representative of the National Iranian Gas Company, an alternative solution to transporting gas to Europe would be to use … the Iranian transmission infrastructure.

Although both the Russians as well as the Iranians were trying to cool off the excitement surrounding the Trans-Caspian Gas Pipeline project, there were also some voices in favour of the implementation of the investment heard during the forum hosted by Turkmenistan. In particular, the European Union publicly called for more advanced talks on the idea of possible financial support for the project through EU funds for the integration of gas markets. It can therefore be concluded that in this way Brussels has confirmed its interest in the construction of the pipeline.

Almost at the same time, the media in Turkmenistan informed that a certain consortium had declared its eagerness to carry out a contract for the potential implementation of the gas connection. According to the reports, several European companies, including Edison Technologies GmbH, MMEC Mannesmann GmbH and Air Liquide Global E&C Solutions, together with China’s SINOPEC Engineering Group, are interested in constructing the Trans-Caspian Gas Pipeline. The problem is, however, that France’s Air Liquide has already … categorically denied the revelations, while the rest of the consortium members are being silent. As a result, it seems as if the interest of European companies in the potential construction of the Trans-Caspian Gas Pipeline still remains a matter of the future.

The mentioned declarations regarding the plans of constructing the Trans-Caspian Gas Pipeline have surely been received with great interest in Washington, implying that it is not a coincidence that a few months ago, President Donald Trump sent a special letter to President of Turkmenistan Gurbanguly Berdymukhamedov expressing hope for the implementation of the project. It seems as if the White House expects that the construction of the pipeline will bring a period of political stability in the region, contribute to the further diversification of gas supplies to Europe as well as create opportunities for US companies. The latter, and this is not fake news promoted by the Turkmen media, could presumably want to have a share in a potential further division of Turkmen exploration licenses.

Author:
Mateusz Kubiak – graduate of Eastern Studies and International Relations at the University of Warsaw. He works as an energy sector analyst, also professionally deals with the Caucasus region and Central Asia.