Not All Russian Oligarchs Pay Homage to Putin

Representatives of Russian business industry may feel particularly unhappy with the situation worldwide, with particular regard to the Russian-Western conflict. Only a part of Moscow-friendly oligarchs, including Timchenko and Sechin, and state-run giants are compensated for by losses triggered by sanctions the West had imposed on Russia while other firms, especially those owned by private entities, are expected to deal with the situation on their own. Russian President Vladimir Putin is in need of money to revive the country’s economy so the government’s policy is essentially aimed at forcing big business to invest in the domestic market while bringing back all financial assets from the outside. This is also fuelled by a number of repressions from Putin’s trusted siloviki, causing sleepless nights to entrepreneurs. Forced to struggle with the lowering approval ratings, Putin decided to depict how the authorities and the business are able to unite, with representatives of the latter showing full loyalty to the Kremlin. It did not succeed adequately, though. 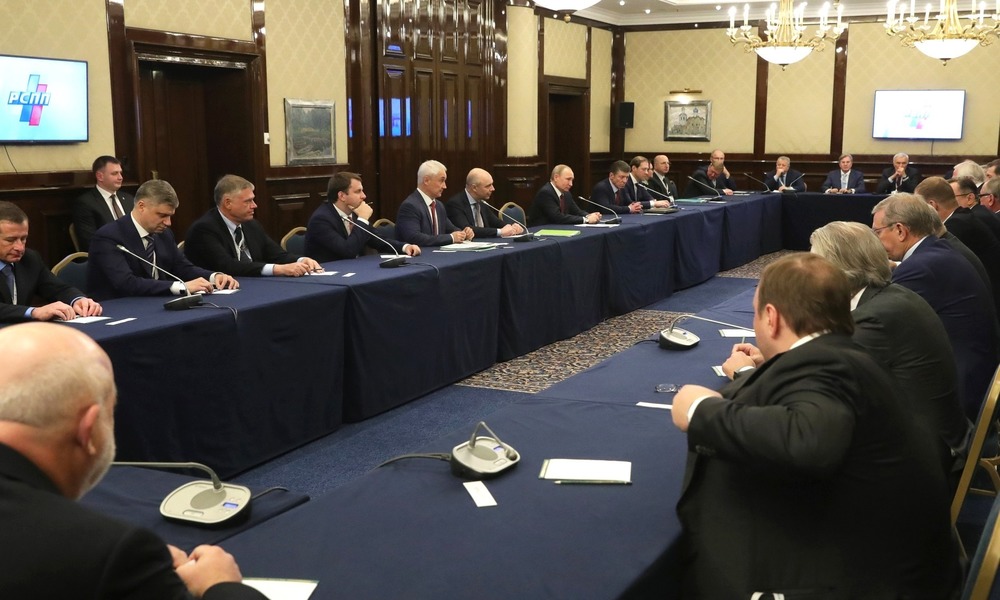 On March 14, an event of the Russian Union of Industrialists and Entrepreneurs (RSPP) was held in Moscow, aimed at showing to the public and the West that Russian authorities and business go hand in hand while no sanctions can hinder Russian interests. Also, Putin sought to convince the oligarchs, saying at the meetings with management of the federal force structures that the state and its service should take efforts to ensure proper functioning of the business. Naturally, this is only an empty statement, as exemplified by siloviki’s attempts to target entrepreneurs on the pretext of fighting against financial fraud and corruption.

A day ahead of the congress, the head of the Russian Union of Industrialists and Entrepreneurs Alexander Shokhin said that business milieu expects U.S.-Russia mutual relations to be finally regulated, adding that Western restrictions against Moscow will only intensify, with no possibility to mitigate their impact or even to lift all sanctions. The recent event was also held to demonstrate friendly ties between the state and business circles, which is to prove that no sanctions are capable of blocking Moscow’s interest. When addressing the audience, Putin voiced his expectation that the Russian business will provide Russian funds to fuel investments in the country. In exchange, entrepreneurs require the government to offer better operating conditions, mostly those of siloviki, due to omnipresent corruption in the country.

The president later held a private meeting with members of the RSPP bureau board. It was attended by twenty-eight businessmen, including Shokhin, presidential aide Andrei Belousov, deputy prime minister Anton Siluanov and Dmitry Kozak, ministers Denis Manturov and Maksim Oreshkin and head of Russia’s central bank Elvira Nabiullina. Of Russia’s top ten richest oligarchs and members of the RSPP, according to Forbes, four failed to arrive at the conference, among whom were Lukoil’s CEO Vagit Alekperov, head of Interros Holding Vladimir Potanin, Alfa Group chairman Mikhail Fridman and USM Holdings’ founder Alisher Usmanov. Also, other Russian billionaires and RSPP members were absent, including Leonid Mikhelson, Gennady Timchenko, and Roman Abramovich. Interestingly, among absent oligarchs was also Alekperov who had not missed any of the RSPP meetings before. They all excused their absence with business trips outside Moscow that day, which, however, may also be interpreted as their distrust to the regime. In other words, Putin’s ambition to show loyalty and respect of the business milieu to the Kremlin appeared unsuccessful.