The Warsaw Institute Review’s latest expert debate, titled “Message, fake news and disinformation in public space”, took place on December 3 this year in the Main Auditorium of the Old Library of the University of Warsaw. The event consisted of 3 presentations of media and geopolitical analysts, followed by a Q&A with the public, and concluded with a networking session over refreshments. 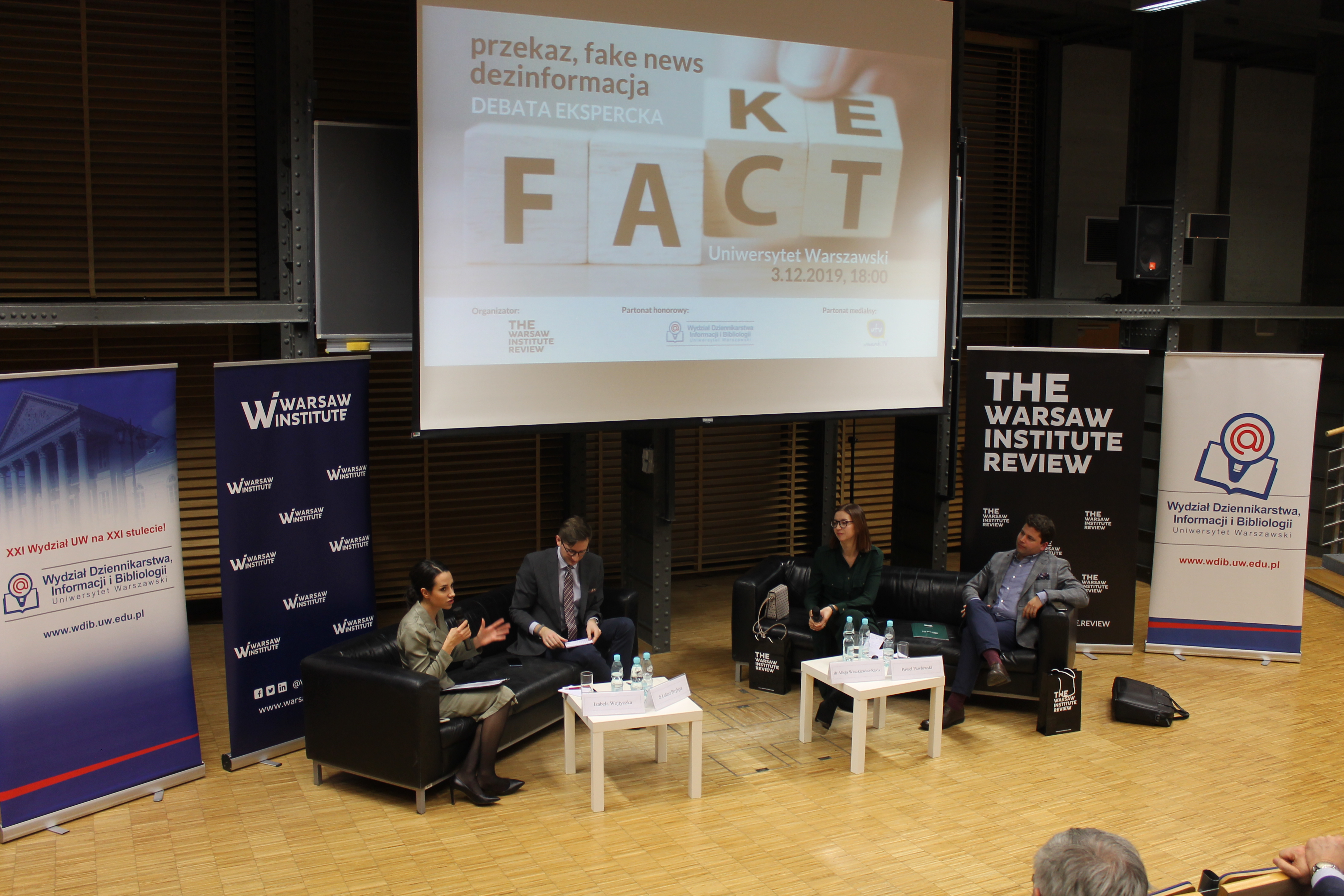 As per the character of this WIR debate, put together by WIR Communications Specialist Mr. Łukasz Biernacki and the WIR editorial staff of the geopolitical magazine, it provided another opportunity during which theoretical knowledge of experts is blended with the realities of the international situations.

WIR Editor-in-Chief Ms. Izabela Wojtyczka and moderator of the session, opened the event with welcoming remarks, some insights and apt starting argument points on the theme, as well as introducing the expert panelists and underlining their unique approaches and extensive research which aptly complement one another and give a well-rounded evaluation. 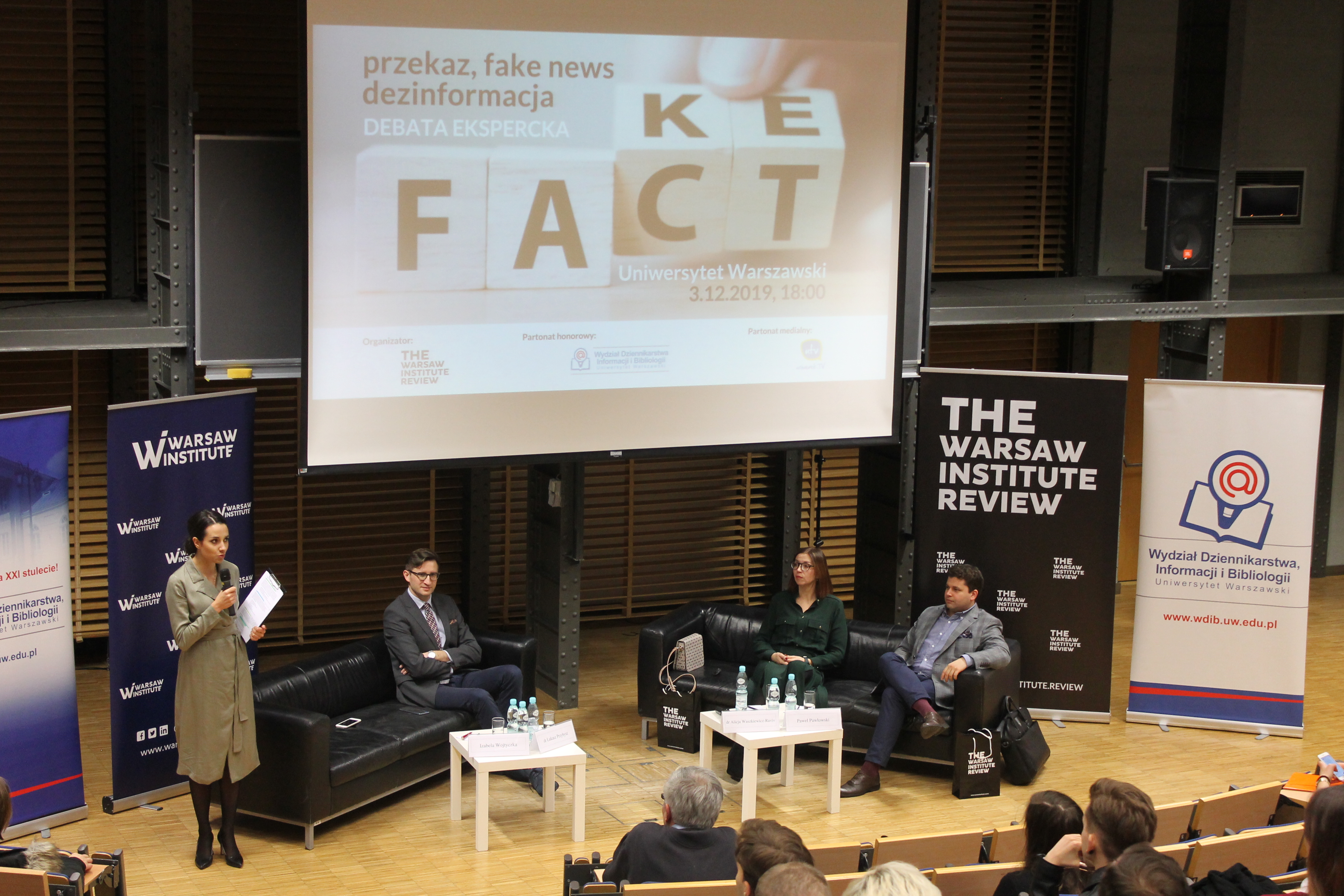 As such, the panelists each provided a core presentation in informative and intriguing addresses, as well as a launch pad for the discussions. First up, a communication and psychological specialized research by Dr. Alicja Waszkiewicz-Raviv – a Professor at the Faculty of Journalism, Information and Bibliology at the University of Warsaw. In her lecture, “Image and information as tools of persuasion”, she presented the issues surrounding the informativeness and imaginability of an image and its widely underappreciated power of persuasion. The difference between the acquisition of textual and visual information turned out to be really perplexing – as when we see the text, one tends to think “Okay, someone could have written it differently. It may be fake”, whilst when an individual sees an image, the individual by him or herself formulates corresponding information by their own initial assessment, and hence so it is regarded to be widely true and automatically accepted, as otherwise would be going against one’s own deductions – elaborated Dr. Waszkiewicz-Raviv. The presentation was also an occasion to dive deep into terms from the field of communications and psychology, such as visual immersion or iconic memory, and was a great insight to consider the social assimilation of information. 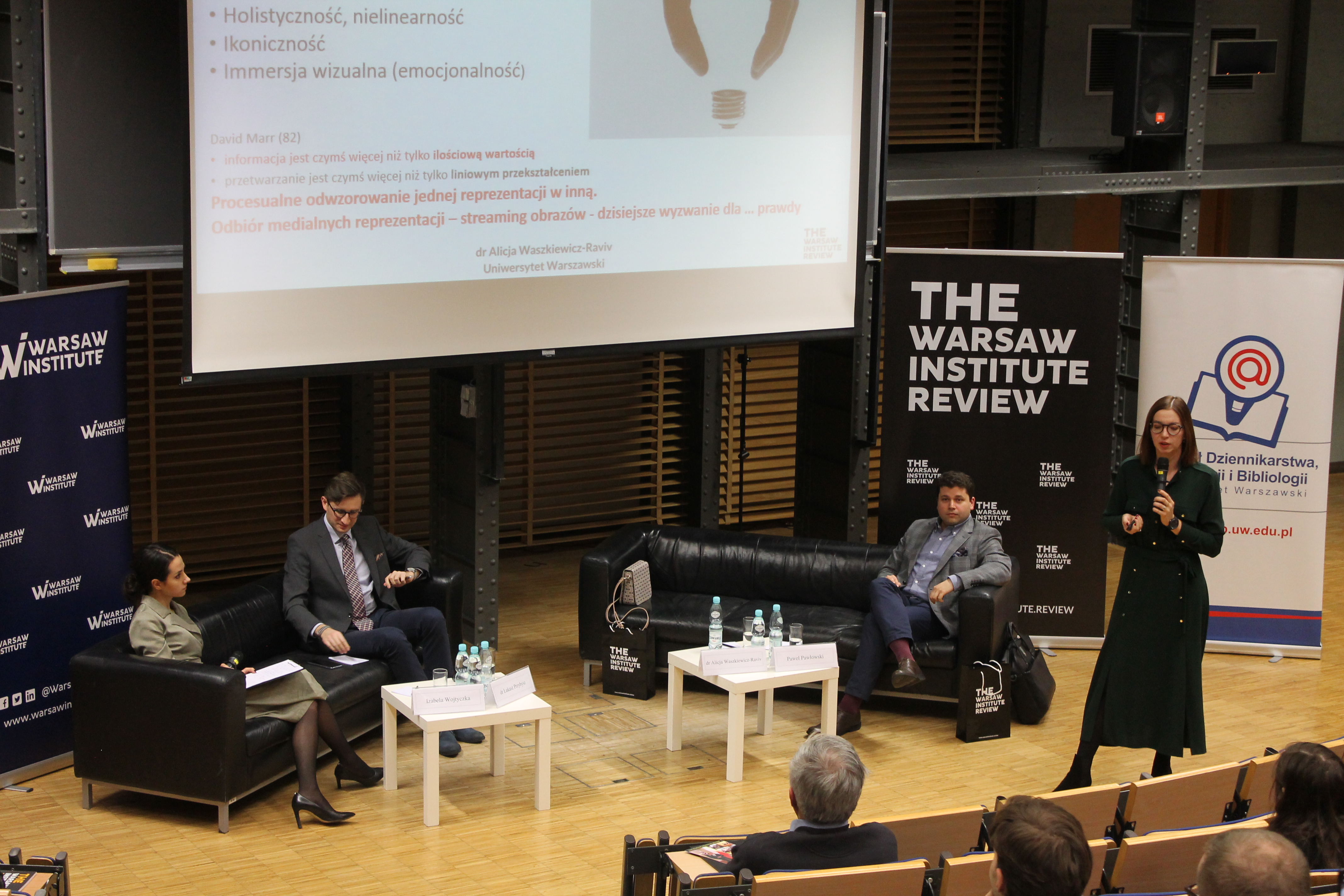 Secondly, the presentation of Dr. Łukasz Przybysz – a professor at the Faculty of Journalism, Information and Bibliology of the University of Warsaw, put forward analysis on the genesis, development and danger of the phenomenon of fake news. During his lecture-style address, the Professor pointed out the problem of “infotainment” i.e. vital information exploited merely for entertainment purposes rather than genuine reporting, as well as posture, pseudo-events and information commotions, which, combined with the lack of time and often naivety of the recipients, turn out to be a huge threat to societies. An important fact highlighted by Dr. Przybysz is the problem of limiting himself to the so-called Information and social bubbles, which can be briefly explained as limiting information channels and dialogue platforms to those that draw information from the same or similar sources. The presentation indicated the importance of the necessity of ways to point out the errors of societies and a valuable tip for better verification of information that floods us every day. 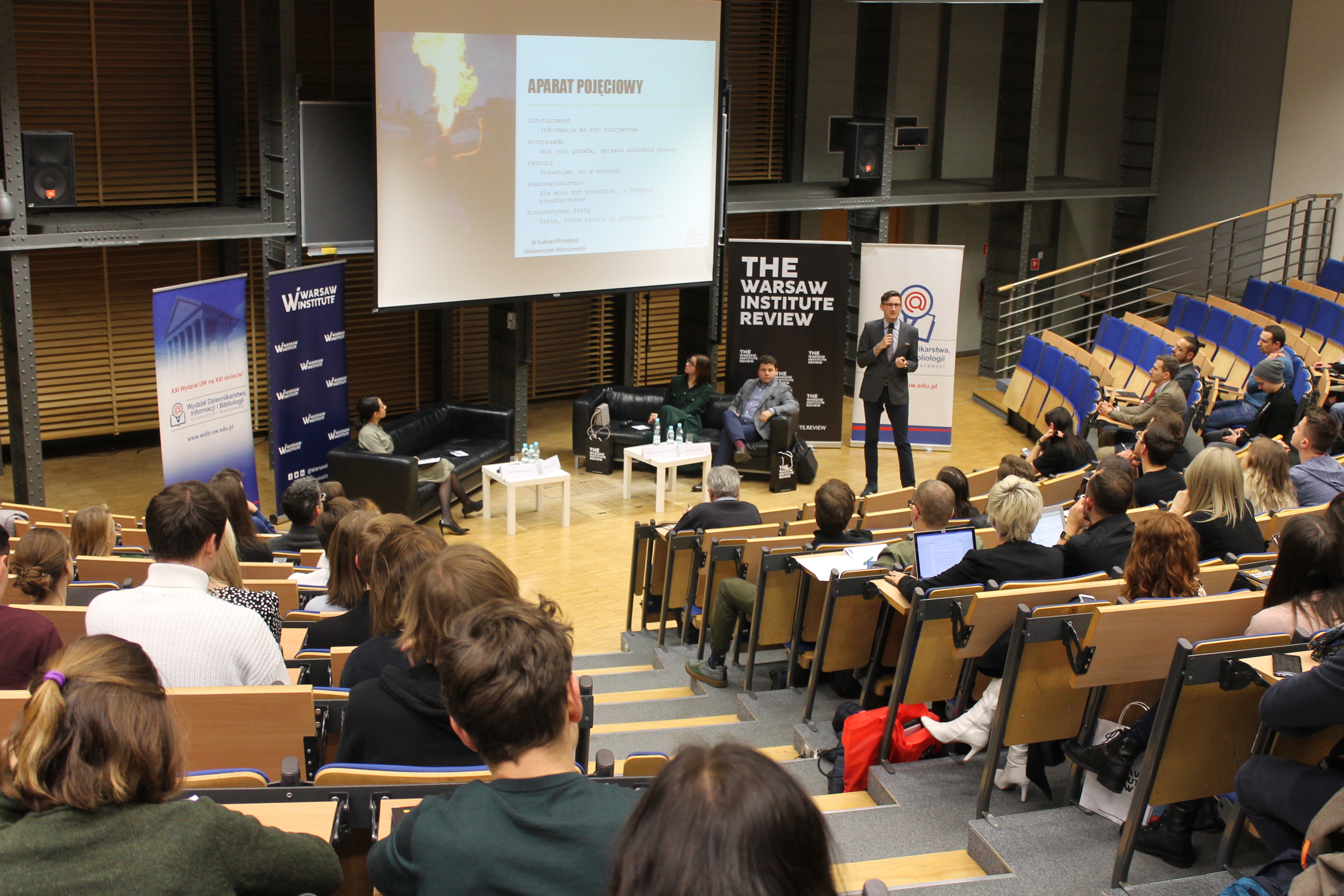 In the third lecture, Paweł Pawłowski – an expert of WIR and chairman of the Warsaw Institute Foundation Council – presented the origins and earliest document practices of international disinformation. As an author of numerous studies and analyzes, he elaborated to the participants, amongst other examples, on the historiography and modern understanding of the political and image propaganda of the Russian Empire, which had its roots in the 17th century. Suavely building on from this, Pawłowski proceeded to examine today’s examples of the information war being waged on the international arena, both on political and socio-cultural issues. It is imperative to distinguish where there is a hoax, a trail of unintentional misinformation, from deliberate deception and targeted disinformation campaigns. Contemporary dissemination of partly true or untrue information is aimed at creating uncertainty and its perpetrators could arguably see value in disrupting democratic processes, and as such, concretely implementing the objectives of disinformation entities – as the Warsaw Institute expert maintained. The lecture culminated with a quote from Pontius Pilate, “what is the truth?”, leaving the door open for the attendee’s own conclusions and interpretations of the news that comes to us. 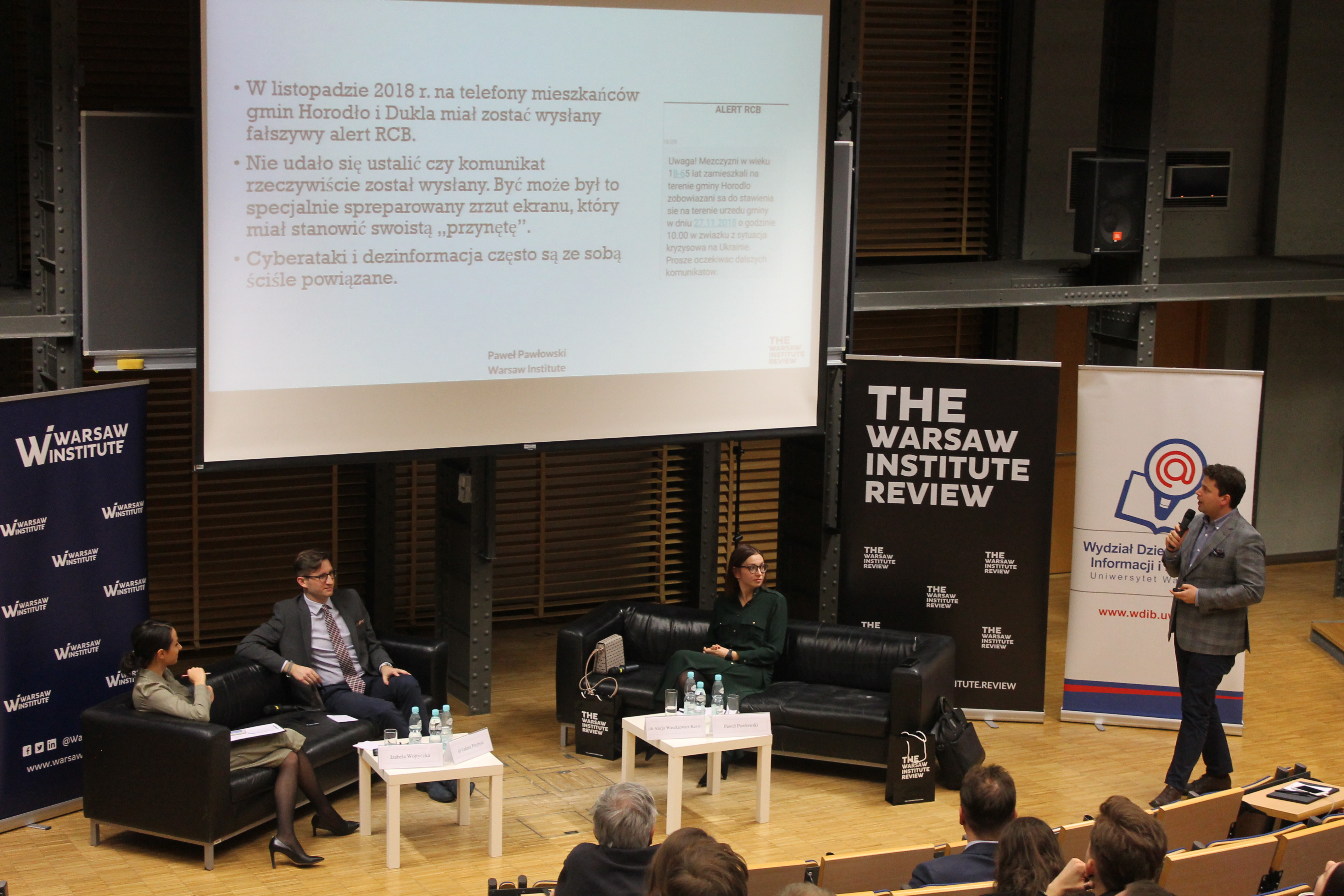 After these expert lectures, the schedule saw the debate moderator to explore the themes further with discussion, concrete and specific questions, as well as time allocated for questions from the audience. The Q&A session covered largely fake news in recent electoral campaigns, imagery perception and image manipulation in geopolitics, and on disinformation prevention measures at the disposal of the state, non-state institutions, as well as the general public.

Concluding the event, a networking session provided over a hundred of the event’s participants the opportunity to talk to panelists and experts representing media, social and geopolitical environments, as well as exchange business cards over refreshments. 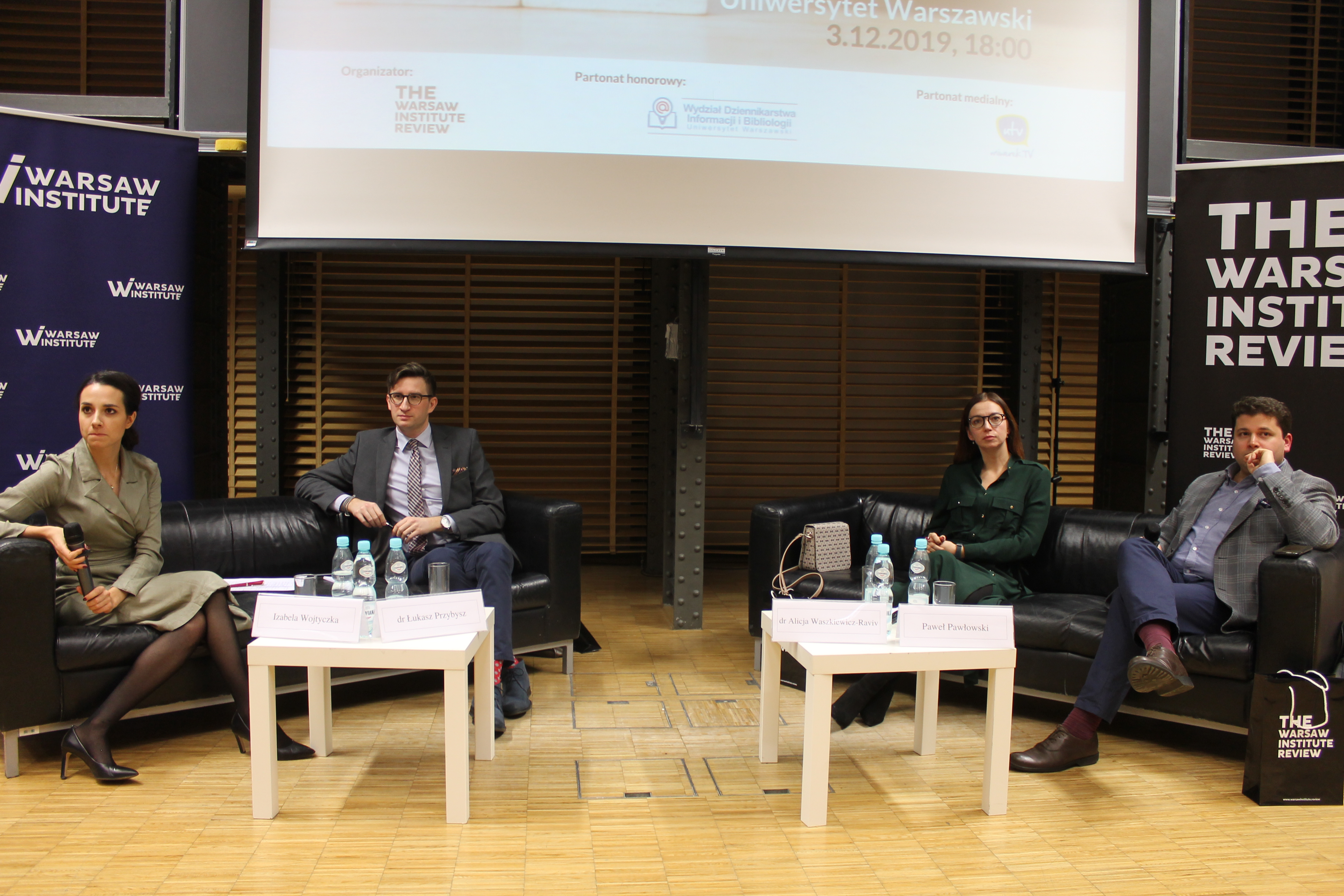 Another event of The Warsaw Institute Review, with many more most certainly planned in the future; it is a great honor for the WIR team for attendees to chat with us, and at quite a rate, be continuously expanding the community of driven individuals with an open attitude to knowledge, new experiences, and fruitful debate of serious matters pertinent to all of us. We invite you to the next events organized by our magazine, to get in touch, and to follow our activity on this site as well as in social media!