A meeting that brought the presidents of Ukraine and Turkey and the UN Secretary-General corroborates successful diplomatic efforts, an example of which was a deal to resume grain exports. The one who serves a pivotal role is Turkish President Recep Tayyip Erdogan. 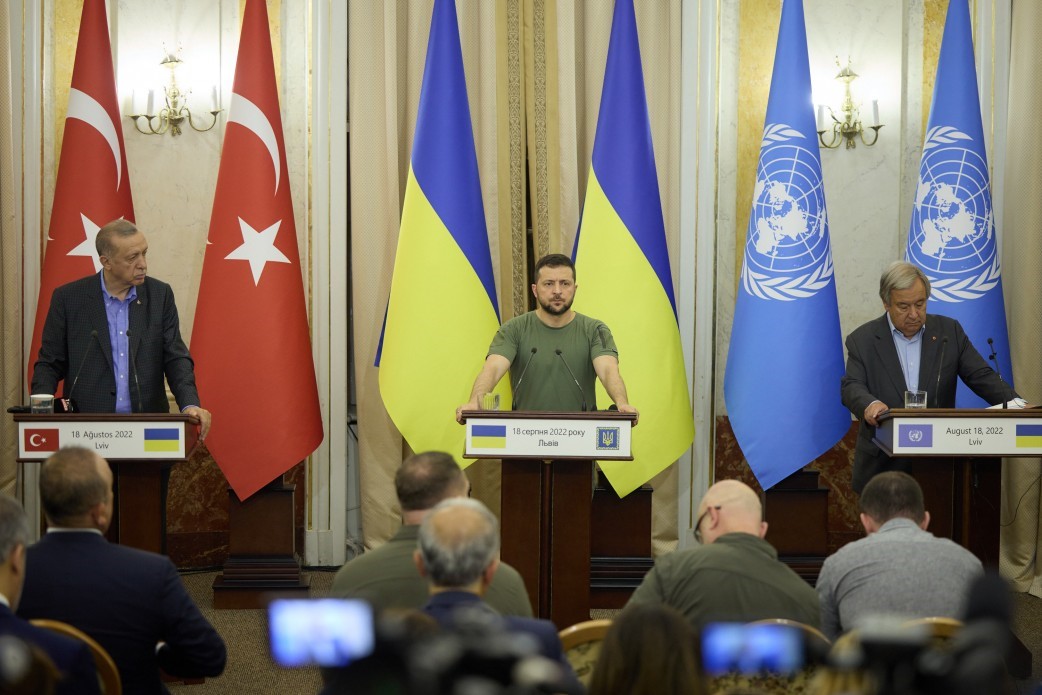 A tripartite meeting of President Volodymyr Zelenskyy of Ukraine, President Recep Tayyip Erdogan of Turkey, and UN Secretary-General António Guterres concluded on August 18 in Lviv. The meeting took place in the Potocki Palace, was not open to the press, and lasted 40 minutes. The three leaders discussed the resumption of grain exports, the situation in the Russian-controlled nuclear plant, and the release of prisoners of war Later that day, Erdogan had a phone call with Polish President Andrzej Duda. The Turkish president briefed his Polish counterpart on what he discussed with Zelensky and Guterres. “Nobody was pushing us to make concessions to Russia,” Ukrainian Foreign Minister Dmytro Kuleba said in a Facebook video. In Lviv, Erdogan told Zelensky that Turkey was ready to help rebuild Ukraine after the war. The two sides signed a relevant deal on reconstruction. Its first project could be to rebuild the Russian-destroyed bridge in Romanivka, a village near Kyiv, that runs from the capital to the war-ravaged cities of Bucha and Irpin. The presidents coordinated their acts on key issues: grain corridor, Zaporizhzhia nuclear power plant, and release of war prisoners. Erdogan, who met with Putin in Sochi two weeks ago, has pushed for a mediating role between the Kremlin and Ukraine–– earlier they had met in Tehran. Russian and Ukrainian officials are now unlikely to sit at the negotiating table while the last diplomatic talks took place in Istanbul, where Turkey has actively participated in sealing the grain exports deal. In July Russian and Ukrainian officials signed two separate UN and Turkey-backed deals, both aimed at allowing grain exports to leave Ukraine amid a global food crisis. Meanwhile, Erdogan is pursuing his own agenda, seeking to become a key actor in the region. Despite its siding with Ukraine, Turkey purchased Russian gas and welcomes Russian tourists as well as it has no choice but to team up with Russia in Syria. Erdogan is now mediating between the warring sides, seeking to maintain friendly ties with both. Turkey seems to be the only one to project a balanced air between the warring sides as other countries––like India or China––either took sides with one of them or came into a conflict with one warring party (as Israel did).