The Latest Issue of “The Warsaw Institute Review” – no. 7

Seventh issue of “The Warsaw Institute Review” – the English-language quarterly about Poland and the region of Central and Eastern Europe – has been published and sent in a prestigious printed version of up to 1,500 copies to major research, analytical and expert centers around the world. 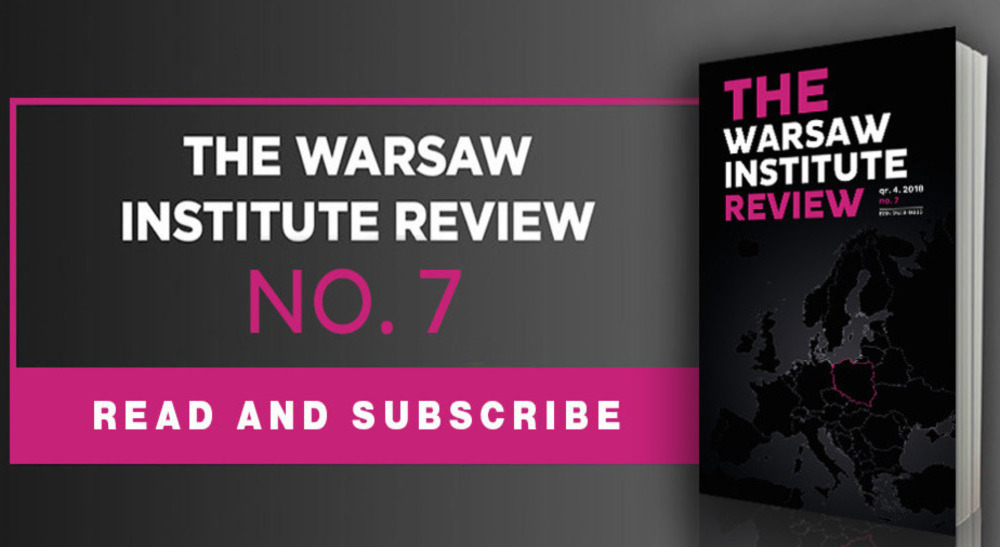 This number is very special. On September 10, the Visegrad Group Contribution to European Security – Common Challenges and Goals conference organized by Warsaw Institute took place. Panelists from the Visegrad Group countries discussed on disinformation, the problem of uncontrolled migration and the role of organizations such as NATO in ensuring security in the Visegrad region as well as throughout Europe.

In the latest edition of The Warsaw Institute Review, there are four articles summarizing and developing topics discussed during the conference, but also raising new topics that are extremely important for the countries of the region. Maciej Małecki, the Chairman of the Parliamentary Commission for Energy and the Treasury, opened the conference with a speech in which he stressed the importance of the Visegrad Group for the region, how much its Member States are connected, both historically and in modern times. Speech by Maciej Małecki opens this issue.

Among the authors of the texts in the latest issue are, among others:

• Laurynas Kasčiūnas – Lithuanian political scientist, analyst, publicist and politician, Member of the Sejm of the Republic of Lithuania,
• Tomasz Grzegorz Grosse – European expert, political scientist and sociologist, professor at the University of Warsaw, head of the European Union Politics Department at the Institute of European Studies of the Faculty of Political Science and International Relations,
• Krzysztof Rak – Managing Director of the Foundation for Polish-German Cooperation, historian of philosophy, translator, publicist, expert in the field of international relations.

Laurynas Kasčiūnas analyzes the phenomenon of hostile propaganda and disinformation and their impact on contemporary Lithuanian society. It indicates what elements constitute the greatest threat and who cares most about the destabilization of the situation in Lithuania. Professor Tomasz Grzegorz Grosse discusses democracy in the context of the European Union. He points to the phenomenon of democratic deficit, i.e. the lack of adequate legitimacy of the Union in the provision and protection of democracy in the Member States. Krzysztof Rak, in turn, describes the contemporary national state, indicates its significance for European culture and why neoliberal ideas of liquidation of nation states pose a threat to the future of Europe.

The magazine also includes other articles, including Dr. Piotr Bajda on security structures within the Visegrad Group, as well as Dr. Robert Rajczyk on the nature and complexity of the conflict in the Balkans and the steadily growing tension between Serbia and Kosovo.

The goal of The Warsaw Institute Review is to provide foreign opinion-forming centers with the most important information about contemporary Poland and its international environment. The main areas of interest are international relations, energy security, defense industry, defense, historical policy, culture and all other key issues for Poland and Central and Eastern Europe.